Formula E breaks new ground by not only coming to Mexico for the first time but by also holding its first ever none street race. The race will take place on a revised lay-out of the Autodromo Hermanos Rodriguez but will make use of the massive stadium section and the Peraltada curve. 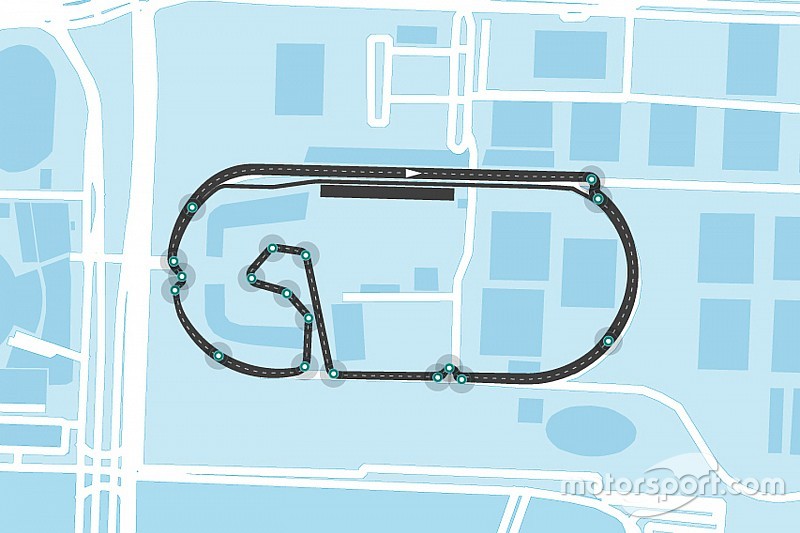 Whilst personally I prefer seeing the cars on a street track it will be interesting to see them race on an actual designed race track. I imagine the wide run off areas will mean there will be far less likelyhood of a safety car. This of course will mean that energy management will be key as they'll be no get out of jail free card as usually happens. The king of energy management in the field is of course the ever loveable Nelson Piquet Jr however, due to the fact his NEXTV car's rear end is so chunky that it keeps getting late night calls from Sir Mixalot, I don't expect him to be able to capitalise. It would be very surprising to see anyone else but Renault E-DAMS be the fastest car here but there is a glimmer of hope as the only other time these cars have driven on an actual circuit was during testing at Donnington and at the time it was Audi Abt that had the pace. I expect we'll be looking at a Buemi vs Di Grassi situation with Sam Bird possibly coming to play if he is having a good day. I expect that for most of the season to be honest.

All three of those drivers have team-mates of course but none of them really seem on it. Nico Prost has been so bad this season there is talk of replacing him with Carmen Jorda and as nice a bloke as Danny Abt is I'm afraid he really is nowhere. JEV in the other Virgin is a bit of a head scratcher though as we know how good he can be and I haven't decided yet whether he is just off form or Sam Bird is just that good. The other possible interlopers are the Dragon and Venturi teams. Venturi have designed both chassies and its obviously quite good with the Dragon boys being up there more or less but managing to throw away really good results. Venturi's problem is its awful driver line up and whilst they've got rid of Jacques Villeneurve they still have Sarrazan trundling around. Can't help but think a better driver would be getting better results.

Other things to watch out for will be Antonio Felix Da Costa (Team Aguri) and Robin Frinjs (Andretti) grabbing last years cars by the scruff of their neck and making them competitive with the rest of the field. They've been doing it all season and neither has really got the credit they deserve for it. A quick mention to Nathanal Berthon who was also doing the same thing before being dropped in favour of Mexican money Salvador Duran. Other things to look out for will be Bruno Senna hitting something or someone and Nick Heidfeld being unlucky.

The race will run on Saturday 12th March but due to snooker (yes fricking snooker) ITV4 will not be showing the race live. They will run in later in the evening as if it was live after the snooker has finished. Its all a bit annoying when you think how many channals they have! Don't worry though Formula E have come to the rescue and will be streaming the race live and completely free on youtube for all UK viewers! Hurrah.

Any thoughts on the series and it coming of the streets and on to a circuit?
Last edited: 17 February 2016

Valued Member
I reckon Buemi is the favourite for any non-mad Formula E race: he's got the best package.

The big question tends to be who joins Buemi and di Grassi on the podium, and in which position.

Contributor
So just a reminder to one and all that this is taking place on Saturday. Due to ITV4 faffing with the snooker UK viewers can now watch it on Youtube or on BT Sport Europe. BT Sport usually get the highlights but have stepped up to cover it live this time round. ITV4 will be showing an 'as live' version after the snooker.

Valued Member
9:45 this evening on BT Sport, if you get it.

I can't wait. I've been looking forward to this event all month.

Yeah bit gutted that itv4 have got to wait til after the snooker. Especially when they got 4 itv channels & itv 3 will only be showing repeats of midsummer murders for the 100th time. Although I feel No one can stop buemi, head & shoulders faster than majority as he shouldve won from back of grid last time out but for that stellar defensive drive from bird
Last edited: 12 March 2016

Staff Member
Valued Member
Well I finally remembered to watch the e-prix. Slightly dissapointed if I'm honest. There was plenty of nose to tail action but the revised Mexico circuit seemed almost impossible to pass on. That said, Di Grassi's fan boost aided pass on D'Ambrosio was great.

The track coverage is still awful with most events being missed and then not shown or those that were caught live being shown from absolutely awful camera angles. That massive block of driver positions and power remaining takes up far too much of the TV as well.

That said, I did enjoy bits of it and will try and remember to watch the next one.

Valued Member
I thoroughly enjoyed it. Great battle for 2nd and 3rd and then it turned out to be a battle for 1st.

It was an ok race i would say saved by entertaining end with d'Ambrosio & buemi saga. which i thought would end in big crash
& instead we had a tense podium similar to multi 21 in Malaysia. but as I said majority wasnt great as that circuit was just too tight to try & make a attempt stick without smashing the car infront out of the way just look at di grassi could easily pull a 10 sec gap in 10 laps

But we need to need to adopt that podium in formula 1 where we can. cos I loved how they can get down to walkway because it would help them get closer to fans

Valued Member
Di Grassi got that 10s lead to some extent from the Custard/Moose battle.

That s what I was meaning, that buemi 1 - 1.5s quicker than d'ambrosio a lap but just couldn't get through because it was too tight & couldn't get any momentum with it being so stop start

But how about this shock news that Lucas di Grassi has been disqualified because Di Grassi’s car that he used for the 1st part of the race, was found to weigh 886.2kg, 1.8kg under the 888kg minimum. Abt has decided not to appeal the decision .The decision handing victory to Jerome D’Ambrosio. means di Grassi is now 22 points behind Sebastien Buemi

Contributor
Second time Di Grassi has been disqualified from a race win......second time d'Ambrosio has inherited it!

Bit disappointing the result changes after really enjoying the race but if the car is under weight it's under weight.

To be honest I was expecting a pen for either Buemi or D'Ambrosio to be the result changer after the race.
Last edited: 13 March 2016

I really felt for Di Grassi, he was so delighted with that win and was leading the championship too. You'd think the team could manage to get the car the right weight. Not that difficult surely?

Please run a legal car in every race.

Formula E Fans For A Challenge to the Moose.

Contributor
The silly thing is he actually did all the hard work and had all the pace in the second car.........which was the one within legal limits!

Valued Member
He overtook someone (admittedly Prost) in car 1, which suggests illegality on that track.

Contributor
Yeah I'd forgot about that one.

There has not been much comment on Post's unsafe release penalty. EDAMS managed to release him so he nearly went into his own team mate! I'm sure it was Co-ordinated really but talk about shooting yourself in the foot!

Oh and Duval missed out on a podium for ignoring warnings about track limits. I think the fact they all played video games before the race went to their heads.

Contributor
As F1Brits_90 said, it was an OK race but no more. Nowhere to overtake with the cars pretty well matched for speed despite the comparatively low downforce and presumably a good tow.