Staff Member
At 500fps, so amazing detail and in slow motion.

Staff Member
Premium Contributor
A great video but one thing it dosn't give is an idea of scale. It's worth keeping in mind that you could stand up inside one of those engine nozels if it was on its side, they were that big. 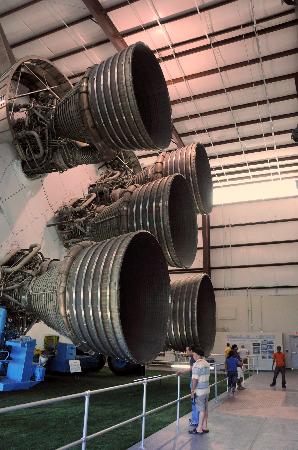 Contributor
From Brian Cox on tonight's Stargazing Live, "if you still think we didn't land on the moon turn over to ITV, I don't want you".
Nice one, Prof!

That's brilliant. A fairly incredible engineering challenge. I remember reading/hearing somewhere that the Saturn V rockets had over 6 million components. And if you manage to get the failure rate down to 0.1% (so 99.9% of components working perfectly for the duration - no mean feat for any system, let alone one of that complexity undergoing such a violent shaking!), you would still expect 6000 components to break per trip

If you've never watched In the Shadow of the Moon, you really, definitely should!

Valued Member
I don't what the level of computing power was back then (and it may be an urban myth) but today's average home PC has a greater capability than was used in these rockets. Astounding if true.
C

FB said:
I don't what the level of computing power was back then (and it may be an urban myth) but today's average home PC has a greater capability than was used in these rockets. Astounding if true.
Click to expand


Completely correct, in fact todays average calculator is more powerful in terms of calculations per second than the computers used for the Apolo program.

The thing is though, we would never have reached this stage of development in terms of computing and automation without the huge amounts of money poured into the space program and the associated work around it. Along with many many other things that are now common place which NASA or one of their associated suppliers own the IP rights or the originating ideas for (everything from velcro, microwave ovens, heat resistant work surfaces, development in motoring technology and even the seats you sit on when you go on a plane amongst just a few).

gethinceri said:
From Brian Cox on tonight's Stargazing Live, "if you still think we didn't land on the moon turn over to ITV, I don't want you".
Nice one, Prof!
Click to expand

I'm sure the beeb weren't happy with that remark
M

FB said:
I don't what the level of computing power was back then (and it may be an urban myth) but today's average home PC has a greater capability than was used in these rockets. Astounding if true.
Click to expand

Contributor
Ten things you may not have known about apollo 11

1. The Apollo’s Saturn rockets were packed with enough fuel to throw 100-pound shrapnel three miles, and NASA couldn’t rule out the possibility that they might explode on takeoff. NASA seated its VIP spectators three and a half miles from the launchpad.

2. The Apollo computers had less processing power than a cellphone.

3. Drinking water was a fuel-cell by-product, but Apollo 11’s hydrogen-gas filters didn’t work, making every drink bubbly. Urinating and defecating in zero gravity, meanwhile, had not been figured out; the latter was so troublesome that at least one astronaut spent his entire mission on an anti-diarrhea drug to avoid it.

4. When Apollo 11’s lunar lander, the Eagle, separated from the orbiter, the cabin wasn’t fully depressurized, resulting in a burst of gas equivalent to popping a champagne cork. It threw the module’s landing four miles off-target.

5. Pilot Neil Armstrong nearly ran out of fuel landing the Eagle, and many at mission control worried he might crash. Apollo engineer Milton Silveira, however, was relieved: His tests had shown that there was a small chance the exhaust could shoot back into the rocket as it landed and ignite the remaining propellant.

6. The "one small step for man" wasn’t actually that small. Armstrong set the ship down so gently that its shock absorbers didn’t compress. He had to hop 3.5 feet from the Eagle’s ladder to the surface.

7. When Buzz Aldrin joined Armstrong on the surface, he had to make sure not to lock the Eagle's door because there was no outer handle.

8. The toughest moonwalk task? Planting the flag. NASA’s studies suggested that the lunar soil was soft, but Armstrong and Aldrin found the surface to be a thin wisp of dust over hard rock. They managed to drive the flagpole a few inches into the ground and film it for broadcast, and then took care not to accidentally knock it over.

9. The flag was made by Sears, but NASA refused to acknowledge this because they didn’t want "another Tang."

10. The inner bladder of the space suits—the airtight liner that keeps the astronaut’s body under Earth-like pressure—and the ship’s computer’s ROM chips were handmade by teams of “little old ladies.”

Contributor
11. At the time of its construction the hangar where they filmed all that "hey look, this rocket is in space" and "thank goodness we can now use Supermarionation to pretend this man is in (almost) zero gravity" nonsense was the biggest construction on the planet
M

Contributor
I'm not convinced man landed on the moon it doesn't help when somebody asked Brian Cox "can we see the hardware that was left behind using a telescope" and conveniently the answer was "no we would need a telescope the size of manchester to do that" he then went of to say you can see Pluto's moons using a pair of binoculars and how we can see pulsars 14 billion light years away.

You want to see absolute proof we went to the moon with your own eyes forget it mate, we can tell you we went there in a dustbin but we just haven't got the tech to prove it.

Valued Member
Well thats to do with luminosity...! If all the moon landings were faked, explain Apollo 13 for me?

teabagyokel said:
If all the moon landings were faked, explain Apollo 13 for me?
Click to expand

Contributor
Actually I don't think all the moon landings were fake but I do believe the 1969 moon landing was faked to convince Russia that Kennedy was proven correct even though they did not have the tech or the know how to get there.....
M

And a vomit comet..

teabagyokel said:
Well thats to do with luminosity...!
Click to expand

And size... Plutos moon is quite a bit bigger than the lunar wheelie bin.

Valued Member
Is Charon still considered a moon of Pluto or is it now considered a "dual dwarf planet" or something equally as contrived?
M

Contributor
As far as i remeber Charon is the boatman that delivers the dead to Hades across the river Styx..