Elio de Angelis' rise to F1 was quite phenomenal. In only his 3rd season of racing, with backing from his rich Roman parents, Elio entered F1 with the Shadow F1 team at Monaco in 1979. Prior to his F1 debut Elio had won the Italian F3 championship in 1977 and the Monaco GP F3 support race in 1978. However, Shadow was not a team on the up and de Angelis and team mate Jan Lammers both struggled at the back of the grid.

The highlight of the '79 season came in the last race where Elio took fourth place at a wet Watkins Glen and this, combined with a a cash injection, secured Elio a seat alongside Mario Andretti at Team Lotus for 1980. 1980 was a season of rebuilding at Lotus after the disaster that was the type 80. The type 81 was a far more orthodox car and de Angelis managed a 2nd place at the second race of the year in Brazil but after this the car slipped back in to the mid-field. Towards the end of the season the Lotus cars started to regain some pace and de Angelis finished in the points in three of the last four races, ending the season with 13 points to Andretti's 1.

Mario left for Alfa Romeo in 1981 and Elio was promoted to team leader. This was the season of Colin Chapman's double chassis type 88 which was turned into the single chassis type 87 after being banned. The 87 was another mid-field car for Elio, and new team mate Nigel Mansell, to struggle with. Both drivers scored points over the season, Mansell even managing a 3rd place at the chaotic Belgian Grand Prix with Elio ultimately outscoring Nigel by 25 points to 8 over the season. The most exciting thing to happen at Team Lotus in 1981 was the return of the black and Gold JPS sponsorship.

1982, probably the most bizarre F1 season. Lotus introduced the type 91 and were still using Cosworth power whilst turbo engines started to dominate. The fragile turbo engines allowed de Angelis to take his first win at, of all places, the ultra fast Austrian GP. As the turbo cars fell by the wayside de Angelis took over the lead of the race with five laps remaining. In second place was Keke Rosberg, 10 seconds back, and what resulted was one of the most exciting finishes to an F1 race I have seen. Elio won by 0.050 of a second to give Colin Chapman his first win since 1979 and what was to be the last win for Team Lotus under his leadership.

For 1983, under the leadership of Peter Warr, Lotus got their hands on Renault turbo power. To put this to best use they designed the type 93T which I think can probably best be described as a cardboard box with a 1.5 litre turbo engine at the back. But Lotus got lucky. Gerard Ducarouge had just been sacked at Alfa Romeo and in just 6 weeks he had the type 94 designed and built. By seasons end the 94 was showing what it could do and Elio put it on pole at the European GP at Brands Hatch. de Angelis retired after 12 laps but Mansell went on to finish 3rd and outscored Elio 10 points to 1 over the season.

Mansell and de Angelis continued at Lotus for 1984 and Elio was "best of the rest" behind the all conquering McLarens of Lauda and Prost taking 3rd place in the drivers championship more through consistency that down right speed. Nigel Mansell meanwhile suffered with numerous retirements, as Elio had done in '83, to come home 10th in the drivers title race.

For 1985 Mansell jumped ship to Williams. This decision was probably encouraged by the comments of team boss Peter Warr, after Mansell crashed out of the wet race at Monaco, that "Nigel Mansell will never win a Grand Prix all the time I have a hole in my arse". Mansell was replaced by Ayrton Senna who had walked away from his contract at Toleman to join Lotus.

Senna won his second race for Lotus, at a wet Portuguese Grand Prix. Elio won the next race at San Marino but only after Alain Prost had been disqualified for his car being underweight. de Angelis was far from being embarrassed by Senna and by season end was only 5 points behind Ayrton in the drivers championship and enjoyed pole in Canada, although Senna managed 7 poles that season. However, it was obvious to him that the teams priority was the Brazilian and for 1986 he left to join Brabham.

This is where the story takes a dark turn. The "low line" BT55 was not a good car and de Angelis and team mate Riccardo Patrese were a long way off the pace. Elio took part in the first four races managing an 8th position at the season opener in Brazil and three subsequent retirements. In an attempt to improve the cars performance Brabham went off to Paul Ricard to conduct some testing. During this test Elio's car lost it's rear wing and the car cartwheeled over a barrier. de Angelis wasn't seriously hurt in the crash but was unable to extract himself from his machine unaided. In the resulting fire Elio suffered from sever smoke inhalation and died in hospital the following day. 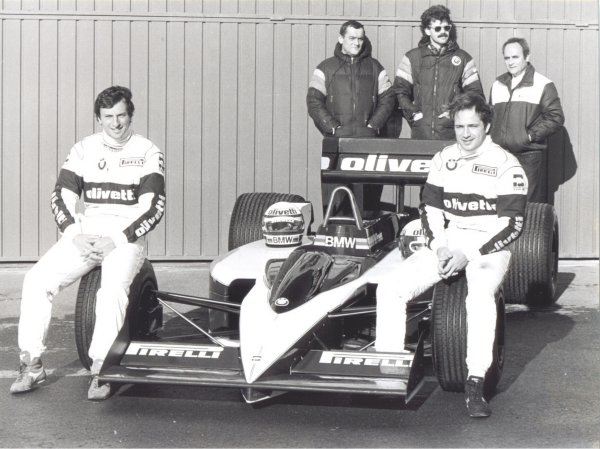 Elio's death did result in some positive moves by the FIA. Ultimately it was the beginning of the end of the turbo era and it pushed F1 teams to improve safety standards during test sessions. Had these improved standards been in place de Angelis probably wouldn't have died.

A rich kid from Rome who bought his way in to F1? A classically trained pianist who didn't have the killer instinct of a Senna? Elio de Angelis was almost certainly the last gentleman to drive in F1 and his talent behind the wheel should have garnered more than two meager wins but, as we all know, talent alone doesn't always get you in to the best cars in F1.

I'd thought I'd complement that bril article with a self-penned performance by Elio, recorded for a TV show during the 1985 German GP week-end:

Staff Member
Premium Contributor
At an Autosport show several years ago, I got to sit in on a Q and A session with Clive Chapman (Colin's son) and I asked him what his favorite memory was. He told me that it was watching his fathers delight at seeing Elio win in Austria. That it had been on the back of long period of struggles for the team (and the car company) and Colin wasn't expecting Elio to win here. It was of course the final win that Colin Chapman would see before he passed away that December.

What Clive also said was that because he wasn't expecting the win, Colin wasn't wearing the cloth sailors cap that he wore and threw in the air many times throughout his time on the pit wall, meaning that he looked a little lost and just threw his arms into the air. I have to say, looking at the picture of the finish seems to throw a little confusion on that story as it appears that Colin's cap is in the picture and heading skyward. I have zoomed in and it really does look like the cap. Having said that, I have tried to find other footage / pictures of Colin either wearing the hat or throwing into the air and so far have drawn a blank.

Maybe what Clive meant is that Colin wasn't wearing the hat at the time and had to run around to find it but I'm sure in the story he told he said his father didn't have his hat with him on that day.

Contributor
His death highlighted how deficient track safety/rescue arrangements were at that time. Several drivers of that era survived the crash of their cars only to perish of smoke inhalation because it took so long for the fire and rescue people to arrive on the scene. Siffert died of that cause in his BRM for that very reason, partly because none of the trackside fire extinguishers worked! How appalling is that?!

Fortunately, such things have been decisively addressed in the modern era, making such tragic deaths a near-impossibility.
Last edited: 10 March 2015

Valued Member
It's doubly tragic that the lessons which should have been thoroughly learned (at least) in Zandvoort in 1973 were only finally learned at De Angelis' death in 1986.

Brabham scarcely lasted longer than that, I wonder if it affected Ecclestone more than he'd like to admit. He certainly backed Dr. Sid 100%.

Contributor
Monaco 1967 should have given them a clue, but they were tragically slow learners.

Valued Member
I wasn't aware of the details of the Bandini incident to the same level as the Williamson one.

The most tragic thing about those three is how preventable all of them were - they're not talking about a dodgy weather call as at Suzuka, we're talking about not putting a ****ing fire out.

Premium Contributor
But how was anyone to know that damage to a car might result in the spillage of a volatile substance onto hot metal?

One of the arguments that my namesake gave against seatbelts was that they could keep you alive and concious in a burning car in an accident; and that was in the early 1960s.

Valued Member
Here's a novelty, Elio in a Ferrari.

It was the 30th anniversary of Elio' s death last week.

The years have not diminished the indignation caused by the way a human life could have been tossed away in such a scandalous manner, as this excellent article makes a good point of reminding us:

Valued Member
The one thing you can be sure of today is that there will be adequate medical provision wherever an F1 car runs.

Nice to contrast the response of the FIA then (cut the corner although it was not a contributing factor) with the Bianchi response (VSC to ensure a safe speed at such times).

Supporter
Incubus - That article mentioned a pitlane incident at France 86 that I didn't recall so I had to take a look. Utterly incredible. Even the French TV director knew the marshaling performance was an unmitigated disaster and did his best not to show it again after cutting away for the final time.

I only have this crappy French version of the race for now though. It started under questionable circumstances as well too. Alboreto stalled and was waving his hands for about 10 seconds but they started it anyway.