Drivers lap pace relative to each other?

This is something I've been considering making a thread about for a while. I've been quite frustrated over the last 2 years by the fact that people seemed to think Sebastian Vettel was pulling half a second gaps to drivers like Lewis and Fernando Alonso purely on skill. Two years of pole domination can not be ignored, but those gaps in my personal opinion are not possible between such gifted drivers without a supremely superior car because those drivers are so close to perfect, that simply finding half a second over them would nearly defy the laws of physics. Instead, what I feel is impressive in quali is when it is tight as it has been this season and drivers find those finest of margins in order to get pole, as we have already seen from Seb and Lewis this year. Grabbing a pole when the top few rows are within a few tenths of each other tells you how good their lap had to be, because when it is that tight there are no margins for error. If a driver has an advantage, they will have to use every hundredth of it to secure pole position.

That leads me on to the question of where does everyone see each driver relative to each other? I want to discuss this in the hope that people will see how close these drivers are to each other when you really think about it. Ant mentioned in free practice today that he thinks that the whole grid will be spread across 7-8 tenths - similar to what I was already thinking - so that even Hispania's times can't be explained purely for drivers (although I would say that the margins would be greater if you put everyone in an Hispania, compared to a Red Bull).

So, where would everyone put the drivers to the nearest tenth of a second. To simplify this, I am thinking purely of 1 lap quali pace, and have ordered drivers from top end of that time to bottom. You may personally spread the drivers over a greater amount of time, but I'd be interested to see if we could apply the wisdom of crowds for this. Even in my head alone a had a great deal of debate on this subject; so, I am very interested to hear of others opinions.

Some of the newer drivers I had real difficulty placing. I've perhaps been quite harsh on Bruno Senna picking him out as the lowest midfielder, while I've placed JE Vergne higher than current evidence has shown, due to his hype prior to F1. I've placed Mark higher up than I would've this time last year, while I didn't have a clue really where to put young Charles Pic.

Contributor
I don't see why it's Hamilton-Vettel-Alonso. Surely If Hamilton is there then Button has to be there too. He was the last non-Seb driver to win a title, comfortably beat Lewis last year and has won a race this season. *braces for argument*

Anyway, this is all a moot point because Kimi is better than them all!

This is very difficult as a lot of subjectivity can creap in, however we could quatify this using past data by devising an algorythm that looks at each drivers quali results against team mates and then complete grading table created from the implications.
e.g Driver A beat Driver B and Driver B beat Driver C therefore Driver A is faster than Driver C etc etc. That would be inaccurate though because of loads of mitigating circumstances. We could do the same only using seasons where things were 'equal' between the teammates
Apart from that it has to be a combination of the quantifiable and personal judgement.

I wouldnt disagree with your grading although I think LH should be above FA (2007) and possibly above SV also, but I am not 100%.

I also agree that SV was not really naturally 0.5 quicker than MW last year but had a 'magic boost button' type advantage over 1 lap caused by a combination of the regulations, tyres, maybe even driver weight and possible team preference. But he is still clearly faster over 1 lap more consistently and naturally than MW

Contributor
To quote McLaren's Paddy Lowe, "A lot of the performance limit of a car is set by stability in the high-speed zones; if you can’t hang onto it, you will have to introduce understeer in that zone. But if you have a driver better able to deal with oversteer in those zones that induce it, then you will have a less-understeery car elsewhere and therefore more total grip over the lap. The great drivers over the years – Senna, Schumacher, Mansell – have all had that ability. Like for like compared to other drivers, they want more front end.”

So the drivers better able to handle oversteer will be faster over 1 lap. Vettel was so fast over 1 lap because he was able to induce oversteer pushing the car past it's limit of grip until the blown diffuser kicked in. Not everyone would be able to handle that moment of oversteer on corners. Without knowing the intrices of every drivers style I have no idea what the pecking order would be.

Even Kubica who I thought had great 1 lap pace isn't good with oversteer, which limits his potential 1 lap pace, "If I get oversteer on entry, I’m dead. My style of taking the speed in just doesn’t work if the back is loose. Obviously you can adapt as you feel the car, but some drivers are better suited to one thing, some to another.”
J


johnnoble1990 said:
To simplify this, I am thinking purely of 1 lap quali pace, and have ordered drivers from top end of that time to bottom.
Click to expand


I actually think that was one of the easier decision, as Lewis has on average out-qualified Jenson by 0.2 seconds in Q3 since Jenson joined Mclaren, but by no means am I saying my opinion is final. Some of those drivers were really difficult to estimate. Seb for example was very difficult, as I didn't know if he was ahead or behind Lewis and Nando because he has never had any genuinely good benchmarks other than Mark, whereas I put Lewis ahead of Nando based on their 2007 season together in which Lewis was a rookie, but matched Fernando over the season.

Valued Member
If I were to have a guess (and that is what it was), I would say in qualifying the "'10-'11 Top 5" line up like this:
But with Alonso, Vettel and Button the faster in races.

Contributor
Oops, missed that bit - sorry about that. I had a very long (36 hours I think) day yesterday and I'm not quite back to full concentration levels

I still stand by my view that Kimi is faster than the lot of them!

I have put the drivers I think are at the top end of the times first. So I have put Lewis ahead of Seb and Alonso, but by less than 0.1 of a second. I really think over time they'd be almost in seperable, although I did flirt with the idea of demoting Alonso to -0.1 because I think it is obvious his true advantage comes from his racing craft, whereas Lewis has long been seen as the most naturally quick driver on the grid.

Good idea for a thread

I think I would mainly agree with your list, now that you've raised the topic and I don't actually know.

Did Hamilton outqualify Alonso more times than the other way around in 2007 and has Raikkonen ever been outqualified?

Rosberg appears to have the 1 lap pace only when there is no pressure on him.


And Boyle I think we ca safely say that Hamilton has more 1 lap pace than button after succesfully outqualifying him in 2010 and 2011 and having a 4 - 0 record over him this year.

downforce said:
Did Hamilton outqualify Alonso more times than the other way around in 2007 and has Raikkonen ever been outqualified?
Click to expand 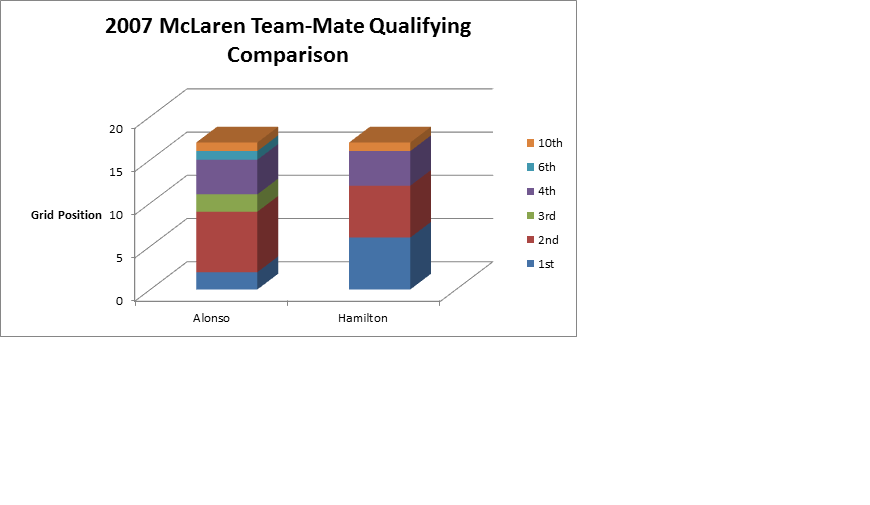 Remember that in 2007 there was refuelling which means both drivers could have had different fuel loads. However these results indicate (they do not take into account penalties) that there is a clear qualifying performance difference between Alonso and Hamilton, with Hamilton being the victor.

Valued Member
I've calculated average team mate differentials in qualifying back to 1950, but they're all in percentage form rather than seconds.

Galahad said:
I've calculated average team mate differentials in qualifying back to 1950, but they're all in percentage form rather than seconds.

Nice work, Galahad - thanks for that.

Contributor
I have absolutely know idea how to quantify pace in any realistic mathematical way, I feel that people will answer this question purely on the belief of their own view point, with no evidence to back. it up much the same as they do in every other thread that asks the question, "who's the best driver"

Valued Member
I'll have to try to put them into a readable format. There are no easy answers in the data, and some surprises.

Valued Member
OK, space and risk of hijacking thread prevents me from doing everyone, so here are John's top three. If there are specific requests for others I'll see what I can do - I suspect these will be enough to be getting on with, anyway.

It is sooooooooo difficult to know what to say even with great data like that Galahad. Firstly, Alonso has out-qualified every team mate he has had, some by a significant margin, but with the exception of Hamilton (who was in his rookie year). Does 2007 outweigh all prior evidence of Alonso's amazing 1 lap speed. Vettel's data only goes to confirm how difficult it is to know how fast he is as all his data is only really relevant when he's been against Mark, which was very close in 2010, and then a much, much wider gap in 2011.

I think one thing is clear is that the car makes a difference not just in its speed relative to other cars, but also in how much it suits a driver in that particular year. Webber has bettered Vettel 3-1 this year, while couldn't get near to him in 2011 car. Thanks for the data Galahad.
J

That table no-FIAt-please posted must show one of the greatest quali season a driver has ever had? It is difficult to read, but does it show Lewis qualifying in the top 2 11 times (6 poles) in his rookie season where his teammate was Fernando Alonso, whilst also competing against 2 Ferrari's that were pretty equal on pace.

I'm always stunned when I look back on that season. It is one of those things that is even better than you remember. Totally going to try catch the 2007 season review when I get a chance.

Contributor
no-FIAt-please How many fastest qualifying laps do you have for Alonso and Hamilton? I make it 5 for Hamilton (Canada, USA, GB, Japan and China) and 3 for Alonso (Monaco, Hungary and Italy). The graph does not look like that.