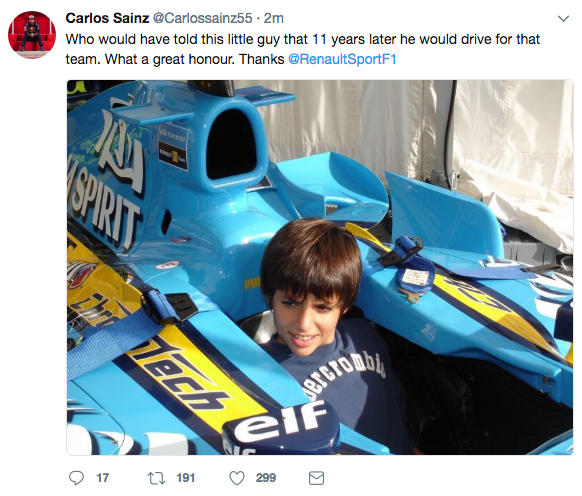 Valued Member
Sainz has now scored more points this season than Toro Rosso. That was quick!

Its a multi year deal so 2 years plus an option to extend essentially. I think Carlos might thrive now given this new lease of life

Its a multi year deal so 2 years plus an option to extend essentially. I think Carlos might thrive now given this new lease of life
Click to expand

Good luck to Sainz, I hope it's a great move for him. It could be the making of him.

As for Button, 4 teams in 4 years, wasn't there a time when he was signed with two teams at once? I recall something about him being signed to drive for Williams and then changing his mind and opting to move elsewhere or something like that, but alas I can't recall the details. I am sure someone else will though.

Contributor
Jean Alesi signed for 3 teams in one season

Contributor
And Sauber tried to get all the drivers on the grid contracted to themselves but finished up with only four driver for two cars.

Button because he was apparently owed bonus payments by BAR in 2004 for his performances. We are led to believe he was advised by his management to re-sign for Williams.

I was surprised given they had a poor season with Montoya wanting more money being paid 3 times less than R Schumacher and feeling that Williams deprived him of the championship challenge the previous year. So he signed for Mclaren for 2005 before 2004 season started, then Ralf after the 1st race was disputing over his contract demanding a further raise from his $12.5m to $17.5m a year. Also the walrus nose Williams was a poor car

Button got himself in a mess with BAR fighting for his services in 2005 which he was obliged to drive for and sacking his management . In 2005 having seen how bad Williams were he had to pay £18m to get out of the signed contract

Contributor
Thanks for clearing that up II_leone