Valued Member
We seem to be missing a thread on the upcoming Berlin e-Prix so I thought I'd start one. The course is 2.469km long (do we really need 3 places of decimals) and will last for 33 laps, starting at 4pm CET. It is on the site of the old Templehof Airport in Berlin and has 17 corners so is far more twisty than some of the previous races, given the "destruction derby" nature of some of the e-Prix's I wonder how many will many to get to the end.

Sebastien Buemi became the first driver to win two races in the series at Monaco but is still only third in the drivers table behind Lucas di Grassi and Nelson Piquet jnr. For those that don't know, drivers have to drop one race result at the end of the season but with all of the top three having managed at least one DNF this is unlikely to make a huge amount of difference to the final result.

I'm sure Nick Heidfeld will be wanting to perform well at his home race but after his positive showing in the first e-Prix in China he hasn't really troubled the front runners. The things I'm most looking forward to is seeing who Bruno Senna will hit this race and will Scott Speed and the Nicki Shields finally stop flirting go out on a date.

Enough of my nonsense. Hopefully we can looked forward to some more close racing and some very brave and daft overtaking maneuvers, lots of locking wheels and cars drifting through corners. You don't need 1,000 bhp and ear drum bursting exhausts to make a motor race Bernie, watch and learn.
Last edited: 18 May 2015

Well if its a good race on that twisty track F1 has to give itself a slap. But I'm expecting more crashes and less overtaking.
Interesting to see how such a twisty track compairs with the F1 at Monaco on the same weekend. The Formula E certainly made Monaco look like a decent track a few weeks ago. Apart from 'the crash' but don't mention that. Shss.

Here are the local times. Berlin is 1 hour ahead of the UK, so Race will be at 3pm UK time. 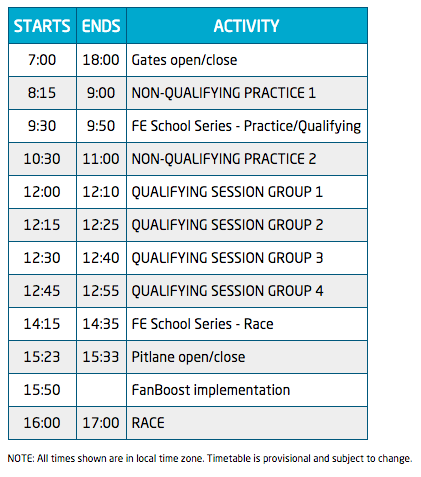 Valued Member
Trulli on pole, Trulli goes backwards. Haven't we seen this somewhere before? Well done Lucas di Grassi, stonking win. Never seen the tyres on these cars look so wasted after a race, the concrete at the airport must have been really abrasive. What a shame Nelson Piquet made up so many places, ever time he passed another car I was booing.

Valued Member
I tell you what, all those fans in Berlin prove that Ecclestone was spot on* when he said Germany was a crap market for motorsport.

Valued Member
Oh dear, even worse NPj now leads the Championship. The wing mods may well explain how Lucas was able to pull away so fast from the rest of the field.

Contributor
Exactly what I thought FB as soon as I heard the news.

It does mean a win for D'ambrosio and Dragon who have been quietly quietly catchy monkey getting nearer the front.

I thought the track was really good. Genuinely enjoying the Formula E more than the F1 at the moment.
Last edited: 25 May 2015

Contributor
Can I also add what a great job ITV4 did with the build up coverage for this race. Some great items - including a demonstration of tyre degradation for beginners. Gone was the oddly moving face of Jennie Gow but the stand in guy was pretty good.

The international feed still needs some work but then its always going to be brought down in quality with Nikki Shields asking the questions.