Martin Brundle, for many years, didn't attend the Hungarian Grand Prix. Why was this I hear you ask, and even if you didn't I'm going to tell you!

Hungary was, for many years, a Communist state aligned with the Warsaw Pact and staunch supporter of the Soviet Union. In 1956 the people of Hungary got a bit naffed off with making shoes in one factory and then sending them next door for them to be taken apart, or spending a week digging ditches, and then spending the next week filling them in again, but hey the Polit Bureau had targets to meet. Anyway, I digress in to the detail of the pointlessness of Communist, centralised dictat and it's affect on the proletariat, back to 1956.

Students marched through Budapest to object to Communist rule. They started in Buda and finished in Pest, although it might have been the other way round. Now the Russians weren't all that well disposed to the Hungarians anyway as they sided with the Germans in WW2 and helped in the invasion of the Motherland. And they really took umbridge at this bunch of upstarts objecting to having a dictator imposed on them from Moscow, so between the Russians and Hungarian Communists it was decided that these student should be made to be quiet.

Rather than pop outside their offices and ask the students politely if they would mind buggering off home as it was a bit noisy and no one else seemed to really care, and even if they did they knew better as they would be whisked off to a gulag and have electrodes attached to their testicles, the powers that be decided to go all Tiananmen Square on the protesters before the Chinese had even thought of it. There's nothing new under the sun I tells ya!

The tanks went in and battles between the Soviet forces and Hungarian militia raged. This, presumably, was seen as a reasonable alternative to sitting down with the protesters, discussing their issues and seeing how the lives of ordinary people could be improved to the point where they didn't want to grab a gun and shoot all and any members of the Communist Party.

I'm sure you are wondering what all this has to do with Martin Brundle. Well back then he wasn't good old, grid walking Martin Brundle of which ever TV channel had just parted with a Kings ransom to show the meagre fare that is modern Formula One. Oh no, back then he was Martinov Brundelski, ice cream maker and frozen dessert entrepreneur. During the uprising, which was over the summer , Martinov sensed an opportunity to make a dime, or rouble, or whatever currency the Hungarian were using.

He packed up his Ice Cream van with his latest creations; acorn surprise, crab apple sorbet, plantain and pampas grass lollies, and the ever popular cows udders delight, and headed off to the big city to make his fortune. When he arrived it was a bit trickier than he had anticipated as he had to weave between T34 tanks, armoured personnel carriers and various howitzers, all the time with "Do you wanna be my lover" tinkling out from the vans bells to call the hot, hungry and thirsty revolutionaries to partake of his wares.

His ability to dart between tanks, avoid howitzer shells and still get two scoops of potato mash ice cream in to a cone for a burly fighter did not go unnoticed. Lurking in the dark recesses of the Polit Bureau offices was Bernardoff Ecclestonev, at that time just in the early stages of his meglomania, and he spotted that whoever this young man was he had a future as a racing driver.

Ecclestonev tracked the young Brundelski down and smuggled him over to Kings Lynn. There Martinov Brundelski changed his name to Martin Brundle, and to make his integration in to the local Community more legitimate brought his sister with him and married her shortly after arrival.

Since that day Martin Brundle, or Martinov Brundelski, has been unable to travel to Hungary for fear of having his nads liberated from the rest of his body by any of those who purchased some of his frozen desserts during the long, hot summer of 1956.

Some aspect of this story may have been fabricated for comic effect. This is not meant, in any way, to trivialise the death and suffering of those who lost their lives during the Hungarian uprising.
Last edited: 22 July 2021
Click to expand

im really looking forward to this race. lets get battle resumed. i can already tell that globally there hasnt been a buzz about F1 for a long time 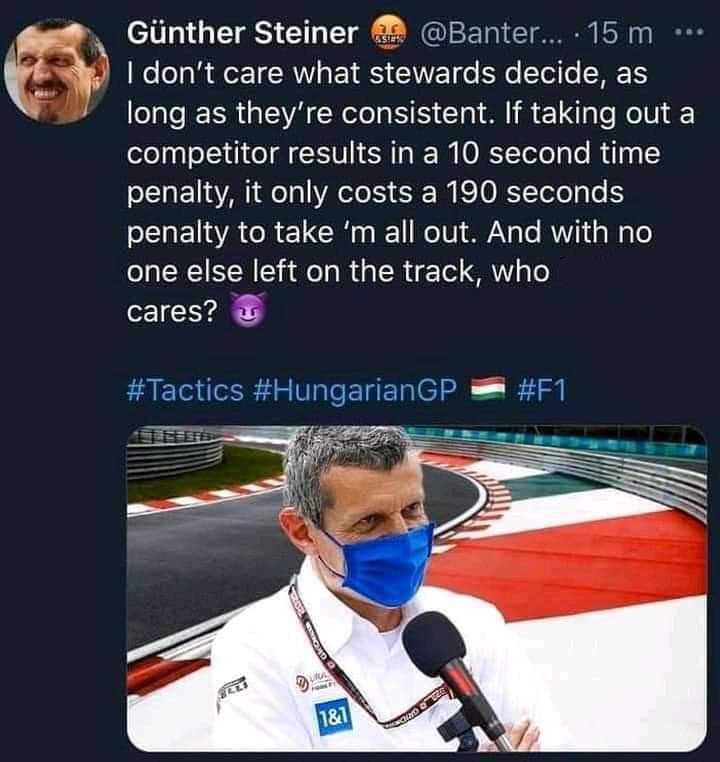 (apologies about early, i didnt notice the bad word)

The talking point before the race started and probably when it finishes wont be the race itself but tomorrow's hearing so Red Bull need to.present a compelling case of new evidence. Has anyone got any Youtube videos then taken down or they think the GPS data will prove Hamilton was way too fast for the corner . Again absurd given he picked up a tow as well

Staff Member
Premium Contributor
The simple solution is to ban overtaking and have cars follow each other around for the duration of the race.

Is Jackie Stewart going to give evidence for red bull that that is the way it must be for "safety" reasons?

Contributor
In football terms,Mercedes F1 have gone in two footed on Red Bull in this statement. 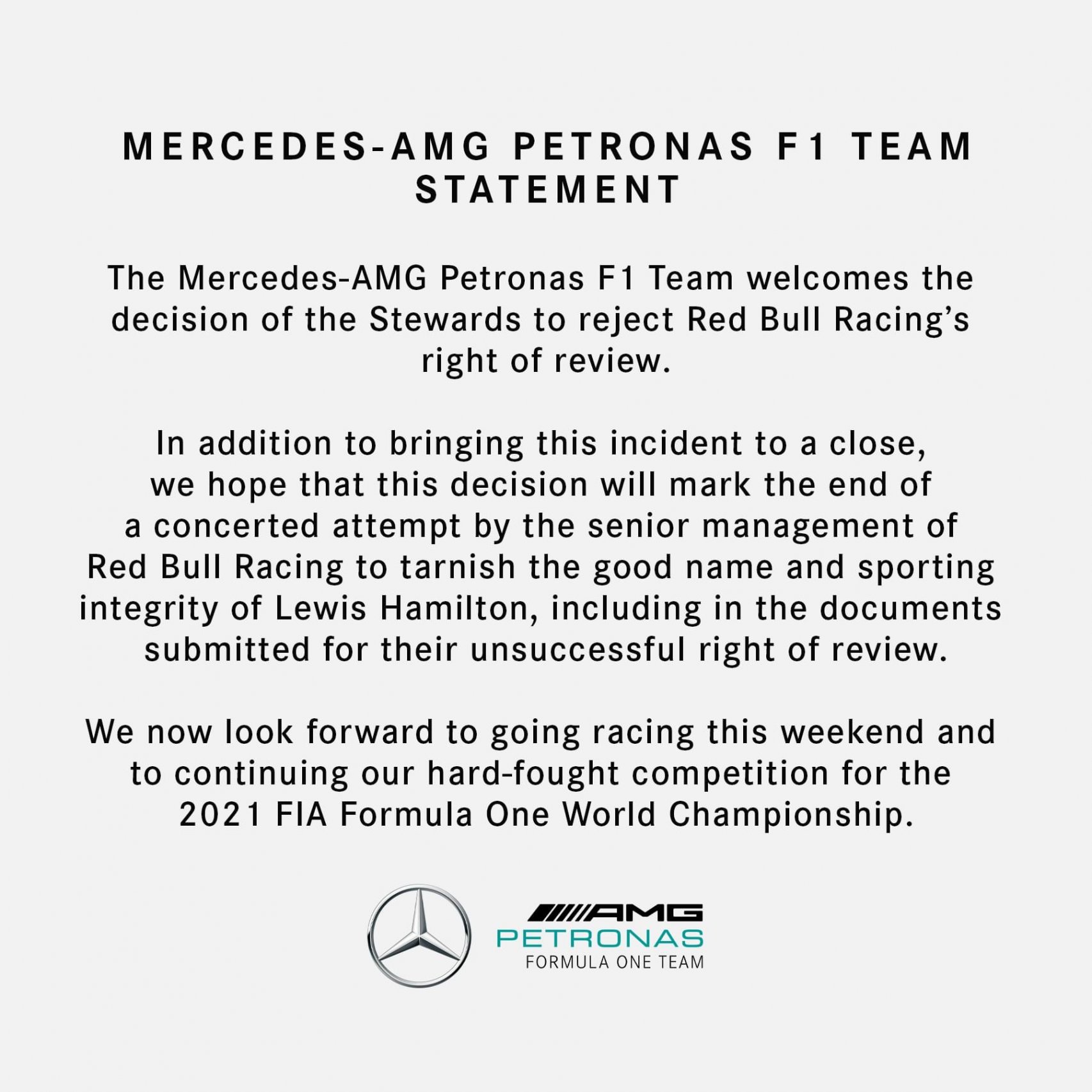 Johnny Carwash said:
In football terms,Mercedes F1 have gone in two footed on Red Bull in this statement.
View attachment 14734
Click to expand

thats is fantastic from mercedes. must say im loving as i always say we in the midst of a classic season. if this keeps up there going to have to stick them on opposite sides of the pitlane by Abu Dhabi

Valued Member
What a shame they didn't pair Hamilton and Verstappen at the drivers press conference.

Just on that, Vettel tried to help Alonso celebrate his birthday at their press conference and it went a bit Pete Tong.

FB said:
Just on that, Vettel tried to help Alonso celebrate his birthday at their press conference and it went a bit Pete Tong.
Click to expand

According to Ralf Schumacher, Stroll Snr sabotaged it because Stroll jnr had made Alonso a very nice birthday cupcake and didn't want Seb stealing his thunder.

There's a lot of internal strife at Aston Martin don't you know. 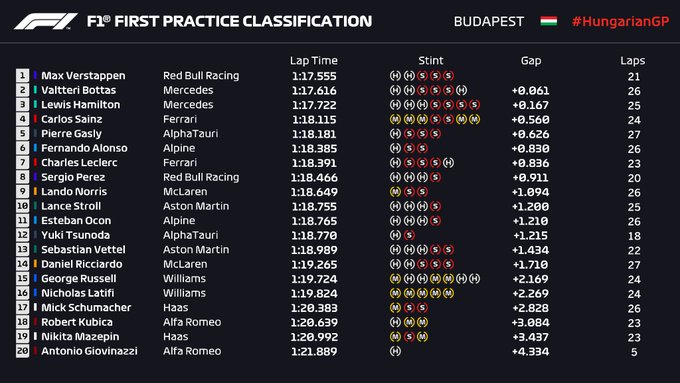 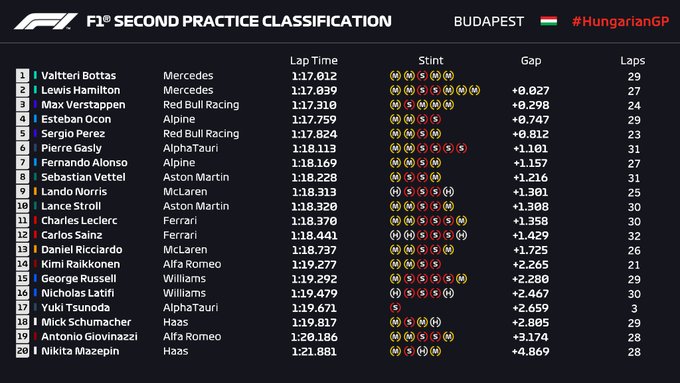 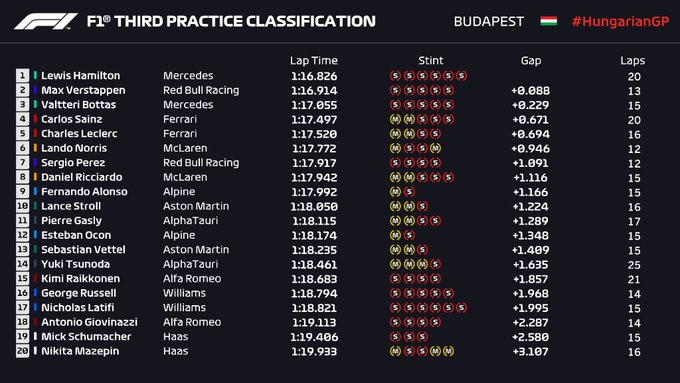 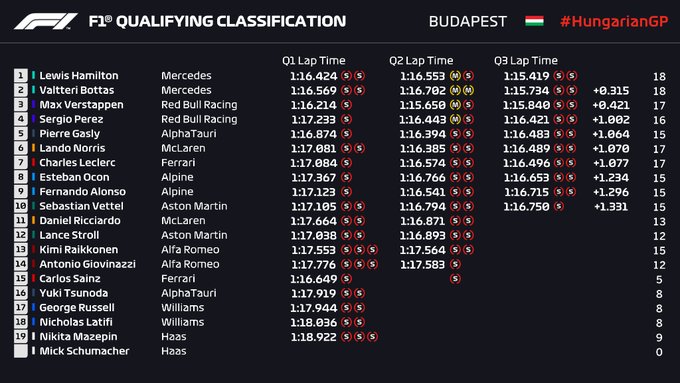 Staff Member
Looks like the RB drivers delayed going out so they could benefit from a tow from Hamilton.

Then of course they whine like little bitches because it didn't work and Perez didn't cross line before the time expired.

In case you weren't aware Red Bull, you can go out and do a qualifying lap ANY ****ING TIME YOU LIKE instead of waiting for someone to go out first!

Contributor
Reminds me of that time vettel slammed into hamilton deliberately. It fired Hamilton up. I think this whole Red Bull assholery has fired up Hamilton and the Mercedes team. It's over for Red Bull now. I predict a Mercedes 1-2 plus fastest lap.
Last edited: 31 July 2021