In an age where we talk of Tilkedrome's and debate which one of the three potential layouts of Bahrain will result in the least boring race, we should be grateful that we still have the outstanding Spa-Francorchamps circuit. Much like "The Ring" it remains a cut down version of its former glory however, what a glory it still is.

In the 60's Jim Clark won here 4 years in a row and taking a look at the list of past winners reveals multiple Spa victories by the cream of F1's world champions.

The old circuit as used in F1 from 1950 until the early 70's was 8.76 miles long and contained 21 turns. One turn, the Masta Kink, was once described by Jackie Stewart as the most difficult corner in the world. It was here in 1966 that Stewart's BRM left the track and ended up upside down in the cellar of the farmhouse on the outside of the corner. Footage of this race was used in John Frankenheimer's F1 film "Grand Prix".

One of the most astonishing performances by a driver in an F1 race occured here in 1963 by Jim Clark. Starting from 8th on the grid he roared away from the line and immediately took the lead which he proceeded to hold for the entire race. As the race progressed the conditions became more and more difficult with the last laps taking place in torential rain. Clark however, had lapped the entire field with the exception of second placed Bruce McLaren who Clark lead home by almost 5 minutes.


Due to a number of incidents and growing safety concerns the track remained off the calender until the mid 80's when it returned in a stripped down form in the layout we know today. There have been a number of minor changes since then but the layout remains more or less the same. Today the most famous corner has to be Eau Rouge and although F1 cars now take this flat out due to the ever increasing levels of grip this has only been the case recently, prior to this it's provided some memorable moments.

One of the most well known was the bet between Zonta and Villeneuve in 1999 about which of the two of them could take Eau Rouge flat out. Resulting in both of them crashing in qualification:


Given that Spa rewards brave drivers who can maximise the performance of their cars, there really can only be one winner here this weekend and that will be Lewis Hamilton. The midfield battle should be as engaging as ever with a number of drivers looking at the top end of the points. If it rains then it could be game on for any number of drivers.

Either way, Spa often provides some of the best races of the season. Lets hope it's that way again.
Click to expand

cider_and_toast said:
there really can only be one winner here this weekend and that will be Lewis Hamilton.
Click to expand

sunday will be another 1st, because sunday will be the 1st Scheduled GP in 2020. also ive been looking on my weather app. & it says that their is a 92% chance of rain come race day. so im looking forward to the hottest Belgian GP on record
Last edited: 27 August 2020 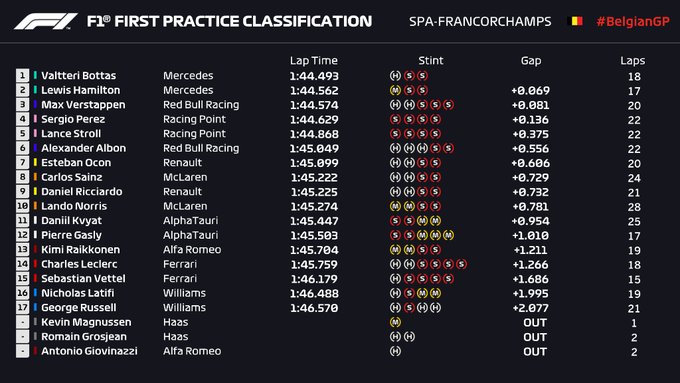 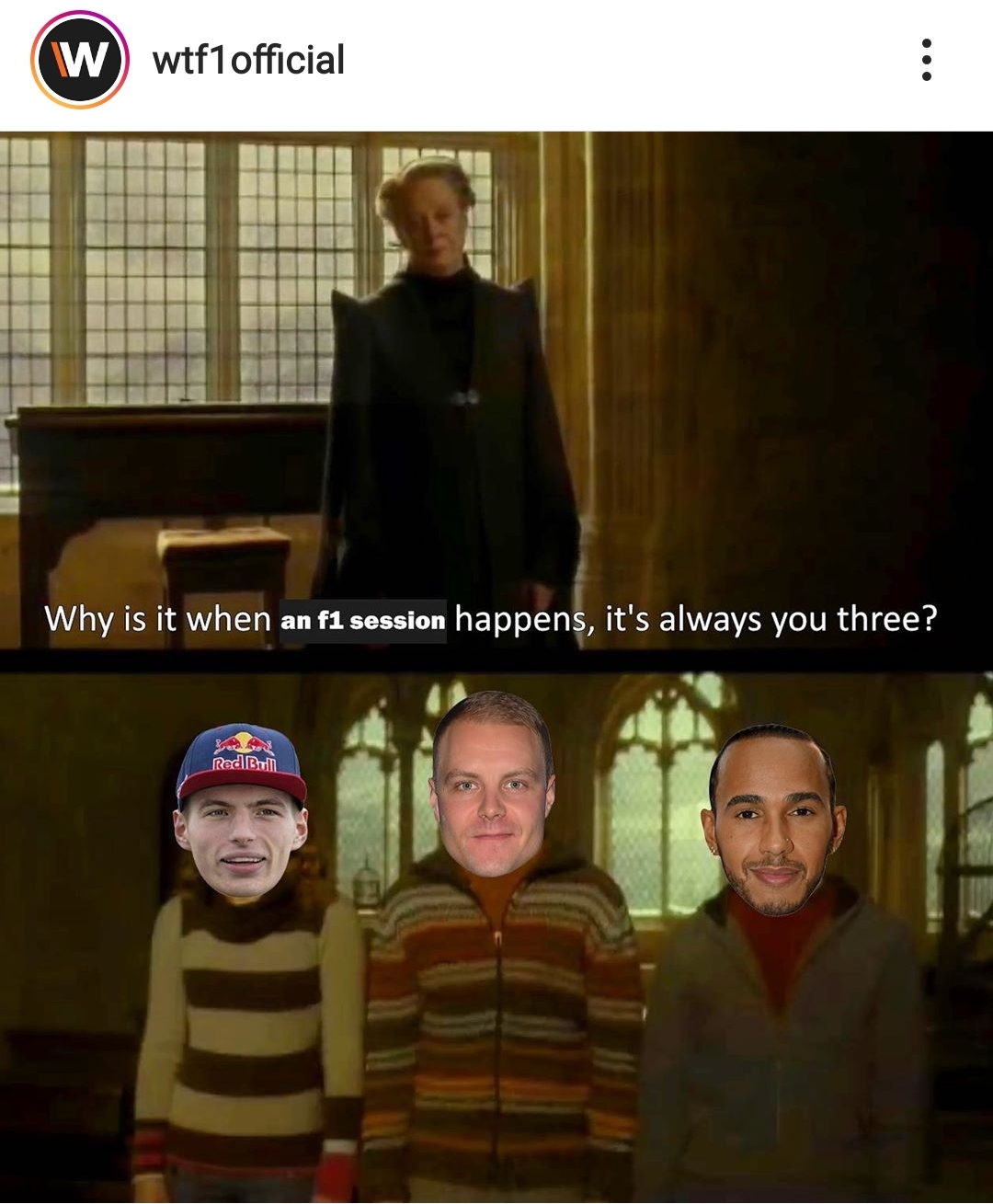 very odd engine issue for ricciardo, going through eau rouge it sound great completely normal. then it gave out. very much fine fine fine. not fine. appartantly it was loss of hydrualtic pressure 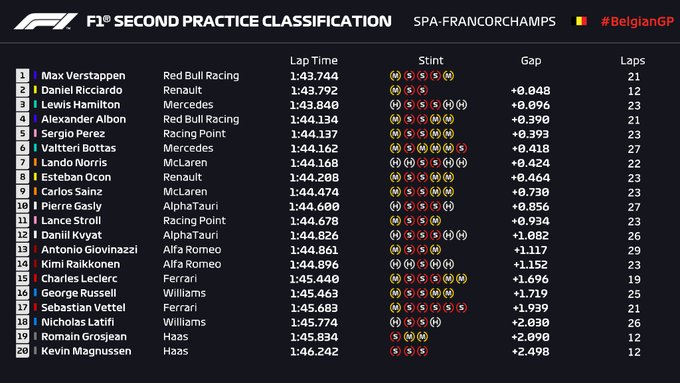 George is faster than you Seb

Contributor
This time last year Ferrari were 1-2 in every session. Ah well it’s good to see them so far down on the time sheet anyway.

Staff Member
Valued Member
Ah ha, I see it's the classic "look we really are all competitive" Friday practice show to grab the headlines on Saturday.

And then Qualification starts and once again Merc are 1 second quicker than everyone else.

That Ferrari really is a turd though.

Contributor
6 of the bottom 8 cars are the ones which are Ferrari powered.

Dartman said:
George is faster than you Seb

Contributor
I laugh at everything she says.

So would I be right in thinking that the rule change regarding engine modes to slow Mercedes down hasn't, and has in fact hurt Ferrari most?

not yet sobriety it been delayed until monza so engine modes are still legal for this weekend. incredible stat that in that 15 yrs of knockout qualifying ferrari have never had both cars knocked out in a dry session

i hope we dont see the traffic again of people wanting slipstreams. because besides monza which surely nobodys forgotten but if they had Watched F3 on friday. they'd know its more a hindrance than that help. because zendelli went out 1st had no slipstream but clear road & put it on pole & won the race 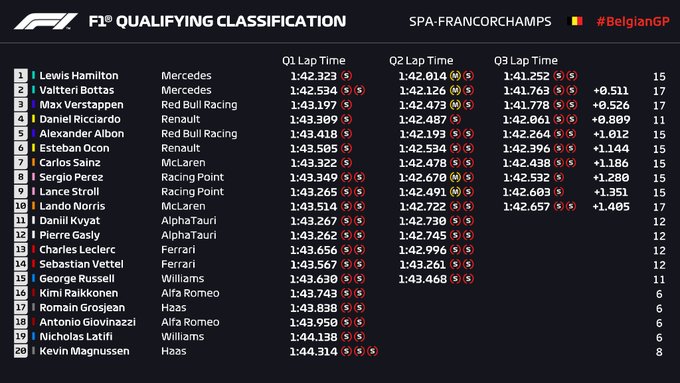 looking at the forecast & the radar. fully dry race upcoming

Valued Member
Sainz out before the race even starts.