If you say the word Spa to most women, the vast majority would probably think of a luxury place where they can get a massage, facial, manicure and pedicure or any number of other beauty treatments. Not me though, for me if you say the word Spa my eyes light up and I think of probably the best race track on the current F1 calendar. This is a track where over the years we've had a lot of exciting races full of thrills a spills. A track which if you ask the drivers to name their favourite circuits, it will most likely be in the top three they come up with. A drivers track, a track with history and a classic that seems to mean more when you finish first. Congratulations you’ve just won Spa!!

Spa has always been a challenge but even in the years I’ve been watching F1 it’s been sanitised to some degree. The Bus Stop when you almost used to stop and indicate to turn off onto a small side road before rejoining the track was always something I enjoyed, that is long since gone. Thankfully Eau Rogue is still something of a challenge but even that is not what it used to be. Most drivers will tell you that it’s still a hell of a corner but often these days they take it flat. Yet think back a few years and most people would look at you like you needed your head testing is you even suggested such a thing.

In 1998 Jacques Villeneuve tried taking Eau Rouge flat and crashed his Williams Mecachrome spectacularly, nothing that remarkable there, a lot of people have done so over the years. It was a pretty heavy crash but he was quickly out of the car and back to the pits again. Did he learn from it though? Did he hell?

Fast forward to 1999 and Jacques is with BAR, his team mate is a young Ricardo Zonta and the two drivers got talking. Apparently they came up with a bet or dare, call it what you will and the fans who watched qualifying that year were in for a sight they wouldn’t forget, I was one of them. As a Jacques Villneueve fan I was on the edge of my seat as he set off, I recalled all too clearly what had happened the year before.

Apparently Villeneuve dared Zonta to take Eau Rouge flat. As I say, these days it seems unremarkable, back then it almost seemed like a death wish. Villeneuve went out first and attempted to take the corner flat, just as he’d said. Much as in 1998 he tried and failed. His crash was worse than 1998, he was heard to comment afterwards ‘at least I rolled it’. His younger and much less experienced team mate then went out. Even after seeing what had happened to Villeneuve, Zonta stuck to his word and he too attempted to take the corner flat, his crash was even worse than Villeneuve’s. I do recall the look of total disbelief on Craig Pollock’s face at what his two drivers had done to his teams' cars. Both drivers thankfully walked away from their wrecked cars and a lesson was learnt, no, you couldn’t take Eau Rouge flat at that time, but it hadn’t stop them trying. You have to wonder why they tried it in the first place, bravado? Stupidity? That need to be on 'the edge' as Jacques himself used to say? The thrill of pushing man and car to the limit? It could be any or a combination of all of these things, I just remember it was both exciting and yet horrifying to watch them try it at the time.

Spa is also subject to the weather effect, catch your pitstop just right as it begins to rain and you’re a hero, miss that pit entry just as the heavens open and the likelihood is your race is ruined, mostly just due to the length of the track as it's the longest on the current calendar. By the time you've tiptoed all that way back around to the pits again, it's probably too late to save your race. That is part of the joy and agony of the Spa-Francorchamps circuit and what makes it still one of the races in the season that I, and most likely a lot of you, most look forward to, probably a lot of the drivers do too. It always offers up the chance of a brilliant race and thankfully it still sometimes produces one too.

Last year your pole sitter was Hamilton and the podium was as follows. 1st Vettel, 2nd Hamilton, 3rd Verstappen.
Who will be there this year? Would anyone bet against a Mercedes winning the race? Earlier in the season I'd have said no, but with Max Verstappen driving his socks off in a resurgent Red Bull, plus hopefully a threat from either of the Ferrari drivers, it's far from a foregone conclusion. That is just how we like it

Edited to add the banner, we used to have a banner at gp.com for each race, I thought I'd add one of them to this thread and then I forgot to do it, until now

Contributor
What a track for Albon to do his first race as a Red Bull driver. Good luck to him.
J

Angel said:
What a track for Albon to do his first race as a Red Bull driver. Good luck to him.
Click to expand

Amazing opportunity for Albon. I hope he does well and this opportunity works out for him. Disappointed for Gasly but maybe it was simply too much, too soon.

Contributor
Norris has always been a bit of a specialist round Spa at junior level so will be worth keeping an eye on. Lando needs to step it up and start beating Sainz now.

Contributor
As always the weather is likely to play a part here. It's certainly a racers track and I am looking forward to this race a lot mroe than many others. I hope it doesn't disappoint!

Well if its dry then Ferrari have a chance with the long straight after Eau Rouge. If it rains and judging by Germany where their cars were poor in the wet then they might be in trouble 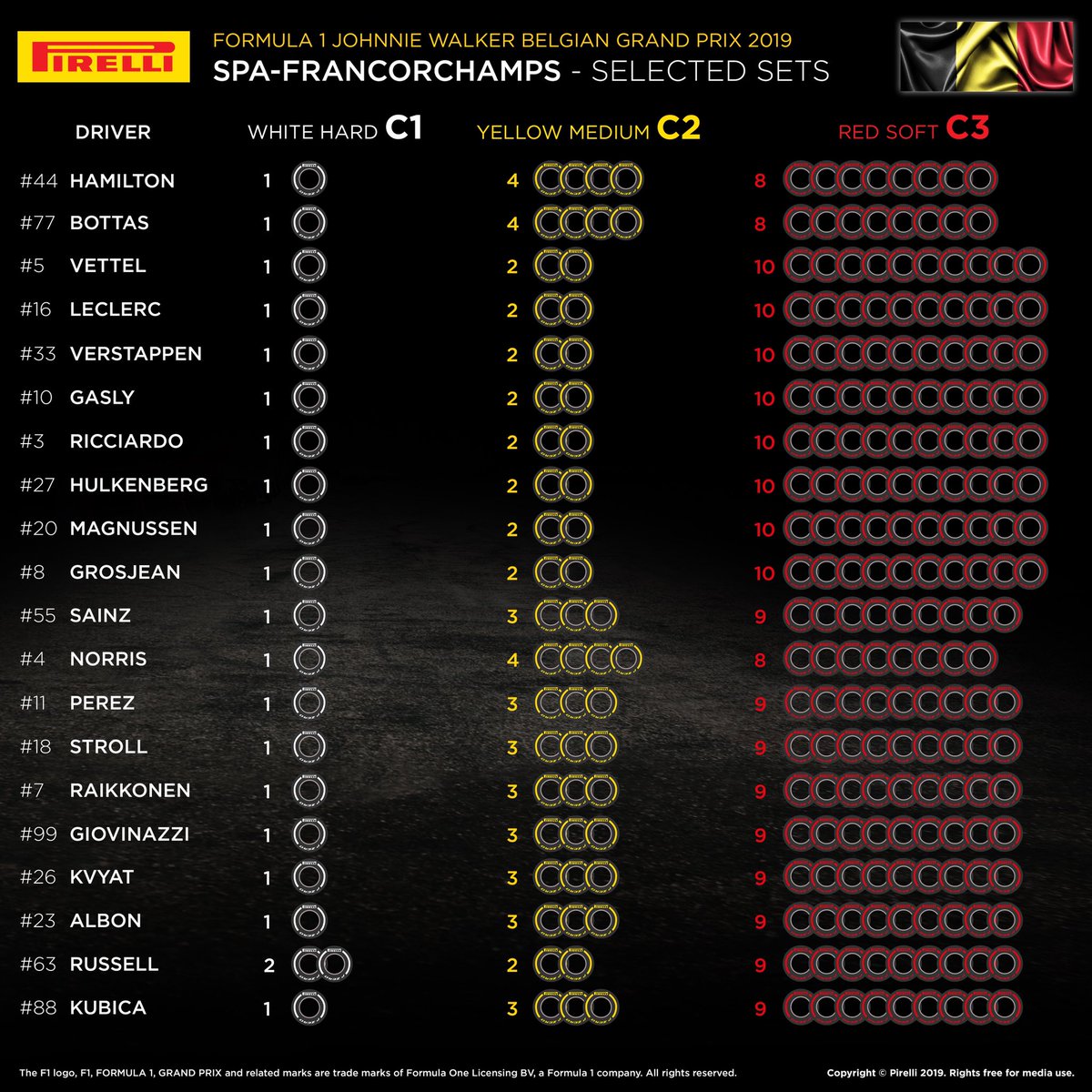 Contributor
Poor hard tyres, no one loves them much, except Russell.

Contributor
Maybe we will see some wild, desperate strategy from Williams then Angel.

P.S. My tomatoes are in full flow and have more taste from any supermarket ones. The only problem is that there are too many of them and are tending to outweigh the strength of the branches.

Contributor
Maybe young George knows something the rest of them don't

Taunting me with your tomatoes eh? Well done you on getting them to grow that well. I imagine with the weather we've been having lately they've been watered pretty well which will have helped them this year compared to last year. I hope you and Mrs Boddy and probably your friends and family enjoy them if you have that many. I'm not jealous at all

well its been a theme few times this yr that many teams get surprised over the weekend. when the hard tyre is best one to use. but they have 1 set & then are into unknown of stint length.

Angel said:
What a track for Albon to do his first race as a Red Bull driver. Good luck to him.
Click to expand

Now, what happened the last time Red Bull parachuted a driver into the main team mid-season?

Contributor
Albon is the least experienced driver to drive for the Red Bull senior team since Christian Klein.

RasputinLives said:
Albon is the least experienced driver to drive for the Red Bull senior team since Christian Klein.
Click to expand

Liuzzi got treated quite badly throughout his career whether it was Toro Rosso, Red Bull and Force India

The Artist..... said:
Now, what happened the last time Red Bull parachuted a driver into the main team mid-season?
Click to expand

Max will get to see how it felt from the other side now won't he? Whether Albon will have as much impact as he did, who knows?