I shall start you off with these quotes from the qualifying press conference at the Australian GP:

LH - “I can assure you we don’t have a party mode. I used the same mode from Q2 to the end of Q3. There was no extra button or mode I engaged in.”
SV - “What were you doing before then?”
LH - “I was waiting to put a good lap in and wipe the smile off your face.”

It was a stunning lap from Lewis on Saturday, make no mistake, but someone needs to remind him that you don't win anything on Saturday. Vettel got lucky on Sunday with the timing of the VSC but then to win in F1 you always need a slice of luck. Pride can often preface a fall - ask Nigel Mansell in Canada in 1991.

So what have we learned in the first race of 2018? Mercedes have a very obvious qualifying advantage over all the other cars. This is a combination of the settings available to the works team and the quality of one of their drivers. Ferrari are a little behind Mercedes, sorry Lewis Hamilton, on race pace and Red Bull a little behind them. Haas have built a good car and despite everyone stating that it would be good to see another team mixing it at the front there is lots of moaning when a team takes a step foward.

Team Alonso have made some progress and, bless, Fernando would like his race engineer to be a bit more positive in his radio messages. His "safe space" has been set aside at the back of the pit garage should he get a bit stressed. Stoffel Vandoorne was also allowed to use one of the orange cars as long as he didn't take any publicity away from Fernando. Renault appear to have moved ahead of Force India and there were three other teams taking part but no one noticed. That said, Hartley did bring the Honda powered Toro Rosso home albeit a lap down even after the safety car.

So what to expect in Bahrain? Valtteri Bottas took pole last year but I suspect he has been reminded of his position in the team this year and to behave himself in Qualie. Vettel won last year, I was racking my brain as to why and then read an old report about Lewis playing silly buggers with Danny Ric in the pit lane and getting a 5 second penalty. Ah, yes.

I have visions of a 2010 type 2 x 2 procession as the cars chug round in the desert but who knows, we might have a freak thunderstorm half way through but, of course, this would result in the race being stopped as, as we all know, it's impossible to drive a car in the rain.

Hope I'm not bigging this up too much for you. We have a fight to see whether Hamilton or Vettel will win their 5th World Title this year, all the rest are also rans. Let's hope that there is some real racing to decide which of these two will match Fangio.
Last edited: 25 March 2018
Click to expand

Premium Contributor
They could design a pop up umbrella for the rainy moments. That would be entertaining.

Contributor
It's a shit race in a shit country.

Contributor
Looking forward to seeing the mythical none existent strat 14 engage by Merc. Oh and Williams and Force India who we are completely and totally reassured have the exact same software and engine modes.

You seem to have Strat 14 dialed in too, the way you're on about it.

Contributor
No I only go up to 11.

Why not just make 10 louder?

Contributor
But this goes up to 11. That's 1 louder.

Valued Member
Or go and work in a gentlemen's outfitters?

Are we going off topic? All the talk on Sky after Australia was that Bahrain would be better. Lots of muttering about long straights and overtaking areas. Difficult to get close to another car if it's got 100 bhp more than you though.

FB said:
Or go and work in a gentlemen's outfitters?
Click to expand

What are the hours?

Sky are telling us every race is going to be amazing though. I'm not sure I remember too many great Bahrain Grand Prix.

Staff Member
Premium Contributor
I remember one where Sato had a great drive for BAR. I want to say 04 but could be wrong.

On his day, Takuma was a pretty good driver.

Contributor
Really? His day must have fallen in the off season for most of his F1 career then.

Didn't Hamilton and Rosberg have a skirmish after a safety car round this place? Think it was the same year you could see flames from burning vehicles as the democratic protesters were beaten to a pulp and we weren't allowed to see a Force India on screen as some of their mechanics dared to suggest it wasn't safe outside the track.

Premium Contributor
Is there any camel racing? 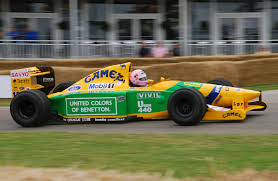 Yes but as you can see Ross Brawn has redesigned them

RasputinLives said:
Really? His day must have fallen in the off season for most of his F1 career then.
Click to expand

This must have made you smile?

Contributor
Yeah OK I admit it did. But it's Sato he probably qualified last next race with his team mate on pole or something.

Back to Bahrain. I think I will forever associate it with the super super hyped opening of the 2010 season. We have 5 world champions on the grid! Nearly all the teams can win! Schumacher is back! Alonso at Ferrari! Massa is back! Mercedes is back! Button vs Hamilton! Hype hype hype. Then cue one of the dullest races ever seen.

Staff Member
Premium Contributor
Was that the year they used the super long "endurance" layout?

So called because it was an endurance to watch?

I enjoyed the 2010 Grand Prix, it was the race in which a cylinder in Vettel's car broke whilst he was in the lead that handed the win to Alonso.

Edit: I can't really remember the race, but I remember watching FP1 or 2 and the wheel falling off of Chandhoks car... yeah you forgot them in your list of exciting happenings. Three new teams!... that were miles away from winning.
Last edited: 26 March 2018

Valued Member
Not sure what race you were watching in 2010 Rutherford but this was the BBC intro to the Australian GP in 2010. Even the BBC thought the Bahrain race was boring. Australia that year was a different matter though, amazing what a bit of rain can do to spice up an F1 race.