Malaysia was the second country in Asia to be awarded a Formula One race in 1999. The success of the race at Sepang was the cue for the expansion throughout Asia of Formula One, with varying levels of success.

2017 sees Malaysia say goodbye to Formula One as the owners of the Sepang circuit sensibly believe that their finances would be better served if Moto GP provided the sole blue riband event at their circuit. This is, of course, an indictment on Formula One more than those who are rightly looking out for their circuit's best interests.

Down the years, this circuit has seen many notable events. Its inaugral race saw Michael Schumacher's return from injury only to give the win up to team-mate and accidental title-challenger Eddie Irvine, with the Ferraris disqualified then reinstated in a move that conviniently restored a title decider at Suzuka. Schumacher was also at the vanguard of the Ferrari comeback from a poor stacked pit-stop in the wet in 2001, with he and Barrichello carving through the field with their Bridgestone intermediate tyres.

The decision to change the time of the Grand Prix to cater for a European audience fundamentally affected Sepang for a while. The new time was at monsoon o'clock in the tropics, meaning the 2009 Grand Prix was washed out half-way through. It meant a half-point victory for Jenson Button, ice-cream for Kimi Raikkonen and a "calm down, Felipe, baby" from Rob Smedley. 2012 was also wet, with the much-maligned Ferrari of Alonso holding off the challenge of Sergio Perez' Sauber when the Mexican lost time slipping off-line.

The story of the 2010s in Malaysia has been about the dominance of one man in particular: Sebastian Vettel. He's taken the honours in 2010, 2011 and amid strategic brilliance in 2015 but his most memorable victory is undoubtedly the Multi 21 race in 2013 where both Red Bull in 1st and 2nd and Mercedes in 3rd and 4th issued team-orders to stay put. Nico Rosberg did not attack his team-mate Hamilton but Vettel famously passed his furious Australian team-mate Mark Webber, who was naturally caught by surprise since he'd been told that his colleague would not attack him.

Lewis Hamilton has not found the circuit to be to his liking. It often favoured rival teams such as Ferrari or Red Bull, and 2016 saw the heartbreak of an engine failure clearing the way for Daniel Ricciardo to win the race, and Nico Rosberg to "settle for second" after Suzuka. His win in the most dominant Mercedes in 2014 remains his sole honours at the circuit.

After "losing serve" at Singapore, it is vital for Vettel that he beats Hamilton practically everywhere. Hamilton's 28 point lead is handily equal to the gap between first and second four times, meaning that even if Vettel wins five races and finishes second to Hamilton in the other, he still needs Hamilton to fail to follow him home at least once. Red Bulls and Bottas would complicate the situation mightily.

Further down the table, Sergio Perez is now level with Max Verstappen in the championship, utilising the exalted tactic of actually finishing races to reel in the young Dutchman. Verstappen, meanwhile, would be forgiven for punching walls worldwide.

Carlos Sainz' excellent fourth place at Singapore means the four-way battle between Williams, Toro Rosso, Renault and Haas is for fifth in the championship is yet again tightened. With Williams' current poor form, I would suggest that one may well be won by whichever constructor is employing Carlos Sainz for the last six races.

Whatever happens, farewell Sepang. Formula One will miss you.
Click to expand

We're all watching something very special this season. Mercedes had their problems prior to qualifying and once again we've been able to watch Lewis at his best, digging deep when he needed and remaining flawless in achieving pole. I honestly believe Hamilton has developed into the very best of the modern era by a significant margin. He had the benefit of being given a big break by starting his career with McLaren when they were strong, but the move to Mercedes was his own choice and he deserves every success he has achieved since, there will be much more to come, he's very comfortable in his own skin.

The very best by a significant margin, it seems like you buy into all his rubbish, i.g. during qualifying complaining about the tyres and how bad the car feels, during races the same etc. and pointing out how incredibly difficult it was after every session. He does the same BS as Alonso who also tries to increase the value of his performance through rhetoric. 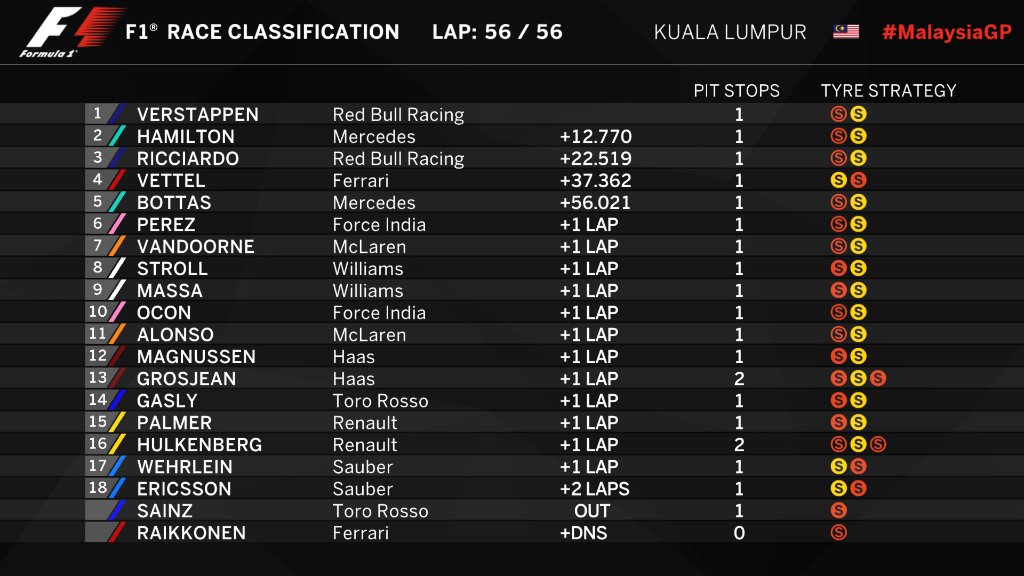 Rutherford said:
the same BS as Alonso
Click to expand

Valued Member
Not a bad race and what a bizarre event at the end. If Ferrari end up with a grid penalty in Suzuka it will be a great shame.

Is Vettel on a mission to hit at least one car from every team in, at best, "bizarre" circumstances this season?

No further action on Vettel - Stroll incident. There is suggestion that the gearbox might be damaged on Seb's car

I just knew that when Vettel came up to lap Alonso .. Fernando was going to make him work for it

Bottas was well beaten again and I wonder if there are some suggestions that he should not have had his contract renewed now
Last edited: 1 October 2017

Oh Vettel! Does the man have any spacial awareness?

as around the time after riccardio had overtaken Bottas & gone on to lose 14 secs in 8 laps. added to 8 tenths deficet, i thought it very good job bottas got that contract signed otherwise he could be out. but pressure still massively on because he has to find 3/4 sec a lap in suzuka

I've overlooked that because Hamilton been clawing the gap back to Vettel that Bottas is way off his pace. If Valtteri was not thinking of playing a support role I think this race has certainly cemented Toto's mind that he should now but he has to find extra pace from somewhere

Rutherford said:
The very best by a significant margin, it seems like you buy into all his rubbish,
Click to expand

No, I buy into his results.

i really enjoyed 1st half of the grand prix alot happening & potentially until the softs. it seemed to equalise, for me possibly Bottas worst race of season he way off in qualifying then as i mentioned above Riccardio after being held up overtook & was 1.2secs ahead after 1 lap, then went on to lose 14 secs in 8 laps which to 3rd fastest car is worrying & so slow vettel started last before the pit stop he had already all over the back of bottas

i thought vettel was outstanding & very nearly completely the miracle turnaround i mentioned like hungary 2014. unlucky not to be on the podium. technically impressive that vettel beat 2004 lap record. when they are recognised as the fastest f1 cars, low fuel, 3L V10 revving to 19000rpm new engine every weekend & weighing 605kg. but vettel beat it by 4 tenths with a 1.6L V6 revving to 15000rpm, engine that has to last 5 races & weighing 123kg more

brilliant fact nicked off someone else. Verstappen's only 2 F1 wins have been the race directly after kyvat been dumped by red bull

Mercedes bought new upgrades and they did not work and there is concern that the chassis is not working as well on circuits where top end power is not significant.

who could have gotten big points),
Renault

disappointed: they finished out of the points and behind Williams),

Alonso - did not make his customary lightning start

Perez - aside from the tangle another solid drive

Kewee said:
No, I buy into his results.
Click to expand

You mean finishing second in a two-car championship last year?

Lol, you are danger of winding up a certain Kewee...

I blame Hamilton and that bloody vegan diet!

who let off a big one then down the straight?