I just had a look back at last years race review on Wiki. This was when the cracks started to appear between Hamilton and Rosberg as Nico accused Lewis of deliberately slowing down in the middle stint to compromise his race and then got a right sulk on telling Hamilton he only cared about himself. Wah, wah, wah. Other than the race finishing under the safety car I can't see anything else which is memorable, although Jenson Button was found to have caused an accident with Pastor Maldonado. Go figure!

On to 2016. It's hard to see past a Mercedes pole, fastest lap and race win but which car? Nico Rosberg is 2 and O for 2016 and heads the championship by 17 points from his team mate who's had a few problems at the start in the first couple of races. No bitching about your team mate so far this season eh Nico? Lewis was almost certainly faster in Bahrain but his tangle with Bottas destroyed any chance of a win. Third with a bent car was quite some achievement.

Ferrari will, of course, offer the only (semi) serious opposition to the Mercedes pair but they haven't enjoyed the best reliability with two engine failures as they push to catch up. Kimi look to have a bit of his mojo back in Bahrain. No one will know whether Vettel could have done better but I suspect not.

What else can we look forward to? Romain Grosjean should finish fourth to maintain the sequence and this means he will win in Monaco... Hass have impressed, at least in RoGro hands, as has Pascal Wehrlein at Manor. Red Bull and Williams will scrap over the minor points, although Toro Rosso (even with last years Ferrari engine) look quite racey. You have to assume they will be battling with Force India though.

At McLaren I believe Van Doom will continue in place of Alonso as he still has a hurty rib, bless. Quite a race for the Belgian, the last driver to score points in a mid-season début in F1 was Sebastian Vettel. Whatever became of him? Button will head Manor and Sauber, assuming Sauber find enough cash down the back of the sofa to get the cars to Shanghai.

Probably the biggest question for the race weekend though is what qualifying format will be used? I've no idea and I suspect that those that control (I use that term in its loosest possible sense) don't have either. Let's see what occurs when the lights go out to start Q1. My money, regardless of the format, is a Mercedes 1-2 and Ferrari 3-4. The fastest guys should start at the front, that's what happens in all forms of motorsport and forcing them further down the grid just for the sake of "the show" is bloody stupid. No matter how interesting it is to see someone coming through the field, deliberately putting them there makes no sense whatsoever.

Well, there's my two pennuth. Let's have yours.

FB said:
Other than the race finishing under the safety car I can't see anything else which is memorable,
Click to expand

That was when Verstappen stopped on the main straight and the marshalls took abput 10 attempts to get the thing through the wall because they couldn't turn it properly, before Toro Rossi turned up to make sure they didn't do too much damage.

Contributor
That was comedy gold.

Ouch. The boys at Enstone are reeling from that knife blow. Mainly because they suspect that's prob going to be the ideal words to sum up their 2016 season come November. 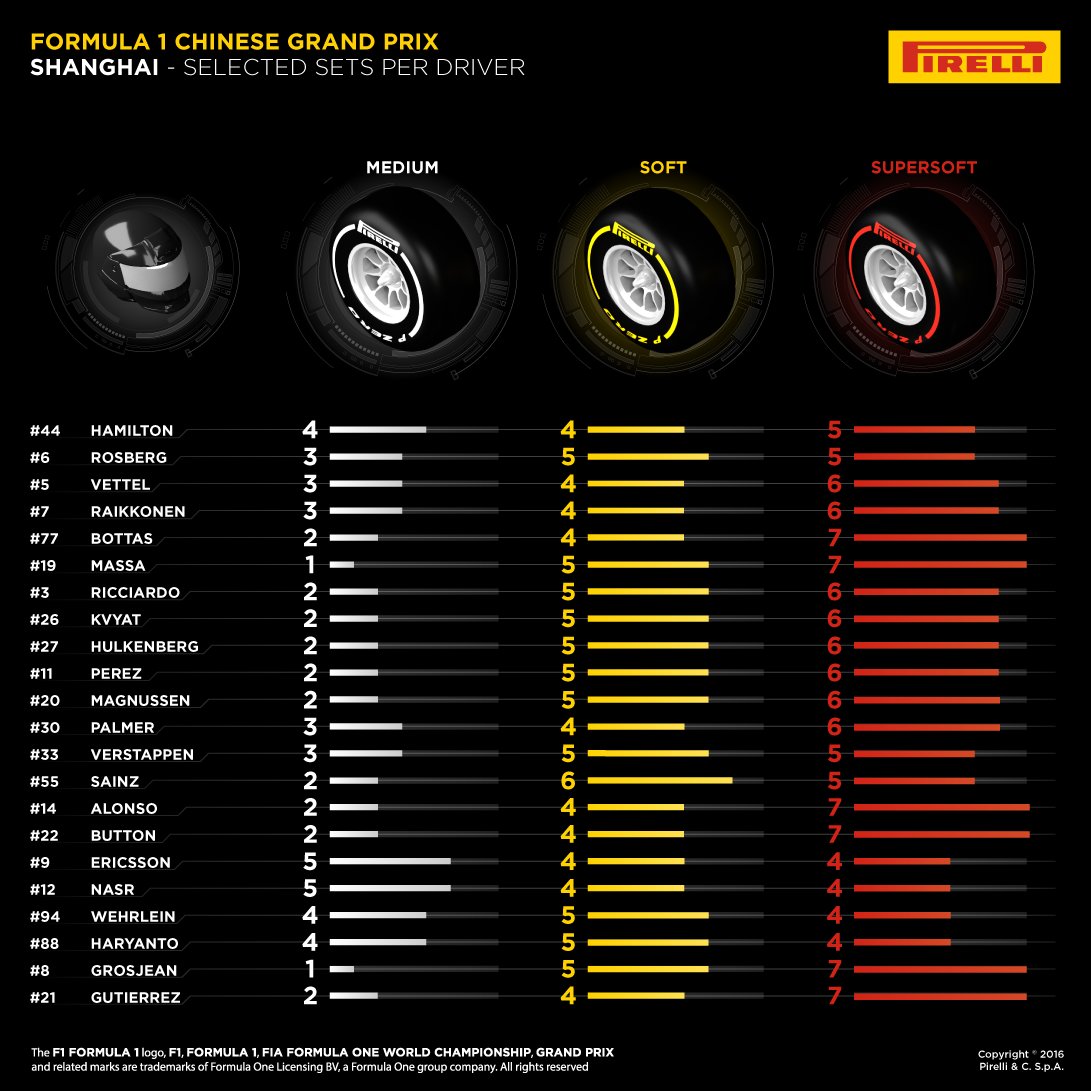 Haas and Williams don't expect to use the mediums, do they? Sauber, meanwhile, if they run...
Manor still haven't got their fax machine working by the looks of it. Ferrari may well have one extra set of the super-softs for the race, if they're canny.

Valued Member
Are Haas being optimistic by ordering tyres for Gutierrez?

Well I'm not so sure how effective the supersofts will be in the race. Last year they ran the soft and medium compounds and there is reasonably high tyre deg at this track. The mediums may be very effective in the race.

I have to say that the addition of an extra tyre compound choice is an awesome change for this year. The FIA could have looked like genius's had they implemented this rule change alone and without the quali restructuring. Now, with the way things are, this new rule is completely overshadowed by an awful qualifying shambles that is being forced upon us.

If we see a similar gain in lap time over the 2015 pole lap as we did in Australia/Bahrain, we could be looking at a lap in the 1:32s come qualifying assuming it stays dry. The fastest ever lap of the track is I think also the lap record, 1:32.2, which might be too much to ask for, but I'm genuinely looking forward to seeing how fast the lap times will be. Shame the qualifying format itself will still be rubbish though.

Well today we hear the FIA's ultimate plan. So have "faith" people.

Do we know when we'll find out about the democratic process to find a new Qualifying process?

Valued Member
Qualifying will be via a public vote of the F1.com website. I expect Rio Haryanto to be on pole.
O

Looking forward to the old quali System. Don't expect the race to be very exciting tho...

No long-lie next weekend then. Hohum.

Contributor
Hopefully qualifying will be in the wet just to mix up the grid a bit for the race on Sunday.

Staff Member
Premium Contributor
Record and watch later it is then.

cider_and_toast said:
Record and watch later it is then.
Click to expand

Sadly, this is now my default for F1.