Valued Member
This season's championship kicks off tomorrow with rounds 1-3 on the Brands Hatch Indy circuit. SInce Gordon Shedden won his second title at the same venue back in October there have been a number of changes to team and driver lineups, although the technical and sporting regulations, as well as the race calendar, are largely unchanged.

Halfords Yuasa Racing - Honda Civic Type R
The reigning champion's team see a return of Halfords sponsorship this season, black and orange replacing the corporate red and white. The team will continue to be led by Shedden and veteran team-mate Matt Neal, so continuity is the watchword, and while a new third entry for Andy Neate should mean another competitive car in the mix, I fear it's more likely to mean some robust driving and battered panels in the midfield battle. With the best handling car, manufacturer support and deep experience, Honda will again be the team to beat.

Subaru Team BMR - Subaru Levorg GT
The latest superteam on the block switches from VW to Subaru for 2016, on the basis that the Levorg's boxer engine and rear-wheel-drive layout is the best theoretical combination for the regulations as they currently stand. Former champions Jason Plato and Colin Turkington return with team boss Warren Scott on the driving strength. Fourth driver Aron Smith was unsurprisingly dumped after his uncomradely performance in last season's finale, and talented youngster James Cole takes his place. The car has barely turned a wheel heading in to the first round, so expect them to be playing catch-up over the balance of the season.

<Complicated set of sponsors> West Surrey Racing - BMW 125i M Sport
Rob Collard and Sam Tordoff will continue to campaign the rear-wheel-drive BMWs. Andy Priaulx has ended his long association with BMW to drive for Ford in GT racing, so his seat is taken by Jack Goff, moving across from Triple Eight MG after taking one win and finishing 9th in the points in 2015. WSR will want to bounce back after a poor title defence in 2015, and will be keen to take full advantage of the circuits that reward the BMW's good braking, traction and tyre preservation.

MG Racing RCIB Insurance - MG6 GT
After a disappointing season in 2015, Triple Eight will be hoping a change of colour scheme heralds a change in fortunes. RCIB Insurance come in as main sponsor from BMR, and two new drivers join the team. Josh Cook showed moments of promise in an uncompetitive Chevrolet Cruze last season, while 2015 Renault Clio Cup champion Ashley Sutton steps up into a plum drive for his BTCC debut.

Motorbase Performance - Ford Focus ST
Though not a manufacturer entry, Motorbase have strong race-winning pedigree, and retain Mat Jackson to drive their self-built Focus. 2013 champion Andrew Jordan comes in to replace James Cole in the other car, bringing Pirtek sponsorship with him from MG, and either car could be a strong outside bet for the title.

Tom Ingram returns in the Toyota Avensis run by Speedworks Motorsport, looking for this to be a breakthrough year after two runner-up finishes last season. Fan favourite Rob Austin will also campaign an Avensis, moving to front-wheel-drive for the first time, with Handy Motorsport.

Dave Newsham will be getting his boots muddy in the British Rallycross Championship this year, while Nicolas Hamilton is not expected to return either. Celebrity interest will be maintained however, arguably, by the presence of Emmerdale actor Kelvin Fletcher (no, me neither) in a Power Maxed Racing Chevrolet Cruze.

Really looking forward to this, delighted theyve got rid of ridiculous race 2 rules. I wonder if matt Jackson is a dark horse for championship as he was unbeatable at times in closing rounds. Although bemused why priaux left because he was arguably in biggest touring championship in Europe just behind V8 supercars globally & he was doing alright although as I said that ridiculous race 2 rule stopped him winning more races

Valued Member
Funny that Subaru, the masters of four wheel drive, have to make a two wheel drive car for the BTCC.

FB said:
Funny that Subaru, the masters of four wheel drive, have to make a two wheel drive car for the BTCC.
Click to expand

The road car is 4WD, but the race car will be RWD. I think under the rulebook 4WD is banned, and you can run 4WD cars in either front or rear configuration, but I mightbe a bit out of date on that.

Valued Member
It will make it a bit lighter if they have to take out the front diff, drive shafts and stuff. Should be fun to see how the go.

A bit off topic but how do the WTCC cars compare to the BTCC?

FB said:
A bit off topic but how do the WTCC cars compare to the BTCC?
Click to expand

I think the WTCC cars are a fair bit quicker since they changed the regulations when Citroen came in a couple of years back. BTCC has a lot more standard parts to keep costs low. Since WTCC no longer has a round in the UK there's no comparison in lap times to judge from.

Valued Member
Results and standings after Round 2: 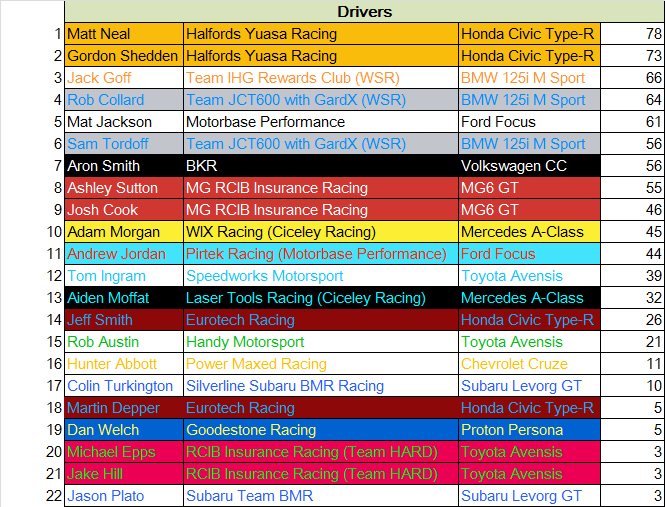 Staff Member
Premium Contributor
It's going to be a hell of a long year for Jason Plato.

Valued Member
Poor Jason. Well, it's nice to see some new faces at the front of the grid. Ingram, Sutton, Goff are all driving well (although Ingram could do with getting into fewer scrapes).

Staff Member
Premium Contributor
Carnage in race 1. Until the front left tyres started letting go it was an utterly brilliant race. There will be a lot of discussion now as to how the rest of the afternoon will play out.

Valued Member
It looked as though Neal, with maximum ballast, was backing the field up, leading to all the battling down the top ten. Great entertainment.

I suppose with the tyres, it is unseasonably warm, plus I don't think they test at Thruxton. So it's difficult for Dunlop, they already produce a special Thruxton tyre, but maybe they will need to consider an even more conservative option in future.

Premium Contributor
Some of the support races are brilliant.

Valued Member
Shedden was very unlucky, being the innocent victim twice, but it's good for the championship. Mat Jackson is picking up points very consistently and looks ominous, while the BMWs' best circuits are still to come.

Valued Member
Results and standings after Round 3:

Contributor
Congratulations to Matt Neal, again proving to me what a huge dick he is.

Valued Member
The fast, flowing and picturesque Oulton Park circuit hosts the fourth meeting of the championship tomorrow. Race 1 gets the green light at 12:17, and Colin Turkington will be leading the field away from pole position in his Subaru. Bonus points if you predicted that! Races 2 and 3 follow at 14:45 and 16:57, with the usual TOCA supports (MSA Formula, Clio Cup, Porsche Carrera GB and Ginettas) completing the show.