With 6 races in 8 weekends this summer, if ever there was a more appropriate sponsor for the 3rd race through this F1 endurance marathon it's Red Bull. We have arrived wide eyed and with the caffeine jitters back in Speilberg, Austria at The Red Bull Ring.

With around 10,000 miles traveled in the last 21 days the teams will be happy they are back in central Europe and may even be organised enough with there upcoming 'weekend off' into bringing some upgrade tweaks for the back to backs of Austria and Great Britain. Eyes peeled everyone for twiddly bits and go-faster stripes.

Last years race saw Lewis take pole in 1.08.455. It didn't help him in the race however as he made a poor get away (yup again) and Nico passed him into the first corner resulting in a follow the leader snooze fest up front for the remainder of the race. Williams have some form here with their front row lock out in 2014 and taking a podium 3rd place in both 2014 and 2015 they are certainly a dark horse to keep an eye on. Seb had a wheel nut problem last year which arguably robbed him of 3rd. Alonso will be hoping he can make it around the first lap without mounting Kimi as he did last year in what could of been a very serious crash. Actually with a DNF in 2014 as well, he will be hoping to simply finish.

So to this years race, Nico will be keen as mustard to build on his win in Baku, building on his earlier form and rebuilding that gap to Lewis. If he does take the win he will make it 3 wins in row at The Red Bull Ring, maintaining his record of being the one and only (F1) winner at this new iteration of the Speilberg track.

It's hard to see past a Mercedes win but the Ferraris have looked much improved since their token free 'reliability (in no way faster) upgrade' to their turbo. Who knows the Red Bull home advantage could finally kick in as well in what has been a poor event for them, finishing just 8th in 2014 and 10th last year. But if I was to have a cheeky each way bet it would be on Williams. I've just got a feeling.

Nico has rebuilt his championship lead to a snifter off a full win haul in points with 24 points clear. Seb is knocking on the back door just through shear consistency just 21 points behind Lewis. It certainly keeps the championship interesting, if Nico had lost the championship lead in Baku I can't help feel it would of been a slippy slope for him.

Contributor
Tyres for the RB ring 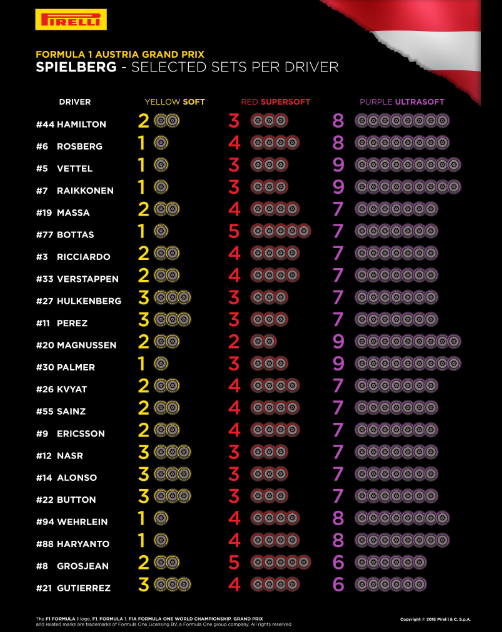 I feel like I've said this before almost every race so far this season (and have been wrong every time...) but we could actually see a new record lap being set in qualifying this weekend. Whether I estimate the lap time using the average % quicker 2016 has been compared to 2015 or compared 2014 doesn't matter, both predict a pole lap faster than the 1:07.908 set by Schumacher in 2003.

Contributor
There's a hole in F1, that should be filled by Schumacher. I'm sure he would have been advising and giving his views. It makes me sad.

Contributor
I don't miss either of them.

Valued Member
Why do we have to have corporate sponsorship of sporting venues? Couldn't it have kept its original name and then had Red Bull as sponsors? Still, not as bad as Airbus UK or Total Network Solutions in the Welsh football league.

I realise this makes me sound like a grumpy old git and the truth is I am.

This race could be another Mercedes procession

This track is the perfect example of simple being often the best method. Only 7 real corners, all of which offer their own challenge and with ample straights, passing even without DRS is possible.

It'll be good getting back to a track that is a known quantity. The drivers were too cautious in Baku.

Contributor
And now back to F1. What a relief. Or has Bernie Ecclestone resigned ?

Valued Member
Bernie is to be made PM and leader of the opposition.

Contributor
Horner said that he would expect Kvyat to be with Toro Rosso next year.

Contributor
I'm not going to see it live. Boo. I hope the live timing download feature works when watching it later in the afternoon, I would be lost without the timing screen.

Feel for Rubens Barrichello. Because the record he has held for over a decade weather permitting will be broken considering they 3/4 tenths of it in FP1

Contributor
OMG loving the new yellow rubble strips. They are destroying cars in P1 that run wide. Broken wings and now destroyed steering in Max's car. Pleeeaaase keep them for the race. Finally an actual punishment for leaving the track that isn't a wall.

Stay on track or break your car. Love it.

Good job the breakage was immediate as Max would have continued on his merry way at speed and there's no telling when the failure would have manifested itself. 18 is a good age to die as we all know it's downhill from there.

Valued Member
5 place grid drop for Vettel for having a new gearbox.

Davidson was spot on because them baguettes are a deterrent to stop on the track & out the gravel trap. Especially at T6 where to hit the baguettes you must have been all 4 wheels off the kerb never mind the track limits. So Verstappen should stop complaining because as I said he shouldn't have been out their in the 1st place

& wow that was rain 1/2hr into the session. Reminds me of being in the car park in my job ladt few weeks during "summer". Where it goes from a sunny to a lake in minutes. That Mercedes pitwall in torrential rain. Didn't help the typical German efficiency stereotype
Last edited: 1 July 2016