Welcome to the Autodromo Hermanos Rodriguez in Mexico. We are back after 23 years.

1992 was the last race held here. The reasons it was cancelled were principally due to money issues, but also in no small part because of increasingly severe bumps on the track that they couldn’t afford to fix. This coupled with problems in Mexico City itself including increasing air pollution and a rapidly growing and increasingly lawless population saw the venue get the axe.

In 2015 Mexico city is the most populous city, with the largest metropolitan area in the western hemisphere, some 3 times larger than greater London. The visit Mexico brochures would describe it as colourful and wild, yet fail to mention the car jacking, gun battles, subway gangs and a murder rate over 5 times higher than London. I would love to visit, but you certainly want to make sure you read your guide book before you get off the plane as walking into the wrong area is definitely bad for your health. The city is set at a dizzying height of 2250m (7380feet) above sea level. Although the drivers may not exactly need oxygen masks, the cars at any rate will feel under powered here from the thinner air. Aero also works less efficiently in thinner air. With so many variables, I am hoping for a shake up in the running order as some teams nail the engine and areo settings and others mess it up.

The Hermanos Rodriguez Circuit has had $300 million thrown at it from state, federal and private investors in order to pay for what is now a heavily modified complex since our last visit here.

The old pits were demolished, the track, kerbs and crash barriers ripped up and the grandstands bulldozed. In early 2014 this place was literally a muddy field.

All the corners have been redesigned, mostly to accommodate safety run offs and aid overtaking, but most retain the spirit of the corner they replace such as the hair pin and the esses. A bigger change is the Peraltada that is now cut in half, with the ‘remaining’ half now slightly tighter and the removed half now one of the most fun stadium sections I have seen with the track going between 2 grandstands. I can already hear the groans about chopping up this famous corner, but the bottom line is the Peraltada had to be changed due to the proximity of the buildings preventing the existing small run off from being expanded. A hard concrete wall at the exit of a 186mph corner is simply not possible today. Some videos of the old corner and why it was changed are at the foot of this article.

The entire track has been laid anew to get rid of the horrendous bumps. No doubt they will return in time as the whole area is built on a lake bed next to 3 tectonic plate fault lines and is prone to earth quakes. But with any luck the track will get a good few years of smooth running.

As for the weather, at this point Hurricane Patricia seems to of been all talk and no trousers.Having said that there is little news of damage at the circuit. Maybe thats a good thing. Hopefully we will be getting a race. If we do, almost certainly it will be wet, the forecast is for thunderstorms all week.

So at this point in the season with 16 races down and just 3 to go, Merecedes and Lewis are our world champions

and we are now just racing for kicks. which is absolutely fine by me. I’m looking forward to this one, lets hope it delivers. 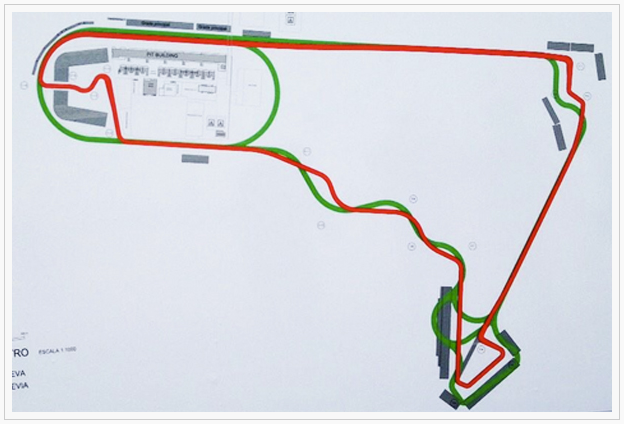 Quality write up. The videos were a great touch. I'm excited to see a "new" circuit on the calendar.

Nobody has raced an F1 car at such an altitude since Kyalami in 1993. Being 7,000 feet up, the turbos are gonna be working overtime, I except lots of trouble (and McLaren being even further off than normal


Track changes are ok, should have kept the esses, they were a really nice feature of the track.

Full grandstands are gonna be expected, the place sold out in an hour. We need more venues like this. Mexico City might be a crime ridden, polluted, politically unstable place, but the fans know how to turn up.

Rubbish locations like Korea, India, Valencia and Turkey (despite nice tracks, mostly) have come and gone, but traditional staples like Austria and Mexico are back. Now if South Africa and France came back, F1 would have gone full circle

Contributor
I always used to enjoy Mexico and the Mansell move on Burger is up there with the best moves I've ever seen - certainly the bravest.

Interestingly the great Murry Walker revealed that Mexico was one of the few races he never used to attend and would do the commentary safe and warm from a studio in the UK.

Mexico was known for Earthquakes so the track does get bumpy

I think the long straight will kill Mclaren and the Renault powered cars and they are sitting ducks
Last edited: 27 October 2015

My knowledge of Mexico City doesn't come from movies, it comes from news stories. There are places it simply is not safe to go, tourist or not. As long as you stay in the heavily patrolled, well-protected areas of the city, you might be okay (no guarantees!) The drug cartel stuff is real, and a potential threat if you go outside of the rich areas of Mexico City - in some ways, it has similarities to much of Rio de Janeiro.

Another thing I just noticed - its a short little track, 4.3 km. I like tracks like that, rather than the stock standard 5.5 km.

i like to watch short tracks, but I sure do hate driving them when I'm playing racing games - the repetition of it lap after lap makes races seem much longer, and it starts to feel like a marathon, more so when it's a circuit with a lot of turns. I'm too young to really have any strong memories about the circuit, but I'd have to imagine the high altitude and short track combination is very physically challenging for the drivers? Was that something they contended with in the past at Autodromo Hermanos Rodriguez? How much is driver fitness going to come into this race?

Contributor
Onboard vid of the new track

Staff Member
I wasn't sure whether to post this in the non news thread instead.

Looks like the cars could hit Monza top speeds with max downforce settings. This is for sure going to be an extreme track.

Valued Member
How many places have they lost in total now?

Lewis has an extra star on his helmet, I expect a hefty fine for that

Jos the Boss said:
Lewis has an extra star on his helmet, I expect a hefty fine for that
Click to expand

Pics or no fine.

well we should see some overtaking with the long straight

Strange. We were told Alonso's problem in the latter stages of the Austin GP was caused by a "sensor issue" but there was nothing wrong with the engine itself. So why change it?

This is the problem with the stupid tokens rule and no engine development allowed during the season .

Thank goodness they're simplifying the grid penalties for next year - McLaren won't have to start four timezones away!