The penultimate test before the start of the season is under way so time for us all to speculate on what will happen in Australia as the teams actually race one another for the first time under the revised eco-regs. Gone are the anteater snouts, although the cars still aren't particularly pretty (to my eye at least) and we have a mix up on the driver front.

Mercedes continue with double World Champion Lewis Hamilton, who wont use car No.1 (BOO!) and Nico Rosberg whilst their likely challenges have been playing musical chairs. Fernando Alonso has gone back to McLaren and Ron Dennis is doing his Basil Fawlty impression "don't mentioned 2007. I mentioned it once but I think I got away with it" and JB retains his seat after fevered speculation

that he would be dropped in favour of K Mag to see how well Honda can do on their return to F1 after a 6 year absence.

Vettel slips into Fernando's seat at Ferrari with the hope of dragging the red menace back to it's Schumacher glory days or perhaps even back to it's real glory days of being "The" F1 team. Kimi Raikkonen carries on Ferrari, presumably the team management saw something else last season compared to us humble fans to justify keeping him on for another bash. Either that or they discovered that Alonso had been feeding Kimi Magnum's laced with mogadon.

The Honey Badger will smile his way through the season as Red Bull's defacto No.1 with Danni Kyvat taking his place as the junior driver. What chance of a repeat of 2014 with the new boy at Red Bull showing the incumbent how it's done? Will Renault have manged to close the gap to the Mercedes power unit? As the only other team to win a race in 2014 Red Bull should be best placed to challenge the Mercedes but who knows what the other teams have been up to over the winter.

No change at Williams, Massa and Bottas continue with Mercedes power. I still can't get used to Williams Mercedes but then I'm just an old git. Assuming Williams have the same system behind the driver as the works team and their car has evolved over the winter could we see Frank's team challenging for wins?

The RB junior team has a completely new line up with Carlos Sainz and Max Verstappen at Toro Rosso. I would suggest they are as likely to be allowed to beat the main Red Bull team as Williams are the Mercs but then I'm just cynical.

Lotus, or Team Enstone as some might say, continue with Grosjean and some bloke with braces on his teeth and a huge bag full of petro dollars, this time with a Merc engine to push it along. Gone is the double nose in favour of a far more orthodox car. They should be able to challenge Force India for places this season but I doubt they will be much higher up. FI have a stable driver line up with Hulkenberg and Perez but there is much speculation about the dire state of their finances as rumours abound that Vijay Mallay is on his uppers. It may explain the haircut as he can't have paid for someone to do that to his head.

And finally to Sauber. Felipe Nasr and Marcus Ericsson have replaced Gutirrez and Sutil, I woudl presume because of the size of pay cheque they can provide. Sauber need a good season as scoring Null Points in 2014 must have cost them big in the FOM prize money pay out. They have also been very conservative in their car design but if testing is to be believed it's a fairly speedy machine and I cannot believe they won't pick up a few points this year.

Marussia or Manor GP are threatening to turn up in last years car just to make Bob Fernley feel guilty for vetoing the idea of team using the 2014 car for the first 2 or 3 races but, as has been pointed out in the past, this is the Piranha Club so don't expect any favours from the other teams.

So what to expect at Albert Park? I suspect Mercedes will still be the team to beat but the gap will have closed to Red Bull and Ferrari. Williams will be a subservient No.2 team and be close but not quite close enough. In the midfield I expect lots of racing as the team left in F1 for 2015 all appear to be very similar in terms of machinery, cash and driver capabilities. The big unanswered question is how the Mclaren Honda will perform and I don't think we will find that out until FP1 on the Friday or even come the end of the race on Sunday.

Welcome back F1, we have missed you.
Click to expand

The pecking order at the moment

So Mclaren Honda can still spring a surprise
M

FB said:
The last test before the start of the season is under way
Click to expand

Is it? I thought there was another one starting on the 26th Feb and ending on 1st March.

Valued Member
Yeah there is.
M

Contributor
It's at the same track though so I'll let you off with a warning just this once..

Il_leone said:
The pecking order at the moment

In truth I'm not sure anyone can say where McLaren are in that order, they could be in pole position or they could be plumb last..

Contributor
When the work out what an insulator is they might starting to get somewhere. 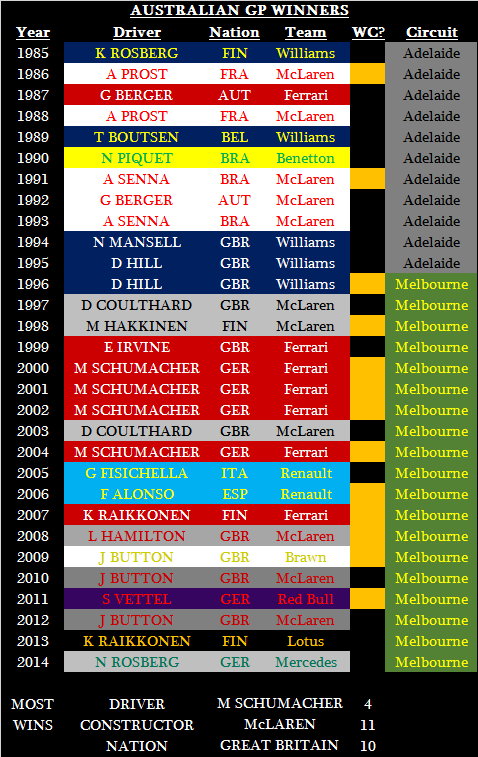 As Sgt Major Shutup would say "Fine pair of shoulders show 'em of, show em off."

Contributor
At the moment the question for McLaren is how many laps can they do? I don't see JB on the top step of the podium this year.

Mephistopheles said:
So Kimi and Jenson are the only two drivers to win it for two different teams then
Click to expand

Alonso's participation at the Australian GP not guaranteed:

Q: How many times in that piece can you spot Ron contradict himself? I spotted quite a few...

Valued Member
This is all very odd isn't it.

You can say that again. Like that guy was saying the other day, curiouser and curiouser.
According to Ron FA is in "perfect" condition and raring to go, can't remember anything of the incident, doesn't even have a concussion, "only" took 30 G's on impact (?), and his participation will depend on doctor's advice.

What the hell's going on here?

Contributor
I don't see any more room for conspiracy/controversy in this, it all makes perfect sense to me.

Who said anything about conspiracy theories? Just saying Dennis is making a total hash of his press communications, particularly when he talks of Alonso as being injury-free while simultaneously opiniating it was akin to a "brain whiplash" blow.

The latter most certainly DOES come under the classification of "brain injury" whether or not bleeding takes place, particularly when it is accompanied by loss of consciousness and memory loss. Hence my use of the term "self-contradiction",

Contributor
He'll be driving in Australia.

Valued Member
Of that I have no doubt.

You need a Dictionary and a Phrase book and a Thesaurus to understand Ron and even then it's confusing.