F1 is back In Speilberg, Austria for the first time in 11 years.

The Speilberg race track has a long history in F1. The original track was know as the Osterrelchring. The track was built in 1969 to replace the Zeltweg airfield circuit, and first debuted in F1 in 1970. It was a very fast circuit with every corner a fast sweeping spectacle meaning drivers never had to drop below 3rd gear. However large sections of the track had little run off and some sections including the start finish straight were very narrow. Mark Donohue’s death in 1975 resulted in alterations to the Vost-Hugel Kurve and in 1977 the Hella-Licht chicane was added. After that Allan Prost pushed for larger run off’s rather than more track alterations. These followed in some, but not all corners.

The Osterrelchring was a regular offering until 1987 when the turbo era pushed engine power up to 1400 bhp in quailfying. The speeds achieved approaching the Bosch Kurve were well over 200mph, a corner still with little run off. Other corners were also very fast and the track was considered to be dangerous and having out grown F1’s in its new faster era.

But the real crunch came after two restarts were required in 1987 due to crashes caused by the narrow start finish straight. With the cars now over 6 feet wide, the straight was not wide enough to get much more than 2 cars side by side. F1 had had enough, and Austria was dropped in favour of Budapest.

The track gradually fell into disrepair until the Austrian Telephone Company paid for it’s revamping by Herman Tilke in return for it being renamed the A1-Ring. The A1-Ring returned to the calendar in 1997. Most of the fast corners had gone in favour of 3 tight corners introduced to give more overtaking opportunities. It was also much shorter, down from 3.67 miles too just 2.68 miles. The A1 Ring enjoyed a 7 year run until it was again dropped after 2003.

In 2004 the pit buildings and grandstands were demolished in anticipation of building new facilities. Then the money ran out. This rendered the track unusable for any motorsport. It lay abandoned until Red Bull started 70million Euro renovation works in 2008. The track reopened in 2011 as the renamed Red Bull Ring.

And now we’re back.

We are now past 1/3rd distance in the season. In the Constructors Championship the Mercedes looks more or less unbeatable barring double ERS failures. It seems unlikey anyone will find 1-2 second a lap over them in the next few races in order to amount a challenge. I think it is more likely it will be the end of the season before things close up.

However Mercedes ‘no number 1’ policy is giving us a great battle between Lewis and Nico for the World Drivers Championship. With Nico now 22 points clear following Lewis's 2nd DNF of the year, Lewis really has a challenge on now to catch Rosberg. I'm sure he is hoping for a good luck, bad luck switch with his team mate.

Great to see Dan taking his first win, and with The Red Bull Ring being Red Bulls home track who knows we may see him on the top step again.

Somehow I think this ain't over by a long shot.

Valued Member
I liked the A1-Ring, it always produced something interesting. Q1 could be interesting though, there's not going to be an abundance of space, is there?

Contributor
What on earth was Mansell doing in the second start? Crawling along like that he should have move to the right onto the grass; that would probably have avoided the problems. Oh, sorry, Mansell, yes.

Contributor
With hardly any corners at all on this one its likely that unless the junk in your trunk.is Merc powered you're not getting anywhere in this one.

Can't say its the most interesting track but apparently it produces good racing although it didn't in the WSBR last year. Speaking of which KMag comes to Austria having raced on the circuit in the last 12 months whilst most have never raced on it at all. If Mclaren can produce the race pace Button showed at the end in Canada then he is my dark horse for the weekend.

Contributor
An awful and, possibly, unfair thought but could RB have 'built in' any advantages for their own cars? If so, one should hope that they are at least a year out of date!

Valued Member
For those who remember the great days of the Ostereichring here's an overlay of the new circuit on the old: 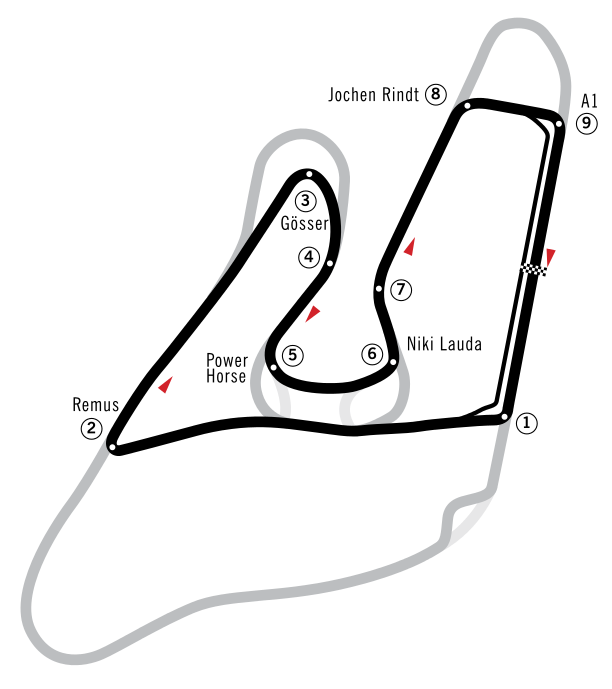 Almost as dreadful as what they did to Hockenheim.

Valued Member
This made me chuckle - Mercedes claim they have been kicked out of the nearest hotel to the circuit as it's owned by one Deitrich Mateschitz. If true I suspect there will be German tanks along the border between Germany and Austria the week before the German GP but no one will realise the cars are coming from Milton Keynes

Jen with the current state of Renault this could be one of the worst tracks for Red Bull all year!

FB said:
For those who remember the great days of the Ostereichring here's an overlay of the new circuit on the old:

Almost as dreadful as what they did to Hockenheim.
Click to expand

That is tame...why did they change the layout? I don't mind this current track from what I can remember, but compared to the old one it doesn't look great.

I remember turn one being a great addition, but I don't remember anywhere else you could overtake here. turn 3 maybe.

Contributor
I suggested the track had a new lay out a week or so ago and some of my fellow Apexers enlightened me that I was wrong.

Apparently the lay out is the same as when F1 last raced there.

Contributor
The track is a little boring, but at least there was some overtaking in the past. With the DRS gimmick they could probably have added a few more interesting corners, but I think racing will be fine.

Contributor
It seems like it'll be a fun one. We need more short tracks. Plus, the fans are getting more value for money

Valued Member
This was the proposed redesign but it never got built.

Contributor
That redesign looks awkward. I would make the (very slow) Remus corner slightly less tight to improve the flowing nature of the track. Possibly a decreasing-radius corner would be much more challenging.

Contributor
Nice to see F1 back at the A-1 Ring, just hope the race is as exciting as the race we just had in Canada.

I loved the old circuit. I remember in 86 the awesomely powerful Benetton BMWs should have won, but out Mercedes'd Mercedes and both cars conked out. In a sort of parallel with yesterday, Fabi's Benetton snuffed it straight after he'd overtaken team-mate Gerhard Berger.....


You mean a Maxwell Smart deploy stingers lever to take out the four tyres of a non RBR car as it enters pitlane ? That kind of "built in" advantage ? Say ... where is Helmut and where is that evil laugh coming from ?

Valued Member
Very happy that we are racing here again ... lots of high speed downforce type corners should tighten up gap between the Merc's and the RBR's ... not sure it will be enough to challenge overall, but maybe the pressure of being on 8 to 12 seconds back rather than 28 to 38 seconds back will add some extra spice whilst Nico and Lewis duke it out ...