Korea almost provided an exciting race, helped with a liberal sprinkling of safety cars, but nothing could stop Vettel scampering off into the lead which he only lost for a few laps during the obligatory pit stops. Japan, at the traditional and technically demanding Suzuka circuit, is up next and last year Vettel took the Grand Chelem so I suspect the race winner, mechanical problems aside, is almost pre-determined.

The real race then looks to be for second. Lotus managed two on the podium in Korea with Romain Grosjean being a bit unhappy on the 3rd step. Mercedes flattered to deceive in qualifying, as they have done so many times this season, and struggled in the race with more tyre issues. Fernando Alonso has to have a good result to keep his wafer thin Drivers Championship chances alive.

Sauber performed well at Suzuka last year and after 4th in Korea Nico Hulkenberg will be looking to keep himself in the shop window for a better drive in 2014. Behind this lot there is not much going on. McLaren will qualify badly and then do better in the race. Will Paul di Resta manage a 5th consecutive dnf? Who will Adrian Sutil run into this weekend? I'm sure both Toro Rosso drivers will have different motivations; Ricciardo to prove Red Bull made the right choice promoting him to the senior team, Vergne to show they made the wrong decision.

I'd love to see Williams do well this weekend but somehow don't think they will. Caterham and Marussia must be hoping for a wet race to stand any chance of getting close to some points, we'll have to wait and see if their luck is in. Have I forgotten anyone? Oh yes, Felipe Massa. He was second last year but there is about as much chance of that happening again as I have of making the British Ladies Olympic Netball Team - go on Felipe prove me wrong and I'll go for the try-outs!
Last edited: 7 October 2013
Click to expand

Contributor
I only think of wafers when I am having ice cream.

Contributor
Another early one. I will be tired and irritable all weekend.

One of the only tracks left that tests both the driver and the car. Mistakes are punished. The only drawback is there's not a lot of overtaking places, but that's because this track was designed as a test track.

As for the race, the winner is already known. Unless weather intervenes.

Contributor
My duvet will remain firmly unruffled for this one, as I allow my Sky+ to take the strain instead - a pity really, as I used to love getting up early to watch this race. I really can't see the point in disrupting my sleep pattern at the moment though, seeing as there is no prospect of a competition for the race win.
Everyone saying "but we're watching Vettel make history, with his exceptional superiority" is, quite frankly, trying to justify to themselves why they still bother to watch. Yes - watching the rest of the field squabbling over the runner-up slot is entertaining, but ultimately it's a bit like copping off with the stunning girl's frumpy mate, in the hope that you're getting the next best thing - you get mildly excited about it at the the time, but the trouble comes when you wake up the next morning and realise that it really wasn't anywhere close to being as good or as satisfying as you imagine it would have been with the stunning one.

Contributor
I won't be watching this one live either. I'll be in a hotel room with a stunning woman! I'll catch the replay when I'm back home.

Confucius he say copping off with stunning woman always less satisfying in reality than her not-so good looking friend.

Greenlantern101 said:
I only think of wafers when I am having ice cream.
Click to expand

FB Awe you fixed it. I look like a loon now.

... and after F1Yorkshire catches his replay at home he might just watch the F1 replay whilst havng a cigarette. Unless of course he doesn't smoke ... like tyres do...

... and rufus_mcdufus realises he should have saved that gag for China. Not that I know who Confucius' Japanese opposite number would be.

Contributor
I'm not so sure rufus_mcdufus Having a model for a girlfriend is very satisfying.

Should we talk about the gp or don't we care as we already know the result?
Last edited: 7 October 2013

Oops, isn't this a traditional warm up?

Okay then, since I can't be arsed to do anything else but spend time in Clip ... back to the OP ...

Suzuka is one of my fave tracks. I can't recall a race there that wasn't tense. Do we know what the tyre selection will be? I hope they are the harder of the compounds. I notice from KekeTheKing 's overtaking videos that the top speeds were in excess of 300kph so it's a good deal faster than Korea. Maybe we'll see a different pecking order but who knows.

Traction out of that last knadgery chicken will favour Red Bull, Sauber and the other Renault engined cars for overtakes into turn one and two. There may be some overtaking potential for he rest up to and through Spoon and on the run down to 130R. If there are not too many marbles the brave might give us a show in 130R itself.

Valued Member
I don't think this race is over quite yet. Remember on the end of Vettel's four-race run at Abu Dhabi last year. We all went into qualifying saying "no doubt about the winner" only to find Hamilton starting from pole and Vettel beaten by Webber even after not having enough fuel in the car. He's been fantastic, but we should at least offer him the courtesy of displaying his brilliance before awarding him a race.

LifeW12 said:
As for the race, the winner is already known. Unless weather intervenes.
Click to expand

I'll have a word with Him.

Which God gethinceri , the driver or the weather one?

Contributor
You know of whom I speak, He will decide the weather. As usual.

Contributor
Tempted to a bet on Gutierrez for his first top ten finish in Suzuka. He does seem to be gradually improving.

Are you Eddie Irvine or James Hunt in disguise then?

Contributor
Looking like a dry race on the long forecasts at the moment. Another Vettel win then. 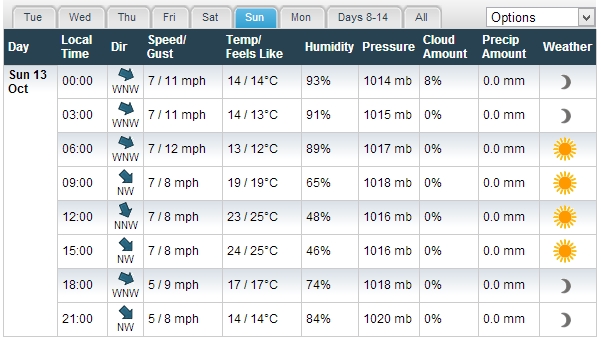