It all comes down to the final race, sort of. There is no ‘versus’ this year, in terms of the WDC or the WCC – RBR have them both in the bag.

Alonso is safely second in the driver’s championship and, realistically, third place will go to either Hamilton or Webber – with Rosberg as a long shot if Hamilton and Webber fail to finish. Mark Webber usually excels here, and as this is his last race in F1, he may decide to go out in a blaze of glory and capitalise on Hamilton’s lack of luck in Brazil.

Second place in the WCC is as equally exciting, with Mercedes and Ferrari contending for the honour and cash. On paper, it should be Mercedes with two strong drivers; however, Massa sometimes does well at his home track, winning in 2006 and 2008, and may yet be inclined to pull his finger out again for his home fans!

Rumour has that the circuit is one of the most demanding for the drivers, and that it is loved by teams and fans alike but is that enough to create an exciting race when there is sod all at stake except for individual drivers who are still looking for next year’s seat?

Interlagos has been part of the F1 circus for 40 years, becoming a permanent fixture in 1990 and has been the venue for many deciding battles – sadly, not so this year – but it could yet throw up a stonking race.
Click to expand

Here be dragons. · 72 · From Northamptonshire
Contributor

Contributor
Its almost certainly the last time we will ever hear V8's in F1 as well. The future is electric don't you know.

Contributor
Not at current prices!

Rosberg is 26 points behine Hamilton so he won't be finishing 3rd.

Unfortunately I think Webber will take it

The question is will Vettel let him win and assure him of third?

Supporter
With 9 race wins on the trot at stake, there isn't a chance in hell that Seb will be feeling charitable enough to engineer a fairy-tale ride into the sunset for Webber.

KekeTheKing said:
With 9 race wins on the trot at stake, there isn't a chance in hell that Seb will be feeling charitable enough to engineer a fairy-tale ride into the sunset for Webber.
Click to expand

Nor is it in his nature to do so.

Which drivers in F1 history have retired on a win?

Contributor
1st one that springs to mind is Mansell in 94. Not sure if he raced again after that final race in Oz

Valued Member
He managed to squeeze his ample rump into the McLaren twice in 1995.

Retired on a win? None spring immediately to mind - Stewart perhaps? I know Clark won his last F1 race but didn't retire...

Contributor
Westy, other than a couple of Indy drivers, only Jim Clark retired on a win, but that was due to his death between races.

Westy said:
Which drivers in F1 history have retired on a win?
Click to expand

Valued Member
The seasons' nearly over!!!!!!!!!!!!! I suspect I'll watch the first lap and if Vettel's leading I'll turn over again

Contributor
Can't wait for next March...unless Vettel's way out front again, then I might just call it a day with it all and find something more constructive to do with my weekends.

Where's the smiley with all fingers, toes, arms and legs crossed?

Contributor
Isn't that the Manx flag?

Contributor
At the end of the race on Sunday, not only could Sebastian Vettel have just won his 9th race in a row, he will then probably have scored more points on his own than, the team that finishes 2nd in the constructors championship.

The F1 website predicts rain throughout the weekend. This is gonna be the best race of the season - you heard it here first 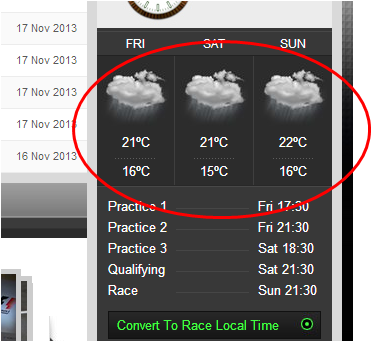 Valued Member
Rain. Interlagos. You know what that means.