Staff Member
It's time to debate who was driver of the weekend for the British GP.

Who gets your vote?

Plenty to choose from this week with some great drives throughout the field.

Don't forget, it's for the whole weekend and each drivers' relative car capabilities need to be taken into account.

Valued Member
For the best damage limitation I have seen anywhere in any sport at any time. Lewis. Hamilton.

Valued Member
Not always the people's favourite, but Button gets my vote (legitimately this time

) for his drive from 14th to 4th in a car he described as a dog on Saturday.

Mark Webber gets an honourable runner up for sticking two fingers up at a team that seemed out to get him and winning anyway.

Contributor
This is really a difficult choice as there were many great performances: Webber sticking it to Horner and dominating the race, Button's recovery from a horrible starting position (far more impressive than Hamilton's drive IMHO), Rubens showing that he still has it, despite being a geezer.

But I am going for Rosberg. He never set a foot wrong all weekend, and, to my mind, once again proved that the modifications done to the chassis were made to correct shortcomings in the car, NOT to favour MS as so many claim. Gaining a podium finish in what is, at best, the fourth-best car on the grid (and Williams seems to be putting even that position in jeopardy

Contributor
As has been said, there were so many great drives throughout the field.

Mark sticking it to his team; Lewis keeping track of him throughout the race; Rosberg showing great maturity; Rubens and Williams back on song and showing that Valencia was not a fluke; Kamui and Sutil producing impressive drives.

But I'm going for Button. After a shocking Friday and Saturday, he showed why he is a world champion by staying calm, putting is head down and producing a great drive in an 'undriveable car'. That call to stay out on softs to jump three places showed his (and Mclaren's) strategic skill and was extremely impressive. Like Webber, Jenson is growing ever higher in my estimation and is very much keeping Hamilton on his toes.
S

Supporter
For all the previously mentioned good shouts above i feel it's almost my duty to look outside those expected to do well on a race by race basis.

Given his previous and lack of time in the car up till this weekend i'm pretty sure all were wondering as i was WTH well HRT playing at, and probably feared the worse after friday practice seeing the neck starting to go and the 1 sec time differential to Chandhok. But he plugged away and the gap reduced all weekend culminating to a finishing spot just 0.6 secs behind Chandhok and a faster race lap time. Also did very well at staying out of everyones way even if it was for postion!

Other than that i would have voted Rosberg for another good effort under the radar, Barrichello for the best lap in a reasonably priced car and Webber for quote of the weekend.

Contributor
I would say to those going for Button,

Yes, he made a blinding start, making up six places. but the start is always the best opportunity for making such big gains. The tyre stop strategy that gained him his further places was superb but it was a pre-planned team effort, including a lighter fuel load; not just Jenson's driving alone. And taking the weekend as a whole, you can't ignore his poor qualifying and practice performances.

If I could I would vote for joint winners.

I have before described Mark Webber as a 'nearly man', and overly aggressive to the point of being dangerous. But after such a recovery from that awful accident of two weeks ago to such a dominant and determined win yesterday, coupled with his attitude in the face of his team's clear bias towards his teammate, my opinion of him as a man and as a driver has gone up enormously.

But I have to give the vote (just) to Lewis Hamilton, for dragging an underperforming car around practice and qualifying to get 4th place on the grid, passing two very talented and aggressive racers in the first couple of corners and then sticking close to Webber (albeit never really challenging him) in a far faster machine to take second place, the two of them well ahead of anyone else even after the safety car.
J

If you could vote thrice...

I hope Adam Parr can continue to steer Williams upwards from now on - I'm really enjoying the combo of "the Hulk", & Rubens.

Supporter
It has to be Nico Rosberg for me.

He fought off Alonso with ease in the opening portion of the race, made a daring move past Alguersuari, and drove a slightly injured car to a podium.

Solid drive by Webber, and Hamilton was stellar as usual, which is why I couldn't give him the nod this weekend. I've come to expect these performances from Lewis.

Staff Member
This is a tough one as there were some great performances this weekend.

So, taken as a weekend, I'm going to go for Hamilton.

To qualify 4th in a car which until the night before was in a completely different configuration was extremely impressive
Especially when you consider where his teammate qualified.

Granted he didn't do anything during the race but then there wasn't much he could do.
He had a good start, closed within a few centimetres of Mark by the first corner and then stuck with him for the whole race.
It was always Mark's race but until the SC came out, those 2 would have ended up a couple of pit stops ahead of everyone else.

No-one stood out for me.

They all did a good job, pretty much.

I know I'm sitting on the fence here but none of the performances left me completely delighted (except for my guys Lewis and Kamui).

Valued Member
Too many stellar drives to pick just one but I have and through gritted teeth I've gone for Wet Towel........ to be almost a lap down and to drive 51 laps on the same set of boots it was quite impressive for him to storm back up to 7th (admittedly with a bit of bumper cars) and I know the he greatly benefited from the safety car he still had to pass 15 or so cars to get some valuable points.

Great drives from Mark, stick it Horner, Lewis and Jenson for pulling off a great result in a car that only came together before Saturday FP, Nico got a great podium and Kamui for getting a decent result from the Sauber.

Valued Member
As a bit of a wild card choice I'm going for Adrian Sutil - miles ahead of his team mate on pace, made a very courageous and committed pass on Michael Schumacher, and then kept a much faster Vettel behind without any bully-boy antics, until Seb decided to go for an all-or-nothing lunge.

Hmm, difficult this week. I will go for Rosberg: quiet but effective, as usual.

laFrau said:
Hmm, difficult this week. I will go for Rosberg: quiet but effective, as usual.
Click to expand

Not forgetting setting a good benchmark for his "relatively unknown" team mate.

Valued Member
This was a tricky one. Webber didn't miss a beat despite having the front wing from a 1981 Arrows (see pic) fitted to his car. Hamilton controlled everything to bring his car home in a place no one really expected. Rosberg also managed to achieve a placing few thought likely. Button did well from his lowly grid position but, let's be honest, he shouldn't really have been down there now should he?

Sutil impressed me for the same reasons Galahad has mentioned but I have chosen to go for the old chap Rubens. Nothing particularly "spellbinding" about his qualifying or drive (apart from the fact that he was 5th in a Williams people!) but he is showing that there is life in the old dog yet and as Williams improve their chassis I can only hope he and they creep high up the placings. 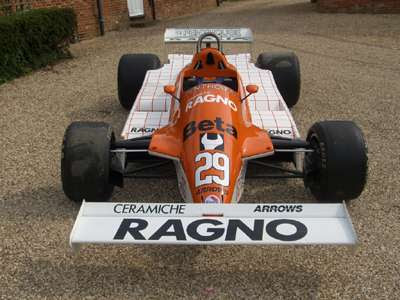 Staff Member
Premium Contributor
It could really be almost anybody this weekend especially the guys who finished in the top 5 but I've had to go for Webber. "Not bad for a number two" has to be one of the funniest things I've heard for a while.

Joking aside, the Mclarens managing to salvage their weekend in 2nd and 4th, Rosberg putting that Merc on the podium, Rubens scoring another great points haul in the fast improving Williams, Vettels superb recovery from the back and several other stirling performances could take the title. What a list of choices from a great GP weekend.

Contributor
Kubica put that Renault where it didn't deserve to be, and was looking strong on race day up until his car let him down. He gets my vote!

Staff Member
Yes, what a great shame for Robert.

He was on for a good finish and some decent points until his differential failure.

Galahad said:
As a bit of a wild card choice I'm going for Adrian Sutil - miles ahead of his team mate on pace, made a very courageous and committed pass on Michael Schumacher, and then kept a much faster Vettel behind without any bully-boy antics, until Seb decided to go for an all-or-nothing lunge.
Click to expand

^^^^^ I agree with Mr G.
Sutil had a stellar weekend and made a darn good fist of keeping Vettel from overtaking him.

I will say though, that given the option, I would have voted for Sir Stirling Moss, for being a legend and making a great comment when asked what Webber should do after having the front wing taken off him. Stirling said something along the lines of, just get on with it and beat his team mate anyway. Paraphrasing - "Always good to beat the bloke that has better equipment!" When Webber won the race, Stirling made a point of shaking Webber's hand after he'd presented Lewis with the 2nd place trophy...

As Sir Stirling is not on the list, I've voted for Sutil...