Pre-Season Your 2019 Predictions for the year ahead.

1. Races will happen.
2. Some will be good.
3. Some will be bad.
4. I won't be able to watch any of them without paying a fortunte/internet/satellite dish shenanigans, and I've better things to do than that. So F1 will have lost a viewer, just like MotoGP did from me when it went behind a pay wall.
Click to expand

If you're in the UK you can watch the highlights on Channel 4, that's the F1 coverage I am going to be seeing this year.

Paddy Lowe will be kicked out before Aussie GP
I

Radical F1 said:
Paddy Lowe will be kicked out before Aussie GP
Click to expand

He didn't go on vacation, unless he was the one asking for time out to sort out his own thoughts about his future. Actually I thought he is out alreday.

Team is busy with catching up with car development, and they do need every able body at work.

Contributor
Here’s my predictions for the season which mostly will be wrong but here goes,

Hamilton to win the WDC by over 75 points but say it was his hardest season ever,
Mercedes to win the WCC by over 100 points and say it was there most difficult season ever,
Bottas will be replaced by Ocon at the end of the season.
Vettel will have a meltdown mid season due to Charles le Clerc,
Charles leclerc will be really inconsistent,
Verstappen gets knocked spark out after threatening some one.
Gasly will be brilliant at Bahrain but rubbish elsewhere,
Red Bull’s relationship with Honda will turn sour by Free practice 2 in Australia,
Daniel Ricciardo will keep smiling,
Hulkenberg won’t get on the podium,
Sergio Perez will get a podium when a race is all mixed up, it will either be at Azerbaijan,Monaco or Singapore,
Lance Stroll will be given a job for life a Racing point.
Antonio Giovinazzi will be replaced by Marcus Ericsson,
Kimi Räikkönen won’t give a damn.
Every time some mentions Alex Albon he will be British born first and Thai 2nd
Torpedo Kyvat will prove why he doesn’t deserve a drive in F1
Sainz jnr will be wasted at McLaren,
Lando Norris will have a promising start to the season then fade away by Canada.
George Russell will be the break out driver of the season even though Williams will be crap.
Kubica will retire at he end of the season.
Last edited: Mar 8, 2019
I

Contributor
Johnny Carwash meet Izumi he's a big Vettel fan and is picking on a typo because you predicted him to do badly.
I

Yeah, I live for revenge.

Contributor
Sorry Johnny Carwash but I think that your last prediction will happen much earlier than that, alas. 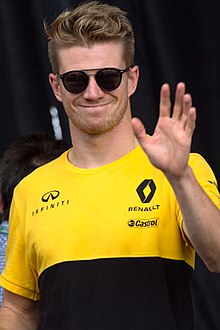 Must be the other one. The guy in the picture is definitely not Hulkenburg.
Last edited: Mar 8, 2019

Izumi said:
Must be the other one. The guy in the picture is definitely not Hulkenburg.
Click to expand

please tell me you dont mean hülkenburg
I

OK, to please you, I don't mean hülkenburg.

Izumi said:
OK, to please you, I don't mean hülkenburg.
Click to expand

phew because that would have been pettiness on scale a huge scale. as whether its hülkenburg or hulkenburg. we all know who we are talking about. F1 or WEC have never used it
I

F1Brits_90 said:
phew because that would have been pettiness on scale a huge scale. as whether its hülkenburg or hulkenburg. we all know who we are talking about. F1 or WEC have never used it
Click to expand

Contributor
You forgot to our the smug face emoji on the end of that post.

Izumi said:
My memory is not that good anymore, but what would Hamilton say if Bottas should win? Wasn't there a case with Rosberg when he won and Hamilton reacted simply by going straight to friendly media, and declared that Totto was probably sabotaging his efforts or something to that effect. He really made a scene of it. (I am actually suspicious that Torger hasn't stop apologizing for that to this very day, promising I will not do it ever in the future again.)

Bottas was asked what plans he has for this season, and he responded, that he will do his best, that's his goal.
Le Clerc in contrast said - I want to win at least 2 races, and soon.

It's good to have measurable target. At least Vettel knows what's in pipes for him.
Click to expand

Just looking back on the thread in order to spellcheck all the names mentioned - wondering who you meant in this post? It's important to the functioning of the internet that all is correct.
I

True, my error. Leclerc and Toto should have been written instead my sloppy typing. Internet now can function again.

im hoping to give you benefit of doubt & say that it was an attempt at humour with because no emojis & tone of internet. it has gone over peoples head. no problem with that. as i done that hundreds of times. but know your surrounding & don't flog a dead horse

but you were serious, get a grip. because that is pettiness that i no intention of dealing with. do i have to call senna, Ayrton senna da Silva or Kimi, Kimi-Matias Räikkönen. this is not mensa this motorsport forum 99.99999% have never had a problem. hulkenburg has never had a problem check the timing screen in Australia when hes on a flying lap