Supporter
I'm really having quite a bit of difficulty wrapping my head around this "test".

If Pirelli have already decided on a plan of action going forward (post-Germany), which is to combine 2012 construction techniques with 2013 synthetic rubber compounds, then the aim of this oncoming test is not entirely clear. They are not searching for answers or direction, as they've already plotted their course.

I see this as a rather transparent attempt by the FIA to retroactively punish Mercedes for using their own delegates and lawyers against them. It also smacks of appeasement towards those that vociferously claimed foul play when it became clear they had been completely outfoxed and outwitted.

Perhaps most astoundingly, two teams that fought tooth and nail to ensure that Pirelli did not return to symmetrical Kevlar based tires earlier in the season were leading the charge to transform the YDT into what is essentially a Pre-Season test, as they will be evaluating an amalgamation of 2012/13 Pirelli's.

As disturbing as it may be, this "test" being run under the guise of safety is nothing more than the proverbial "settling of the score". If the FIA feel they need to compensate for a situation completely of their own making in Barcelona, then they should come up with something a little less obvious than this.

Nicely put KekeTheKing. Had difficulty getting my head round this nonsense test, thanks to your post I now know why!

Supporter
Thanks Fender. I'm certain not everyone will agree with my hypothesis, but the giddy-ness with which Ferrari just announced that they will (of course) be sending Alonso and Massa to the "test" shouldn't surprise anyone.

Following this "test", Massa will have spent more time testing THIS SEASON than all of the "Young Driver's" combined, probably since the introduction of the testing ban.

Contributor
I think that is fairly standard for F1. It's not me 'guv has long ruled!

Surely Mercedes should be allowed to join in on the last day? Firstly, their test was three days not four and secondly, on safety grounds, they've been affected too

Supporter
As for the "test", I can understand why those within range of Silverstone wouldn't give two hoots who was running. 15 pounds for a days worth of F1 is a pretty sweet deal.

And with the "test" modifications, the whole thing is a pretty sweet deal for everyone in F1. Minus one outfit of course....

Contributor
Looks like the forth day won't happen. Which equalises the Mercedes penalty somewhat. 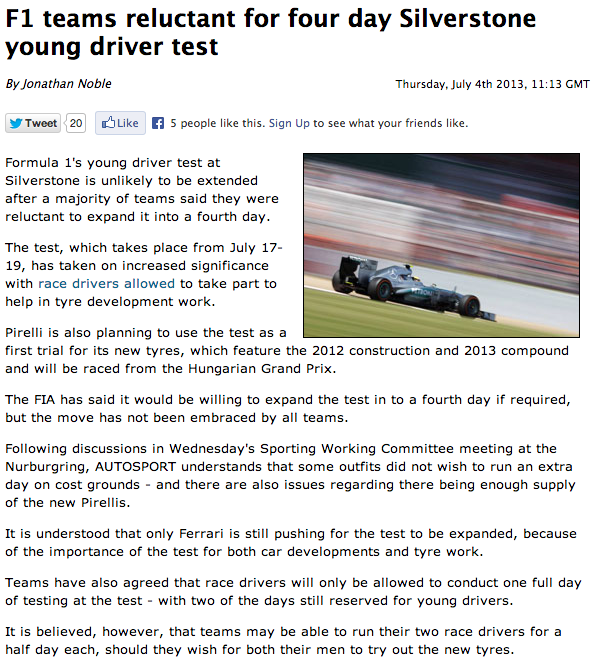 Supporter
Another change in format.

A spokesman for the governing body told AUTOSPORT: "We can confirm that, as only one specification of tyre will be available for the test, it will not be necessary for the teams to satisfy us that race drivers are taking part for the sole purpose of testing tyres for the appointed tyre supplier."
Click to expand

Is that legal speak for "your drivers can test anything you like" ?

Supporter
You'd have to ask that "spokesperson for the governing body" I guess.

This story is really just getting warmed up, and I stick to my original premise that it is has become little more than an attempt by the FIA to appease some aggrieved parties. Especially when we consider that Pirelli's tires are indeed safe and that the root problem was the extreme misuse of the rubber they were providing.

This is quite clearly NOT a safety test. It is a development test for the brand new tires to be used for the remainder of the season.

All the teams should be banned from the test since they've been abusing the tyres for decades. Oh, except for the newbie minnows who didn't know any better

Contributor
Is it really okay for the FIA to take away time in the car from the young drivers to appease the teams over testgate?

Couldn't a separate test have been organised for this purpose...?

Hang on a cotton picking moment I do believe I've asked a sensible question there.....

Not in my book it isn't. To "take away time in the car from the young drivers" that is

... not your question Mephistopheles

Contributor
I understand that the FIA tried to give it back by adding a fourth day but it seems the teams don't want to take this option up due to cost, in which case seeing as the whole mess was partly the FIA fault maybe they should fund the extra day and charge Pirelli and Mercedes for a portion of that cost...

Except that Pirelli failing to understand how F1 works and didn't make tyres fit for purpose was not Mercedes fault. Changing the YDT test is about dealing with the tyres and not about Test-gate.
M

Contributor
I bow to your great wisdom Fenderman...