Race Winner · From Toronto, ON
D

Have only just finished watching it. Thought it was a pretty cruddy race really, although not without entertainment, but most of the interesting bits were mistakes, unnecessary crashes and bad luck.

On the bright side teams I support benefitted from the errors, but the down side is that Verstappen's (and to some extent Ricciardo's) immaturity has transformed what was almost a three way title race into a definite two way race.

It does seem as if the design of the circuit forces oddly unprofessional mishaps.

Contributor
Agree dinsdale about the incidents mostly being negative, and a circuit that forces oddly unprofessional mishaps is fine by me – the track has really grown on me. The long straight provides overtaking opportunities that don't require DRS, and the tweaky windy conditions seemed to catch drivers out in ways that don't happen elsewhere. I like the variety, and over time there should be a reduction in unnecessary first lap drama. Verstappen's first pass on Ricciardo and some of their duelling was fantastic, and Vettel's mistake at the end although not positive for him was a highlight for it's excitement I thought.

I agree you are up for criticism whatever you do.

The only difference between the two scenarios is that if BOT went for it in Bahrain then even if he overshot his breaking he would still have been 2nd (barring a crash). Clearly VET lost more positions as a result of going in way too hot.
D

After Baku Verstappen will be working on zigging but not zagging, while Grosjean'll be practing mindful zig-zagging.

Valued Member
I’d be shocked if he was working on anything.

Contributor
BBC poll of who was to blame.
Formula 1: What happens when team-mates collide? 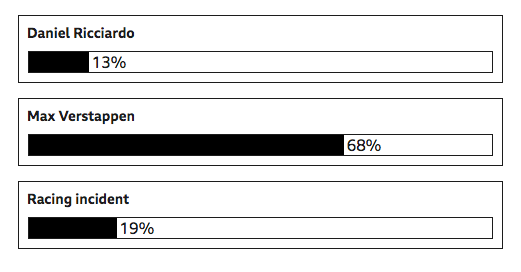