Worthy of the name?

Staff Member
Premium Contributor
I was thinking yesterday of the number of tracks that have corners named after famous drivers (mostly from the world of F1 but some others as well). Of these corners and in some cases straights, are there any that are actually worthy of the name of the driver that they hold? After Senna's death in 1994 there was a rush to label a number of curves at various Tilkedromes through out the world as the "Senna S".

Every track should have a good number of corners that are more than just changing direction of the circuit but present a racing challenge to the driver (Eau Rouge being the classic example).

Well the most aptly-named of all of all have to be the original Senna Esses at Interlagos, not just because it was his hometown but also because he actually had a hand in designing them when the new track sections were being conceived before 1990.

EDIT Incidentally he didn't do too bad a job did he? It's strange actually but that's something that's gone a bit forgotten when we all look forward to the Brazilian GP and the of the quality of on-track battles there. Ayrton designed that first corner, scene of so many drivers attacking each other there!
Last edited: 19 September 2013

Staff Member
Premium Contributor
That's a good shout. As far as I'm concerned they make up the best first corner in F1. The down hill left hander into the right hander. The change of camber, the way it drops away, the whole deal. I would definately say they are worthy of the drivers name.

Contributor
Unfortunately it might not be the first corner from next year, as there is talk of moving the pits and startline to the (current) back straight.

Staff Member
Premium Contributor
I know and I for one am not happy about that but that's F1 for you. If it ain't broke, break it.

Valued Member
To be fair mjo, I'd imagine Descida do Lago would be a chaotic Turn One itself, and Curva du Sol/Senna 'S' would still be an excellent overtaking area. That pit entry is quite bonkers and Hermann Tilke was not involved!

Valued Member
I wondered if you could name Yeongam in tune with these principles... 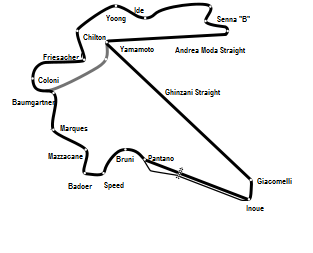 I think it works.
M

Incubus said:
Well the most aptly-named of all of all have to be the original Senna Esses at Interlagos, not just because it was his hometown but also because he actually had a hand in designing them when the new track sections were being conceived before 1990.

I believe that Micheal Schumacher designed the final chicane at he Nurburgring I don't know if it is named after him though..
M

Valued Member
That is known as the Schumacher-S, isn't it?

how can anyone forget where this week's race ithe infamous Piquet corner! the place where Nelsinho crashed