Poll The Worst Year or Era of F1 Dominance

cider_and_toast said:
F1Brits_90 was right, drivers of different abilities should still be able to race each other.

If you go back to the 60's 99 percent of teams had second rate drivers to back their star driver up anyway so that's nothing new. If you look at Lotus as a classice example, apart from the super team of Clark and Hill, some of the second seats at Lotus belonged to Alan Stacey, Eppie Weitz, Reine Wessel, Dave Charlton and John Miles. Most people would have never heard of most, if at all any of them.
Click to expand

Il_leone said:
You meant Silverstone 2011 Webber was clearly faster than Vettel but they told him to stop racing Vettel even though Vettel had a huge lead in the championship

I think what will make this period of domination quite the worst has been Red Bull's conduct since last season with various influencing Masi decisions and clearly Abu Dhabi but off course they aint going to take the title away from Max. The worst one was Silverstone trying to imply that Hamilton should be DQed even though you cant argue that a decision made against the incident but it got more and more nasty with the accusations and desperate measures what is illegal on the Mercedes car

Before the Abu Dhadi report came out about last season they were trying to distance themselves and pretend they were the innocent victims that they did not cost Masi his job. Then continually mocking Mercedes as well as argiung about missing races if they did not get a budget cap raise. Basically theyve acted like w@nkers and worse created this anti Hamilton / Mercedes brigade.
Last edited: 6 September 2022

siffert_fan said:
What about Russia in 2018?
Click to expand

You mean 2019 ?Vettel was stupid and it cost him his drive seeing Leclerc was the only one with a shot at the drivers title.

Il_leone said:
You mean 2019 ?Vettel was stupid and it cost him his drive seeing Leclerc was the only one with a shot at the drivers title.
Click to expand

No, I mean 2018 when Bottas was ordered to let Hamilton win. How is that different?

Fittipaldi ran a third Lotus car in 1970 and took over as the team leader in 71. Hardly what you'd call a second driver. Peterson was quick and Rindt was always going to replace Hill at Lotus.

All of that is besides the point though, until they changed the scoring system so that both cars scored constructors points, most teams including the front runners had a clear team leader and a clear number 2. This went on well in to the 80's. Nelson Piquet won the 1981 title with Hector Rebaque as his team mate for example. Senna raced alongside Johnny Dumfries.

siffert_fan said:
No, I mean 2018 when Bottas was ordered to let Hamilton win. How is that different?
Click to expand

well that was because Bottas was holding Hamilton up & was in danger of being overtaken by Vettel. so they needed to let him go for championship

siffert_fan said:
No, I mean 2018 when Bottas was ordered to let Hamilton win. How is that different?
Click to expand

siffert_fan said:
What is the difference in "not letting the drivers race" and having one top-tier driver and one second-tier? The latter has no chance against the former.
Click to expand

Kimi Raikkonen went from a top tier driver to a second tier driver at Ferrari because they would not let him race Vettel. It actually masked just how uncompetitive Ferrari were in that although some say Vettel made Ferrari look better than they were.
Did Rakkonen have a chance against Vettel in some seasons he was closer but he had to defer or be put on a duffed strategy to make sure he was in Vettel's way or used as his blocker

Anyone care to speak about the Merc era of domination?

Just the number of teams winning doesn't tell that much.

In 2007 Ferrari and McLaren split wins. Ferrari won 9 and McLaren 8. Of course there was controversy with the spygate and so on, but overall a very tight season.

In 2020 four teams won races but Mercedes won 13 out of 17. Red Bull had two, AlphaTauri and Racing Point won one each.

breaking the 13 races record seems to be a bit pointless, because like in McLaren era there was only 16 races & Verstappen winning 14 races is the same as when mclaren winning 10 in 1988. so i was looking at the stats to take the all-time % record Verstappen would need to win all the races remaining & to take modern record he needs to win 5 of the next 6. to overtake Schumacher in 2004. also, in the other picture. its quite surprising also that only 9 drivers have won 5 consecutive races & if he wins in Singapore he will become only the 5th driver to have won 6 in a row 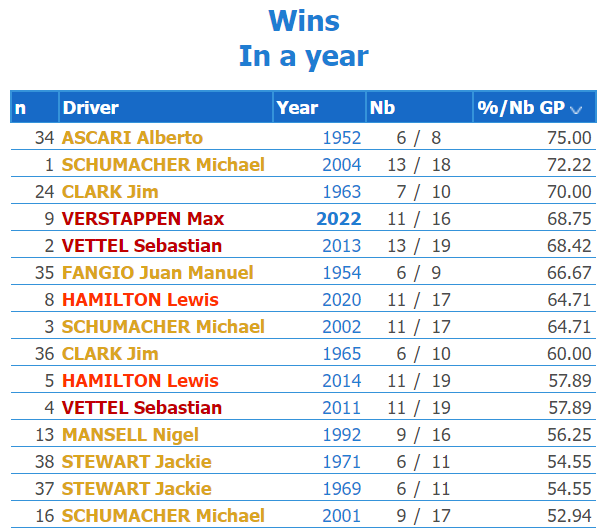 F1Brits_90 said:
breaking the 13 races record seems to be a bit pointless, because like in McLaren era there was only 16 races & Verstappen winning 14 races is the same as when mclaren winning 10 in 1988. so i was looking at the stats to take the all-time % record Verstappen would need to win all the races remaining & to take modern record he needs to win 5 of the next 6. to overtake Schumacher in 2004. also, in the other picture. its quite surprising also that only 9 drivers have won 5 consecutive races & if he wins in Singapore he will become only the 5th driver to have won 6 in a row

Ascari was down as winning 9 in a row

Contributor
This is the worst year ever. 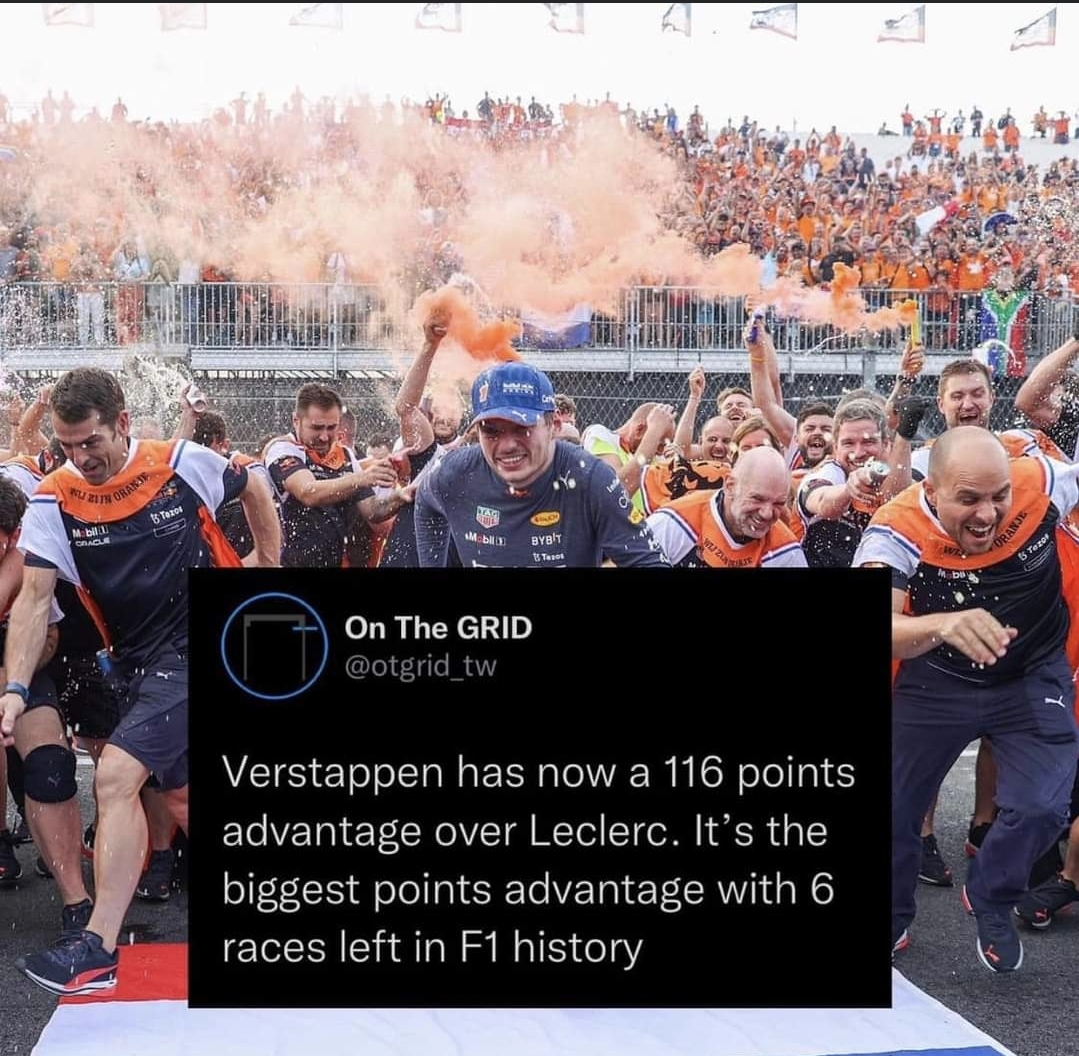 Greenlantern101 said:
This is the worst year ever.
View attachment 15937
Click to expand

have been asking Perez to move out of the way

Greenlantern101 said:
This is the worst year ever.
View attachment 15937
Click to expand

depends though, as 25 pts to 10pts change can skew things like 2004 i could imagine being bigger. as that was the most dominant year in my opinion

F1Brits_90 said:
depends though, as 25 pts to 10pts change can skew things like 2004 i could imagine being bigger. as that was the most dominant year in my opinion
Click to expand

cider_and_toast said:
One of the reasons I give 1988 a hall pass is because Senna and Prost spent the whole season kicking lumps out of each other.
Click to expand

I also give 1988 a “hall pass.” Rather than the “worst” season of team domination I would characterize it as the most intriguing, fascinating and exciting one. It might be expected that the most team dominated season in F1 history would have been boring and unenjoyable for all except fans of McLaren and its two drivers. However, thanks to certain elements this wasn’t the case. One such element was the new driver pairing of Senna and Prost. The overwhelming consensus at the time was that these two were easily the best drivers and would likely become rated among the best ever (in my opinion, this was the strongest pairing ever in F1). I remember the giddy pre-season anticipation as the F1 world eagerly awaited the clash between these two elite drivers in the same machinery—would the more recently arrived Senna (for the first time in a true title contending car) be able to dethrone the more established Prost? The fact that these two were so clearly the best strangely diminished the down side of the car’s dominance and the reality that the title fight would be only between these teammates. I think people kind of perceived that, even in a situation with all things being equal, these two would beat all the others and the title battle would ultimately be between them anyway—sort of like the two top tennis players working through the preliminary rounds and squaring off in the final round of a tournament. The other key element was McLaren’s policy of providing equal machinery to each driver (this included strict alternating use of the spare car) and, most significantly, allowing the drivers to race each other (they really had no choice in the latter if they wanted to have these two elite drivers since neither would have accepted no. 2 status).

The title battle was riveting and incredibly intense with tension progressively brewing under the surface between these two which would erupt into outright acrimony the following season. With one of the great drives in F1, the title was finally clinched by Senna in the penultimate round in a thrilling race in Japan (Suzuka). As usual, Senna took pole but badly bogged down at the start, falling back into the pack to 14th, while Prost seized the lead. Senna then engaged in an amazing comeback charge through the field. Further excitement was added by intermittent periods of light rain—too light for rain tires but enough to dampen the track and make it treacherous. Senna used his uncanny wet weather skills during these periods to make big gains and eventually caught Prost (who was experiencing some slight shifting issues). Senna dogged Prost until finally passing him (lap 27) with an on the edge move into turn one (the rear of his car briefly stepping out). Senna steadily extended his lead but the excitement wasn’t yet over. The spritzing rain fell increasingly more heavily over the final laps, still not enough for rain tires but visibly dampening the track, making it even more treacherous for the slick shod cars. Would Senna be able to keep it on the road on this fast, twisty circuit and avoid making a mistake that would allow Prost into the lead? Yes—Senna masterfully negotiated the conditions (increasing his lead over Prost) and took the win and title. I attended the Canadian GP that season and the battle between these two made the atmosphere there even more electric. Among the crowd there were numerous good natured discussions/arguments between the fans of both drivers over which one was better and who would win the title. I’ve been following F1 since the 1960s and, for me, 1988 remains one of the most memorable seasons, despite the severe domination.

I am not expecting Verstapoen and Red Bull to dominate in 2023 if Mercedes get the car right..the question will be be if Hamilton and Russell take points off each other or not

Il_leone said:
2002 was more dominant I feel
Click to expand

i was going on that season started from 7th march it wasn't until Belgium on 29th august that he didnt see the chequered flag 1st. as he had won 12 of the 1st 13 races. have retired under safety car in monaco

The worst driver in F1 History
3 4