The worst driver in F1 History

Contributor
I'd wiped Yoong from my memory!

Il_leone said:
Murray Walker use to back Pedro Diniz up by saying he was not as bad as people make him out to be and certainly not just a pay driver.
I just checked he actually outscored Jean Alesi in 1999 ! Yes Jean Alesi and scored as many points as Mika Salo in 1998
Click to expand

I think this backs up my post about Alesi being overrated.

You gotta be bad to be slower than Mark Webber...

Valued Member
Some of these performances look even worse in hindsight.

Zsolt Baumgartner and Gaston Mazzacane narrowly missed out on the 2000s list, as did Nelsinho Piquet.

Pedro Diniz was nowhere near bad enough for the 1990s list.

Contributor
Also without Pedro we would not have had this 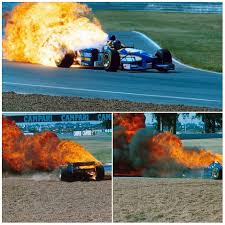 Which led to the brilliant headline of "Diniz in the oven"

the maddest thing about Alex Yoong that in A1GP. a series where his rivals was Hulkenberg, Enge, Buemi, Hinchcliffe, Lapierre & Bleekemolen. he won 3 races & finished 5th

Galahad Should Nelsinho get a mention in this thread then? We know the reasons why now and clearly a victim of Flav's driver management to massage Alonso's ego

I will defend both Pizzonia and Zonta because their teammates were a$$ holes and thought they were world beaters. In doing so both these guys were potentially psychologically damaged by their experiences.

Pantano - another driver who 's promising career stalled . Flav helped him out initially but then wanted his 25% fee if he is to go further. The Jordan drive was not good because the team were in a mess thanks to Ford's late decision to pull out. Heidfeld's career could have ended after being dropped by Sauber whilst Pantano was bringing in money to the team just to pay Heidfeld's wages but it also took a toll on his family to remortgage

Yoong - clearly not ready for F1

I think there are enough extenuating circumstances for the others to move Max up to #1 on this list, but hey, these are the numbers, do with them what you will.