The History Of Turbos in F1

Contributor
Full documentary on F1 engines and Turbos.
Worth watching just for the noise.

Contributor
And how it sometimes ended..

Really interesting how Cosworth were so aimlessly floundering in their initial research. Seems just a smidgen of spy work would have paid a HUGE dividend.

I really found it amusing when they proclaimed the L-4's vibration problem unsolvable (except by applying a BMW badge to the valve covers) and Keith Duckworth himself said they were switching to the V-6 configuration ...because a lot of successful teams were using it. Which puts me in mind me of a war story.

The MiG Soviet aircraft bureau were having kittens developing the MiG 23 fighter jet. Transonic shock wave transiting the engine intakes was causing compressor stall. And rather than spending hard-won ruples to engineer their own solution, they simply picked an existing successful design to mimic, in this case, the one used by McDonnell-Douglas on the F4 Phantom II. 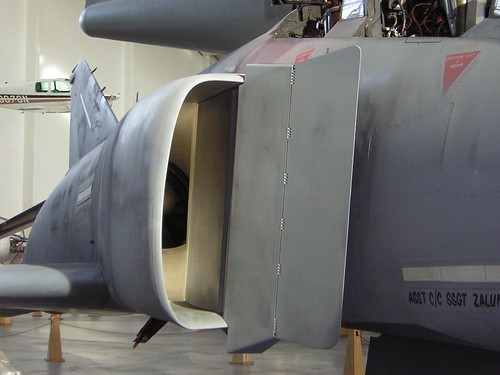 But they didn't just copy the adjustable 'ramp,' they also copied a feature behind the ramp, where the leading edge of the engine nacelle joins to the fuselage. They weren't sure what the feature did, but they knew M-D would never have included it if it weren't essential, so they put it on the MiG-23, too.

The mystery feature was a wire cutter formed by a pair of converging hacksaw blades, teeth facing inwards, flanking the gap between the nacelle and the fuselage. Its purpose was to prevent the back seat operator being entrapped in the event the pilot missed all the arresting gear's 'wires' when shooting an aircraft carrier landing, causing the a/c came to rest in the (last chance) catch net. The top cable of which otherwise could slide along the top of the fuselage, pinning the rear canopy closed, trapping the WSO inside.

Except that neither the Soviets nor any of the MiG-23's projected client nations had even one aircraft carrier. But the MiG-23 has cable cutters nonetheless. So let's switch to the V-6, because most of the guys we're trying to catch up are using it.


Not to pick nits but I also found it amusing they chose to title the video in the OP, "How it all started...", which is pretty Anglo-centric, when you consider Renault already had been racing a turbo engine for seven seasons before featured team -- Cosworth -- ever got started.
Last edited: 7 November 2013

Er... Mephistopheles , that clip of yours features the blow-up of a normally-aspirated engine in 11990, some two years after turbo engines were banned.

Contributor
I thought as much Incubus but I couldn't find a turbo blowup and so I just posted any old blowup to make a point that they did blow and quite often, I seem to remember that when they did it was far more spectacular than that I'll see if I can find a real one...

Ah, the age old problem ... where to find a decent inflatable when you need one.

Oh, oh, not the boob enhancement thread is it? Sorry.

Mephistopheles said:
I thought as much Incubus but I couldn't find a turbo blowup and so I just posted any old blowup to make a point that they did blow and quite often, I seem to remember that when they did it was far more spectacular than that I'll see if I can find a real one...
Click to expand

When the turbo cars let loose, the entire car simply disappeared in a puff of smoke, leaving no trace, except in a couple of instances. One Macca went off at Suzuka, and after a tear-away could be seen fluttering to ground. And a Lotus did similar at Silverstone, after which the driver's lucky rabbit's foot was found still smouldering in the car park of St. Michael's church. Some said it was because the Pu-239 they had added to the fuel had come out of solution and settled to the bottom of the tank, achieving critical mass in the doing. Others said it was the whole pesky E=MC^2 thing, and the cars likely would be found near Perth in the year 2027.

It's just a theory, but it explains why there's no pictures.