Contributor
This is a continuation of the “Development Race” article I made around this time last year looking at the performance of the teams both in the races and in qualifying from 2008 to 2012. I have now had a look at 2013 and updated the results and graphs etc. For those of you that haven’t seen (or forgotten about) the previous article I will write a summary of what this is all about and what I’ve done, but you’ll find more details if you look back at the original post (or just ask me here if you don’t understand something).

The basic idea is to look at how the competitiveness of the teams changes during the season and/or how it has changed from season to season. We probably all have a feeling for the ebbs and flows of a season but it is easy to miss something and it is interesting to put numbers on questions like “just how far back to McLaren drop in 2013?”.

To do this I look at both qualifying and the races in different ways, as follows:

Qualifying: The fastest time set by either of a team’s driver in a dry qualifying session, to give an indication of the ultimate raw pace of the car.

Race: The combined total points score for both drivers in a team in both wet and dry races, to look at the overall performance of the team taking in to account all factors (reliability, driver errors, strategy etc. etc.).

The qualifying results for me are the most interesting so I’ll start here again. First of all though I will add a little caveat about the accuracy of the stats. In 2013 there were quite a few wet qualifying sessions and this means that only two and a bit races count towards the 1st and 2nd quarter results. This means that in some cases the results are quite sensitive to an unusually poor qualifying for a team or strategic decisions to compromise Q3 for a better race strategy.

One example of this is Red Bull, who pop out as only the third fastest team in qualifying trim in the first quarter of the season using this approach. They didn’t have the fastest car in qualifying trim at the start of the season but they were probably faster than Ferrari and they are hurt by Webber’s refueling issue and Vettel’s decision not to set a time in Q3 in China. Nevertheless, the overall picture is the correct and familiar one – they improve in every quarter and by the end of the year they have a huge advantage – an average of eight tenths to their nearest rivals!
Another factor to possibly consider when looking at Red Bull’s rise to the top is the move back to the 2012 spec Pirelli tyres, which happened after the second quarter. It’s difficult to say how significant it was, but we can see that Williams (5 tenths) and Sauber (7 tenths) gained significantly around this time, whereas Force India fell back a couple of tenths. At the front there’s a half second swing between Red Bull and Mercedes. It does seem that the midfield teams that were strong in 2012 (Williams and Sauber) gained around the time of the tyre change but there’s a lot of other factors at play. There was a lot of speculation about how Red Bull could unlock extra potential
in their car with the 2012 tyres but just how large a role it played is very difficult to say.

I’ve mentioned them once or twice already but, building on a promising start to 2012 and with the added impetus of Hamilton’s arrival, Mercedes were the biggest gainers of 2013 and in fact for the first half of the season had the fastest car on Saturdays. They fall behind the relentless bull later but always maintain the edge on Ferrari and Lotus. Ferrari and Lotus themselves have a pretty close battle for 3rd, with Lotus having the edge after the start of the season.

In the midfield I have already mentioned the reversed fortunes of Sauber and Force India at the start/end of the season – Sauber propel themselves to within half a tenth of Ferrari whereas Force India slide all the way down to the back of the midfield after a promising start. Williams start way back, 8 tenths off the nearest midfield team, but do eventually claw themselves back in to contention with Force India and Toro Rosso (who were not worst of the established teams for a change) at least. That leaves one big name I haven’t mentioned yet – McLaren. They completely cocked up their new car, ended up in the midfield and stayed there, that’s all there really is to say.

Finally, a quick note about the bottom feeders. Marussia had probably their most competitive year so far and matched Caterham at the beginning and end of the season, which was enough for them to steal 10th in the constructors. Neither of them got close to challenging a “proper” team however, and if that doesn’t happen in 2014 you have to wonder whether it ever will.

RACE RESULTS AND COMPARISON WITH QUALIFYING:

I’ll keep this short as we’ve covered pretty much everything in the qualifying section. The race stats, and the graph in particular, do make Red Bull’s advantage as the best overall package (if not always the best qualifying package) across the whole season apparent. As well known, Mercedes were generally much less competitive in the races than qualifying and often fell behind Lotuses/Ferraris. Perhaps in contrast to general opinion, Ferrari appear to have had a better race car than Lotus as although Lotus had the edge in qualifying, Ferrari brought home more points (the Alonso factor maybe). In the midfield Toro Rosso tended to fall back in the races whereas Force India moved up the grid, probably thanks to some Red Bull seat winning performances from Ricciardo on Saturdays and on the other hand quite a few cock ups on Saturdays from Force India.

Below are updated graphs and tables containing all the data from 2008. I will only talk about 2013 here as you can find information about everything up to 2012 in the original article.

For me personally these tables and plots have just too much going on in them to make out any trends but if you want to see all the data in one place it’s here! 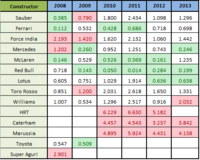 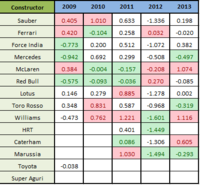 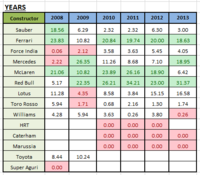 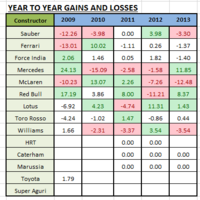 Let’s start with the two very apparent upwards spikes in qualifying in 2013 belonging to Williams and McLaren, who both lose over a second per lap on average in qualifying compared to their 2012 cars. Williams have seen such large swings from year to year pretty consistently over the whole six year period, losing or gaining between 0.5s and 1.6s each year, but for McLaren it really is astounding. They move from years of consistent progress since 2009 culminating in being the fastest car on average in 2012, to a lowly 5th and only just about at the front of the midfield. In fact, they lose almost three times as much as they did (on average at least) between 2008 and the new regulations coming in in 2009!

At the other end of the spectrum we have Mercedes who, after the complete shake-up and restructuring caused by changing from Honda to Brawn to Mercedes, have been striding forwards in leaps and bounds since 2011. They have gained half a second to the front runners in each of the previous two seasons now and for 2013 end up just a fraction behind Red Bull on Saturdays. They were even closer to pole on average than they were in their dominant year as Brawn in 2009, although at no point did they have the best race car.

By gaining three tenths Toro Rosso are the only other established team (I’ll talk about the new teams later) who really made any decent moves forward or backward in a year where most teams stood still. I would like to mention Ferrari though who for me might just take the prize of the team with the worst development over the past six years. Yet again in 2013 they just stood still seven tenths back from the front, further behind than they were in 2009/10 at four or five tenths behind. At least McLaren, for example, had the balls to try something new and radical and get it wrong rather than what, from the outside and just looking at the stats at least, seems like a pretty conservative and unimaginative team at Ferrari.

I’ll keep calling them the new teams even though they’ve been around for quite a while now. The simple comment is that Caterham and Marussia still haven’t managed to come close to challenging one of the established teams yet. On average both of them were about two seconds behind Williams in 2013. Marussia, however, have made serious inroads in to Caterham. After Caterham managed to get themselves almost a second and a half in front in 2011, Marussia have reduced the gap to 1.2s in 2012 and then just 0.3s in 2013. They were also closer to the back of the midfield than they have ever been before and gained three tenths on Red Bull compared to 2012. Newey will be losing some sleep over that I’m sure!


The rest of the graphs are just updated averages including 2013. I don’t think the picture changes much so you can just look back at the original article to get my comments on them if you’re interested in what these show: 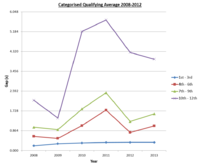 The End! Sorry for the long quadruple post! Thanks to Brogan for the data again, and if you can decipher any of this I'd love to hear your comments! I'm not going to promise to continue this in to 2014 but I think this now gives a good picture of what happened during the 2009 style regulations, and in the last few years of the V8s. It did only take two days this time rather than two months like last year though so chances are I'll be tempted to continue it this time next year!
Last edited: 23 December 2013

Premium Contributor
Great work sushifiesta! Shows how great Merc were on Saturdays and how dire they were on Sundays compared to the other 3 big teams. It also shows that Ferrari are closer to Lotus and Mercedes on Saturdays than is generally perceived, I suspect if Vettel or Hamilton were in the car instead of Alonso we would actually see a few Ferrari poles. Finally look at how good Sauber were at the of the season, from 2nd worst of the established teams to being right on Ferrari's arse is a real achievement for their tech team (aided by the 2012 tyres of course).