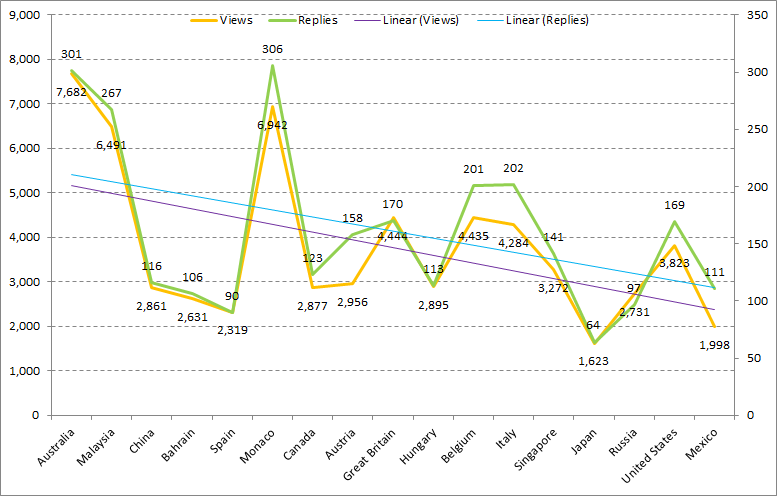 Contributor
Errr, sorry but what is the PQR thread ?

I wonder it it was similar in 2011 when Red Bull crushed the opposition ...

Contributor
It's a fact that this season a lot of the races have been dull, with little to discuss, when they were/are interesting races or controversial then everyone piles in. It has been a one horse season, but that can't last, and McLaren/Honda has to improve sometime.

Olivier said:
I wonder it it was similar in 2011 when Red Bull crushed the opposition ...
Click to expand 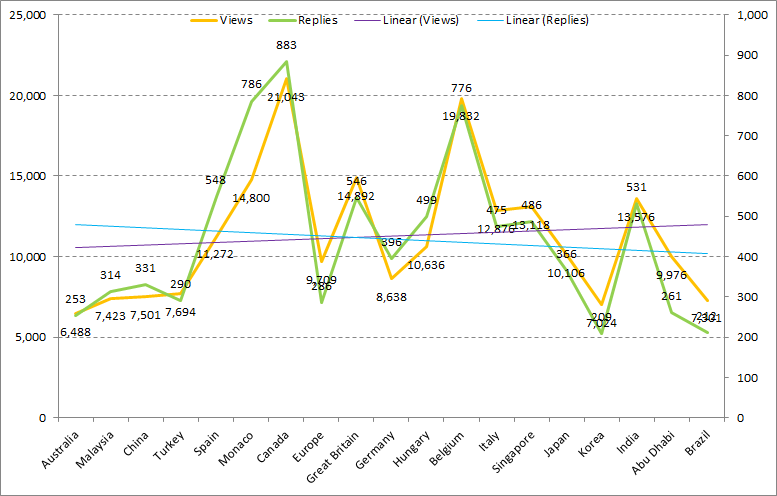 Also, we had ray then

Maybe we should bring him back then?

Or someone just pretend to be him?

Contributor
Being higher up the google search results would bring in more punters.
If you type in F1 forum, you have to go to the 3rd page before CTA shows up.

Staff Member
That's simply due to the lack of activity.

The more activity, the more content, the more backlinks, etc., the higher up a site gets.

Easy Solution then. Let's just have a thread dedicated to repeat posts. A special thread that could be called the irrelevant thread where anyone could post the same random words on fifty successive posts or so.
Traffic would increase tenfold and the site would come much nearer the top off Google search?...

People these days are inundated with information on their devices, without even needing to go to a website; it's the new normal and less people posting/viewing in this (and other) forums is the consequence. There are only 2 f1 forums I check often, this is one of them. The other one is in worse shape, the GP discussion is limited this year to 2-3 pages of comments only (and shrinking).

rufus_mcdufus said:
Or someone just pretend to be him?
Click to expand

I believe he walks among us still.

Contributor
I belong to some other forums as well and they are definitely suffering with lack of traffic. A few years ago they were busy, busy but now hardly anything happens. I don't know what the cause is but maybe it has something to do with the trolls who criticize everything that other people say?

Well maybe you've just the nail on the head there marksawatsky , albeit perhaps not in the way you intended.
You "belong to some other forums as well". "A few years ago they were busy busy"...

How many motorsport forums are there now and how many were there 5 five years ago?

I suspect the rate of increase in the choice of forums over the past 5 years far outweighs that of the fans who would seek to join one. Thus the entire activity on motorsport forums becomes more and more dispersed, especially when posters have ever more choices to jump ship to whenever something or someone upsets them on the forum they're at.

Maybe it's just that we live in an era when the age of the big "corporate" motorsport forum a la 606 is over, and forums are now destined to become smaller and more dispersed in terms of traffic, as I don't believe the number of motorsport fans increases at the same rate as the ease in which anyone can set up their own forum...
Last edited: 6 November 2015

Contributor
The big boom on F1 forums came when 606 shut down and everyone scrabbled for somewhere new to go. On finding the new hallowed ground they realised how much better it was and stuck around for a while before getting bored.

The problem with forums is that 50% of the people who join them want to give their opinion and don't want anyone else to disagree with it. When people do disagree they take it very personal and either huff off or get stuck in a circular argument that becomes personal and puts off other posters.

I'm not 100% innocent of this - everything gets heated - but I fully expect someone to challenge any view I have because this is a forum and people will all have different views. Thats the reason I'm here really to see other people's point of view and think about them. Some of the time I'll think its rubbish and say something about it but a lot of the time it'll make me go away and think about stuff. I get het up when people don't look at things from an objective point of view sometimes its true but I try to understand.

Forum = debate. Far to many people come on them and scream 'Troll' or 'fanboy' just because someone doesn't agree with them. How boring would a forum be if everyone came on and agreed with each other?
Last edited: 7 November 2015

Contributor
People should not be rude or Ill mannered though.