Staff Member
Premium Contributor
I don't think they've had the cash from day 1.

This whole thing is very fishy. The fact they can't get more funding means I'm not the only one who doesn't trust them.

Sad day for land speed record fans.
I hope an investigation is launched by one of their investors. I want to know what happened and who is going to jail.

Staff Member
Premium Contributor
There was a big article on it and its failure in this month's Motorsport magazine which basically pointed out that no one gives a crap about land speed records anymore.

Contributor
I think it's quite simple. This is not like landing on the moon, an asteroid or Mars. It is almost a self-indulgence.
There is no obvious benefit to travelling at the speed of sound on land, it's unnecessary.
There has been no government funding, it's all been private sponsorship or equipment donation/loan.
Although it's a fascinating engineering project I got bored very early on.
Am I disappointed? Yes.
Am I surprised? No.

My daughter was fascinated when she went to the roadshow they did; and it's interesting from an engineering point of view, but...
Somehow, it doesn't feel like a land speed record when you're basically strapping a jet engine or rocket onto a rolling chassis. In my head I feel a land speed record should have driven wheels.

Staff Member
Premium Contributor
And I think the last two posts have captured most people's thoughts on the project most succinctly.

Basically the 1000mph figure was plucked out of thin air as a target. As pointed out in Motorsport, only the US, Britain and a handful of commonwealth countries still use Miles as a figure so for the bulk of the world that figure means nothing.

Staff Member
Premium Contributor
The bloke who bought that has got more money than sense.

If or when the 1000mph barrier is achieved then that is the end of land speed record attempts, even at 1000mph it is debatable whether or not the car is a plane in ground effect and the computers just manage to keep the wheels touching the ground, then if that is the case does it need a driver, or is he there to comply with the rules?

Contributor
If you watch Andy Green in the Thrust SSC he had a full lock tail slide at 600mph trust me he isn't just there for the rule book.
Last edited: 20 December 2018

Greenlantern101 yes, but Thrust SSC is old technology,with todays latest tech the car would be corrected long before a tail slide could develop, just think about the Typhoon fighter jet, that is so unstable it can't be flown by a pilot without micro processor stabilisation.

Contributor
100mph under its own power today 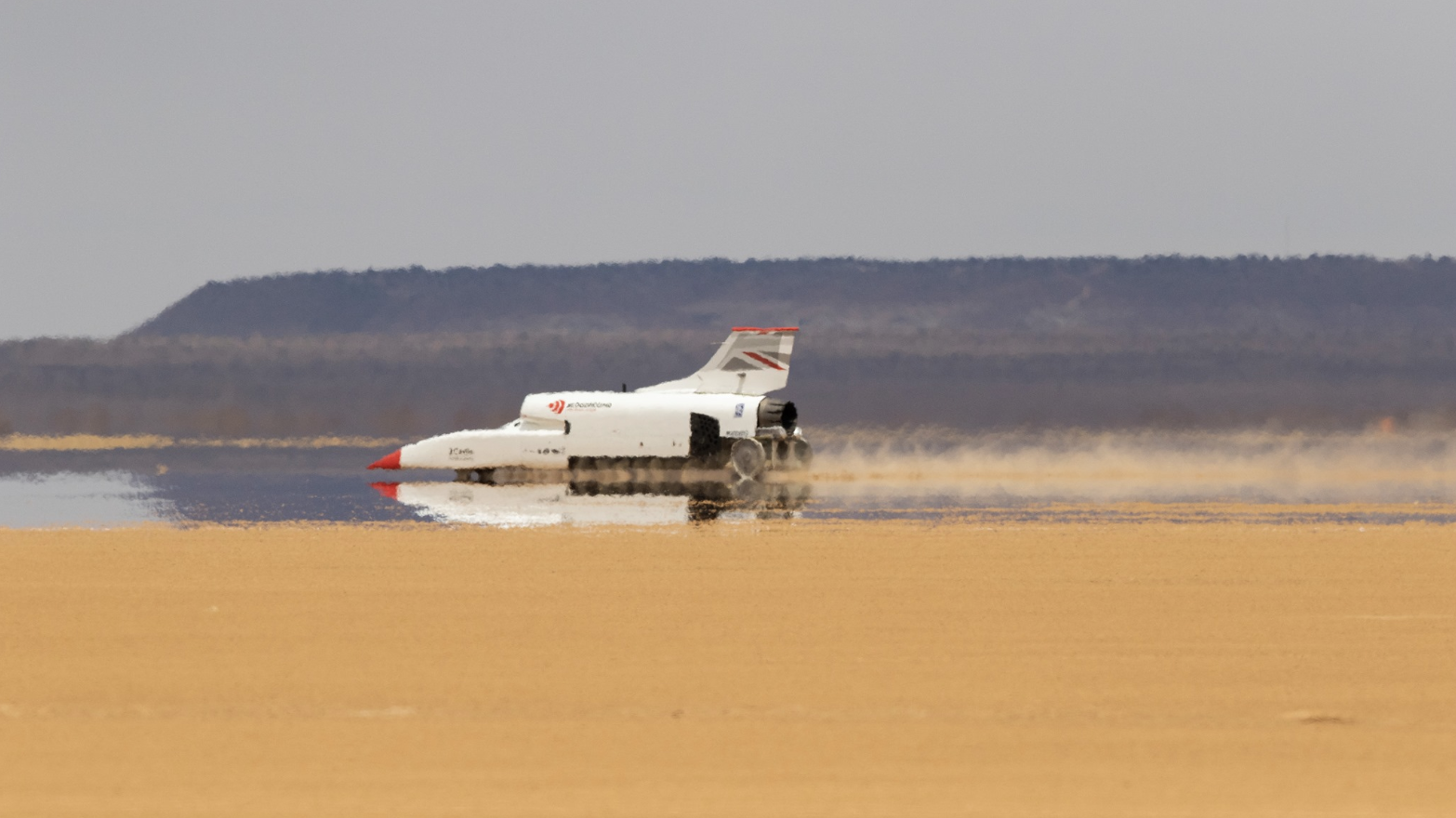 Premium Contributor
Up to 334mph

Contributor
Big twitch. Cross winds on the limit that day.

Valued Member
The company my youngest son works for made the steering rack for that.

Another hugely successful day of testing for the Bloodhound LSR team saw the speedometer swing to 380mph, plus the first deployment of the parachute which slows the car from high speeds.

During ‘Run Profile Four’ the Bloodhound car was started ‘dry’; without injecting the extra fuel for reheat. Once it hit 50mph World Land Speed Record holder Andy Green engaged full reheat (a.k.a afterburners) and piloted the car to 380mph (611kph). It took just 27 seconds, even though Andy lifted off the throttle when it hit 360mph.

Once the car hit the 2km mark Andy cut power completely and pulled Parachute One for the first time ever. The parachute was tugged from its canister by a drogue, a conical shaped device with open ends, which then deployed the full canopy, slowing the car until Andy used the front wheel brakes to bring car to a halt 3.8 miles from the start.

The recovery team - “Rescue 2” - arrived on site within one minute and released the parachute from the car. This is the process the team will use when making record breaking runs in 12 - 18 months’ time. It is crucial to ensure parachutes aren't dragged behind the car when it completes its transit down the length of the track, which is does before turning around ready for a return run within an hour.

An excited Andy Green said: "The video footage shows a clean release of the ‘chute behind the car, just one second after I pulled the release leaver. The engineering team and I are delighted all the hard work designing the deployment system paid off first time"