Contributor
I know why so many of you can't sleep at night, it's because you don't know how many races the leading teams have won at this point in the season since the year before the new regulations (2008)! Well fear not, because I will put to rest any questions you have about this important statistic.

View the beauty of this graph: 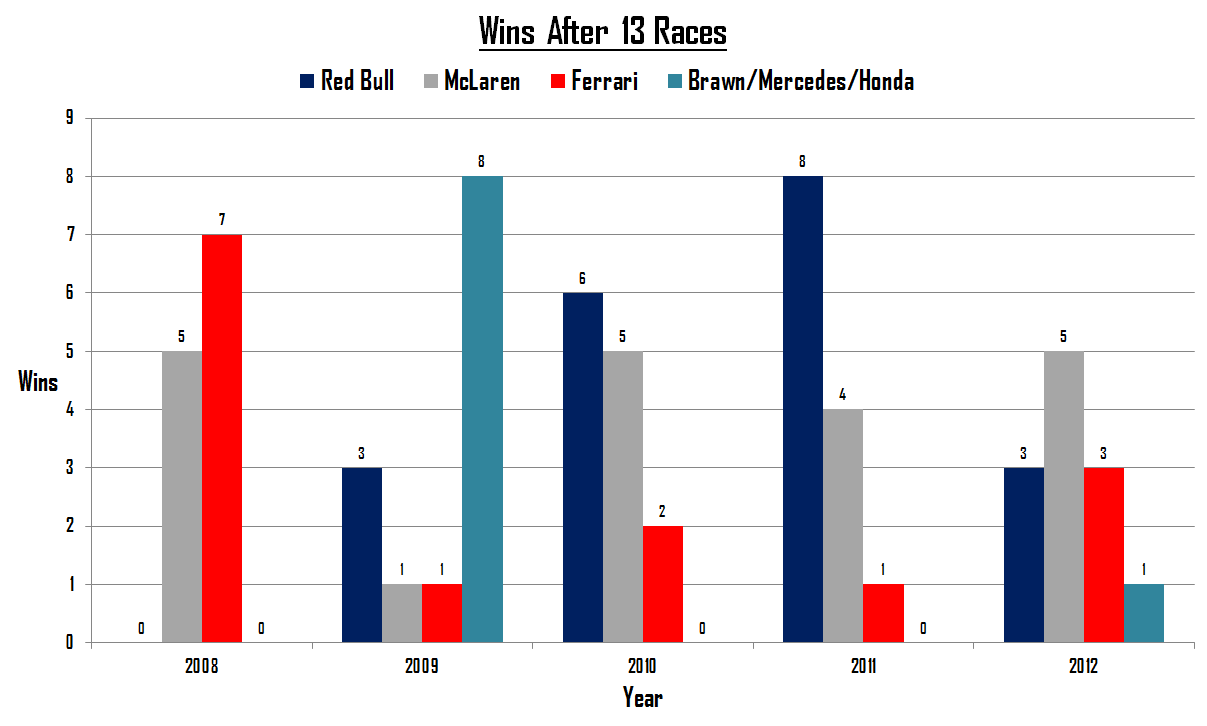 Red Bull, McLaren, Ferrari and Brawn/Mercedes are the four teams that have dominated the sport since 2008. Only two other teams have won a race, BMW Sauber in 2008 and Williams this year (amazingly, Renault/Lotus have not won a race in this period).

Red Bull: Clearly the biggest gainers between 2009 and 2011 as a result of the new regulations for me, as we all know, with the beautiful Newey built cars becoming more and more dominant during that period. Red Bull's downturn this year, in terms of wins, is surprisingly as large as McLaren and Ferrari's was after they struggled to adapt to the new rules in 2009. The others have caught up and Red Bull were seemingly gaining the most from the exhaust blown diffuser.

Honda/Brawn/Mercedes: Brawn put all the financial might of Honda to good work during a dire 2008 season to give them a massive head start over the rest in 2009. Since then massive personnel changes and a lack of finances during the 2009 season meant they couldn't maintain their lead, and they promptly dropped down the order again in 2010. Mercedes ownership is starting to show signs of paying off though, with a return to the top step of the podium in 2012.

McLaren: McLaren went from championship winners in 2008 to near back markers at the start of 2009. However, apart from that it is perhaps surprising how consistent McLaren appear to be, winning 5 of the first 13 races in 2008, 2010 and 2012 and four in 2011. I think there must be some relationship between how fast a McLaren car is and how many errors they make...

Ferrari: In 2008, on this scale, Ferrari were almost as dominant in the first 2/3rds of the season as Brawn were in 2009 and Red Bull in 2011 (but they missed out on the drivers championship, read in to that what you will). Like McLaren, Ferrari were putting resources in to their 2008 car until the end of the season and suffered accordingly in 2009. Unlike McLaren, Ferrari seemed to have struggled to gain back much ground. Having said that, Alonso nearly won the championship in 2010, and they seemed to have found their way with the 2012 car after a terrible start. Alonso making them look better than they are, perhaps, or maybe Massa is making them look worse than they are?


So, after a couple of hours spent on stating the obvious and making a pointless graph; I am going to try and find my sanity. Hopefully one or two of you will find it slightly interesting!

Very interesting. How about a graph of wins after 13 races? I mean if you don't want to waste some more time don't but it would be interesting to see what we could be seeing next!

Contributor
soccerman17 Do you mean wins from the 13th race to the end of the season? I might try something like that if I find the time after this season has finished.

EDIT: I should also point out that my statement about Renault not winning a race in this period only applies to the first 13 races in the season. They won races towards the end of 2008, for example.

Contributor
soccerman17 Well, ask and you shall receive, and much earlier than expected! If I remember I'll create a new thread at the end of the season with updated graphs for the whole of 2012, and I haven't spent so much time making them look pretty, but for now...

What I have done is split each season in to thirds. So, in 2008 there were 18 races, for example. The start of the season is then the first six races, the middle of the season race seven to race twelve, and the end of the season race thirteen to race eighteen. The number of races in the other years doesn't divide nicely by three, so I award fractions of wins to each section of the year accordingly. So far we are one race (well, one third of a race) away from completing the middle third of the season in 2012, so only the start of the 2012 season is shown on the graphs.

The only other thing that has changed is I'm showing the win percentage on the vertical axis to adjust for the different season lengths. Still with me? Good, on to the graphs!

WIN PERCENTAGES AT THE START OF EACH SEASON: 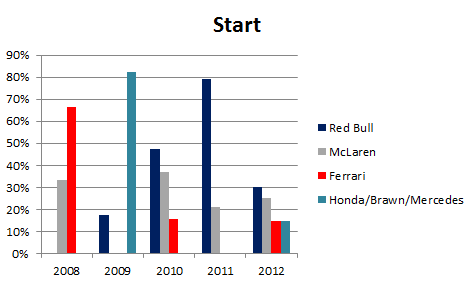 WIN PERCENTAGES IN THE MIDDLE OF EACH SEASON: 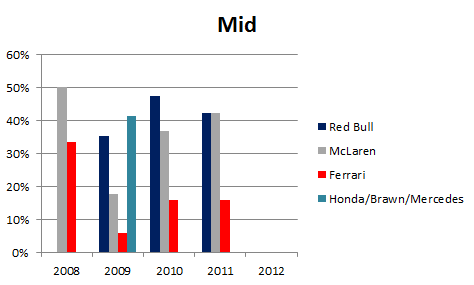 WIN PERCENTAGES AT THE END OF EACH SEASON: 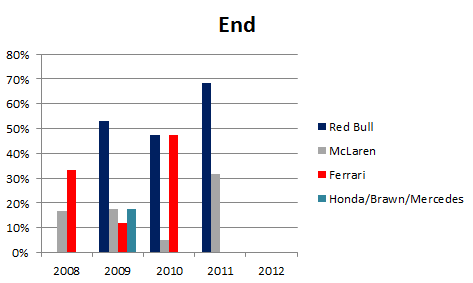 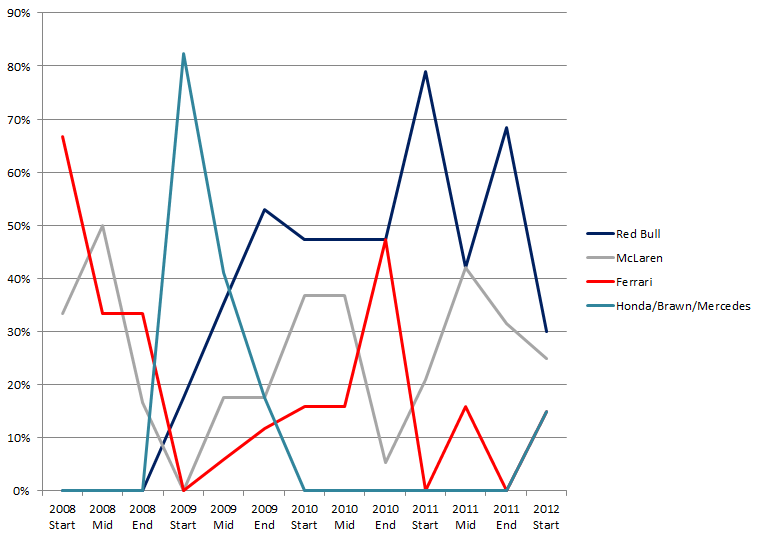 AVERAGE WIN PERCENTAGE AT EACH STAGE OF THE SEASON 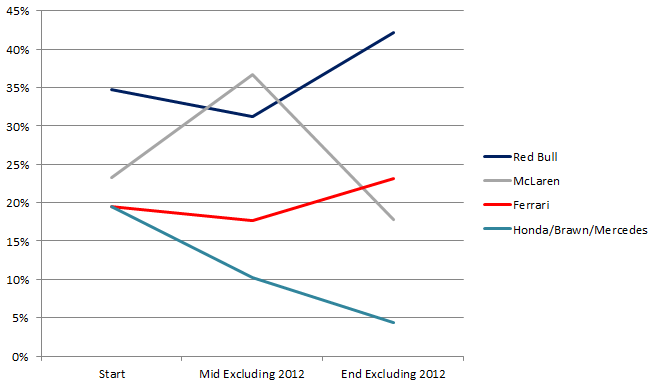 I'm not going to spend so much time analysing this post at the moment, but one thing that stood out for me were the trends in the last graph above. It would appear that McLaren are very much a mid-season team, whereas Ferrari and Red Bull are stronger at the end of the season. This bodes well for Alonso's chances this year, perhaps. Also, on both the average graph and the timeline graph, Brawn/Mercedes' rapid rise to the front and back down again is very apparent.

Interesting! Looks like McLaren are very good at updating their cars, as they have been this year too with three wins in a row in the middle but they tend to max out performance after that and Red Bull starts to take over. Honda/Brawn/Mercedes seem to be great at the car design part but lack resources (OK not really but compared to McLaren, Red Bull, and Ferrari they definitely do) and probably some skill at developing the car. They are the ones that have brought in both double diffusers and double drs but once everybody else caught on they were out of luck a bit. Maybe the new triple DRS system will help them out I feel like they kind of have to use it at this point and not pull a Lotus and run it on like 5 Fridays in a row but never in a race. At this point they don't have much to lose and if it doesn't work in the one race then they scrap the idea. Except don't run it at Singapore it wouldn't help at all. Actually somebody should design a special ultra high downforce rear wing like they do for Monza but reverse. It would be quite useful nowadays. I'll stop ranting now and just say Ferrari seem to be consistent across the whole of a season.

Contributor
The Artist..... The graph I posted in the first post only applies to the first 13 races of the season and like you said those wins in 2008 came at the end of the season. For the second post I could have included Lotus/Renault along with the likes of BMW Sauber, Williams and Toro Rosso, but these teams have only one race win or two and only in one year. Then you add more mess to the graphs without really adding any interesting content.

When the season is over what I'm thinking of doing is looking at podiums rather than wins. Then I'll add Renault/Lotus and (BMW) Sauber since they picked up a lot of podiums in 2012 and 2008 respectively.

. Really appreciate the time you've put in to finding this info out. Pat on the back from me buddy