Contributor
Just a little thing I played with for ten minutes that I'd thought I'd share. What I've done is counted the number of times each driver has beaten their team-mate at a race. If neither driver in the team is classified then no points are awarded to either of them.

Unsurprisingly it's another table that Vettel leads and, as we all know, the first time Webber managed to beat him was at Germany last weekend. Hamilton and Alonso tie for 2nd place beating their team mates 7 out of a possible 10 times, again as expected as these two in my opinion are still a cut above the rest. Stand-ins Chandhok and de la Rosa share the bottom of the table.

Now that's got the expected out the way there are a few results that are a bit surprising, perhaps. For example:
Finally, just for fun I added these totals to the current drivers championship to see what effect it has: 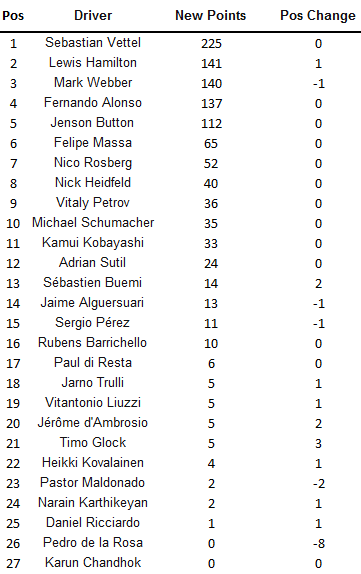 It doesn't really change much, it is just one point per race after all, but Webber loses 2nd to Hamilton, Vettel's lead is extended further and at the bottom it gives the new teams something to fight for, both amongst themselves and even in the constructors as reliability is rewarded. In this system Virgin would have 10pts, Lotus 9pts and HRT 7pts in the constructors championship. Virgin should be applauded here perhaps, because despite their pace not being great this means at least one of their cars has finished every race this season.

Valued Member
We have something similar going on here Sushi

Contributor
Ahh I had a feeling I'd seen something somewhere so I had a look a few pages back in the Stats section but didn't think to look there.

I have to say I like Sushi's presentation. Perhaps the threads could be merged?

Contributor
I must admit I'm not really planning on pursuing this any further, at least not on a race-by-race basis and I'm not going to have too much time to indulge my spreadsheet habit from September

Bit of a research fail I think

Bit of a research fail I think

Fenderman said:
I have to say I like Sushi's presentation. Perhaps the threads could be merged?
Click to expand

That thread FB linked to is actually the team mate prediction game, which we do every year.