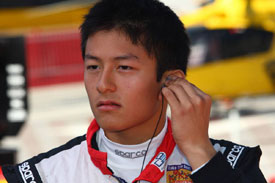 It looks as though this guy has secured the Manor drive though it hasn't been officially announced yet.
So who is he? He's an Indonesian race driver aged 23. He's had a lot of single seater experience. For the last four years he's raced in GP2 for different teams with mediocre results ( 14th 19th 15th) until last year 2015, when he raced for Campos and finished 4th. And that was quite a string field.
In 2014 when he finished 14the he was partnered with Rossi, but comparing results is difficult because they didn't race against each other all season, there were team changes.

So that's the guy who looks likely to partner Werhlein.
Click to expand

Contributor
Manor aren't blessed with huge funds, does he bring cash with his drive ?

Contributor
He can join my team any day.

This article is suggesting Haryanto's signing will be announced today.

It has been confirmed.
Haryanto confirmed for 2016 Manor F1 seat

Contributor
They big up the driver, and play down the money. I suppose they can't be honest though. It will be interesting to see how he performs in an F1 car as a race driver and not as a test driver.

Well done to Rio Haryanto, he shown glimpses of promise in the years ive seen him in GP2 only 2015 has he really started being competitive has got 3 wins but they are sprint races & only feature race podium he's managed in his 6 gp2/gp3 seasons was back In 2011 with Germany gp3 victory. But I had expected it because apparently the Indonesian government have given him some money. Even though I know there is no sentimentality In sport I feel its a shame because id hoped they would have given Will Stevens or Alexander Rossi a chance in an competitive car as a bit of a thanks after flogging a dead horse all last season 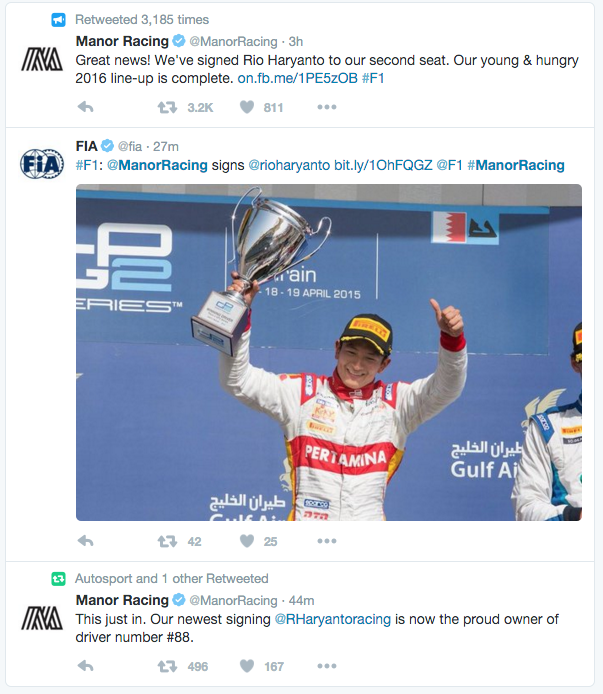 Contributor
Fair play to him for having a ton of sponsorship money, but i can't help feeling he's going to be out of his depth in F1.

I don't think he's the most promising prospect, probably will never have a drive with even a midfield team. But they could've done much worse.

Sadly for Haryanto I worry that he won't have much a chance to prove himself, except maybe that he's faster than Pascal Wehrlein.

did well but can you really just count this as a proper outqualifying because it means nothing with being so chaotic. i think it was harsh i wouldve blame grosjean as he is the 1 that could infront of him haryanto

Contributor
So Rio needs to pay Manor 4.2 million quid by July to keep his seat for the whole season. The Indonesian government have come up with a novel way of raising the cash by asking people to do it by text message.

It's like F1's really crap version of the Fan Boost.

Staff Member
Premium Contributor
In the ranks of pay drivers he's certainly not the worst there's ever been but there are plenty waiting to take his seat if he can't come up with the dosh.

Contributor
I there a number I can text to have him voted out?