Contributor
Oh go on then, here's another 30 question quiz monster to pass the time.


Q1. What was the last year we raced in Turkey?

Mugello, Italy
Q3. How many retirements did Max Chilton have from races in 2013?

None. Best result 14th.
Q4. Adrian (Slasher) Sutil glassed Lotus owner Eric Lux in a nightclub in 2011, leaving him with 24 stitches and Sutil with a conviction for GBH. But what country did it happen in?

Shanghai, China
Q5. Hamilton was called as a defence witness in Sutils trial. What reason did he give for not turning up? a)He didn’t give a reason b)Attending a magazine photo shoot c)Attending the team car launch d)Washing his hair

He was attending the launch of his teams car
Q6. What year did Alonso last win a race?

Benetton, Ferrari, Honda, Brawn, Mercedes
Q8. Ross is famous for having a hobby rather far removed from F1 racing. What is it.

Fishing
Q9. Which team currently holds the record for highest percentage of wins per race starts? 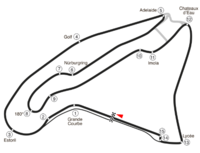 1st Mercedes, 2nd Red Bull, 3rd Ferrari and 4th Force India
Q12. Which driver was the only one to race in and complete every race of the 2016 season?

Farm, Arena. (Silverstone corners in order)
Q15. Hamilton is currently in 2nd on all time wins with 53. How many wins is 1st place man Michael Schumacher on?

91 wins
Q16. Is Sebastian Vettel ahead or behind Ayrton Senna in all time wins?

Ahead. Seb 42. Senna 41
Q17. Bahrain’s ‘government’ is a constitutional monarchy (dictatorship) with a disturbing human rights record. What year did the Bahrain GP get cancelled due to protests in the country?

2011
Q18. Flavio Briatore famously left Renault in 2009 following the race fixing scandal. But who else left the team due to the scandal?

Executive director of engineering, Pat Symonds, was handed a 5 year ban which was over-turned on appeal.
Q19. The British GP in 1998 saw M. Schumacher handed a 10 second stop go penalty 2 laps from the end of the race. Schumacher still won the race by taking the penalty on the last lap, crossing the finish line in the pit lane before taking the ‘penalty’ after the race was won. The penalty was later rescinded and all 3 stewards had their licence removed by the FIA. But what incident was to blame for the penalty in the first place?

He passed Alexander Wurz under the safety car
Q20. Picture Round. Who is this future world champion? Click to enlarge. 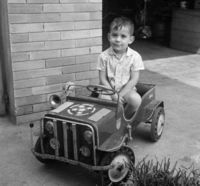 6. FA,LH,JB,MW,SV,NR
Q22. The season opener in Oz isn’t far away now. But who won in Australia last year?

Nico Rosberg
Q23. What date is the season opener this year?

6th in Austria
Q26. How old is Fernando Alonso?

c)43
Q28.Which figure from F1 once likened women to ‘kitchen appliances’ before apologising, then repeating the statement.

Bernie Ecclestone
Q29. There are 6 drivers who have won only 3 world drivers titles. For a point name at least 5 of them.

You could of had - Jack Brabham, Jackie Stewart, Niki Lauda, Nelson Piquet, Ayrton Senna, Lewis Hamilton
Q30. Final question and a picture round to spoil you. Name both drivers and the event for a point. Click to enlarge.

Contributor
18 - should have done better, really...

The Eyes Have It