Never have I known so many people rate a test driver as a future world champion so I thought I'd start a thread for people to pass there opinions on young Nico.

Has an incredible record in other Formula's - won A1 Go in 06, won F3 euro masters in 08, won GP2 in 09 and then came into F1. There was a lot of hype around Mr Hulkenberg in arriving in F1 as he was seen as the next 'Lewis Hamilton' but in all honest in the car he was driving he was never going to be able to match what Lewis did as a rookie the question remains though did he do enough? He scored 25 points to his experienced team-mate Rubens Barrichello's 47 which doesn't look good - however is it unfair to judge a rookie against the most experienced F1 driver in history? Especially a driver who was having a resurgent after being a world championship contender the season before.

To be fair to Hulkenberg he got better as the season went on and it was clear he was getting to grips with F1 - the icing on the cake of course was the brilliant pole he scored in the wet in Brazil. Although tactical he was advised as when to go and on what tyres he still had to produce the time and being on pole by over a second is pretty impressive. I think if Williams could have afforded to keep him on they would have done but needs must when the bank manager drives and poor old Nico was shown the door.

Currently testing with Force India and you have to think that right now he's breathing down Sutil's neck for the race seat. I really hope they take a gamble on him earlier than later as want to see how he fares against Di Resta - I actually think that might be the making of both of them. Currently Di Resta is being praised and lined up for the Merc drive at the moment but you have to say if Hulkenberg comes in and beats him surely Merc would take the Nico option?

Is he as good as he's hyped or does having Will Weber as you manager help you become hyped up? Interestingly back in 2009, when he was being considered for replacing Luca Badoer at Ferrari, Weber stated that Hulkenberg would not take the seat now but he would sign for Ferrari in 3 years time - that makes 2012 - next season!

As mentioned on another thread there have been 2 world champions who have had a season of F1 and then dropped out to take a test driver role for another year - Mika Hakkinen and Fernando Alonso - will Nico make it a hattrick?
Click to expand


I meant Hulkenberg; was watching FP1 and on here as he slammed into the wall. Granted, idiot's a tad harsh

Contributor
ahhh - not got access to practice - my bad!

FP1 is the most dangerous of testing sessions, the track is dusty, not used in racing for a year, the teams are testing new parts which have their inherent unpredictability, the driver is the reserve with not much time behind the wheel, last but not least, this track is unforgiving if the car's setup is not balanced.

Under FP1 conditions with a reserve driver anything can happen, thus, Idiot is too harsh a word to use.

Valued Member
I didn't particularly feel Nico improved too much as 2010 went on, to be honest. I had expected him to, hence my disappointment.

Obviously the pole position in Brazil was exceptional, but in dry running I couldn't see too much improvement, disregarding the first couple of races when he was just playing himself in.

To contribute to the debate, here's the spread of his qualifying times against Barrichello through the season. Points above the line indicate Nico quicker than Rubens, vice versa for points below. The distance from the 100% line shows the relative size of the gap (% used rather than seconds to allow for varying lap time length). Q2 and Q3 times have been used in all cases except Round 5 (Catalunya) where Barrichello was eliminated in Q1. Rounds 3, 13 and 18 have been excluded as they were wet qualifying sessions. 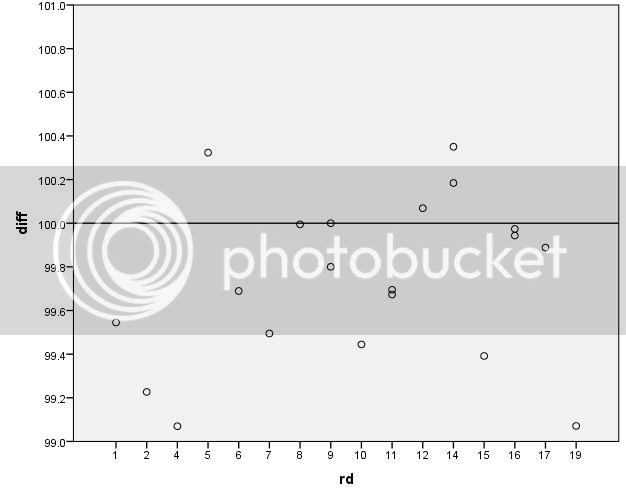 Galahad said:
I didn't particularly feel Nico improved too much as 2010 went on, to be honest. I had expected him to, hence my disappointment.

Were we expecting too much from Hulkenberg in his rookie year? Let's face it, his team mate last year was the most seasoned driver in F1, The Williams car as we all know was a midfield car, Perhaps Hamilton rookie season has raised the bar of expectation beyond what rookies were once expected to achieve in their first year.

Valued Member
I think di Resta, Perez and D'Ambrosio are providing the answer to that at the moment. I rate Barrichello higher than most, but given Hulkenberg's record in the junior categories (not just the record, but the performances too) I expected him to be matching Rubens by mid-season, to be honest.

For a rookie, I'm looking for flashes of speed, but also, more importantly, evidence of improvement. However, the Hulk could still have a great career after a mediocre debut season - or even two. Jenson Button could probably tell you that.

Contributor
With Sutil performing now, I find it hard to see Hulkenberg driving in a Force India in races next season.

Unless they punt out di Resta is very unlikely.

Contributor
Hadn't seen your last comment Sly - was just about to ask the same question.

What is Hulkenbergs future going to be? Schumi has a year left on his merc contract and is going nowhere, Rosberg is likely to sign up again as there is nowhere for him to go otherwise which means the idea that Di Resta(or even Sutil) were going to upgrade to Merc is not going to happen. With both Sutil and Di Resta putting in good drives of late I can't see Force India being quick to replace either - which once again leaves Nico without a race seat.

His other options are limited as well as just can't see a seat for him. Red Bull/Toro Rosso already have too many drivers - same with Renault. Mclaren is a no, Ferrari is no, Sauber is a confirmed no, Lotus is looking increasingly more unlikely as Trulli looks set to resign. I really can't see him going back to Williams and all that leaves is Virgin and HRT. Glock is already confirmed at Virgin and HRT's new investors want to go 'the spanish way' so they look unlikely too.

Even if he was offered a Virgin or HRT seat would it actually do his career any good?

The only person ever to win a world championship after missing 2 whole season of F1 is Niki Lauda and that was a career break not a career start. I know its very early to say it but is Hulkenberg going to be added to the pile of drivers with potential that never got a chance?

Contributor
Ouch! bit harsh on old Nico putting him in the 'past drivers' section!

I guess we'll have to wait for official confirmation but I expect the Current prefix will be added to this thread soon.

Contributor
Didn't Force India say they'd be no decision on their drivers until December?

If thats the case I can see Sutil going to Williams

Well if the Hulk has signed and Sutil has gone its bye bye Rubinho, and no raikkonen return

thank god for that!

RasputinLives said:
thank god for that!
Click to expand

I would of liked to see him personally

Contributor
I just think we don't need another former great trundling around at the back and picking up hs pay cheque - give the drive to likes of Hulkenberg and give em a shot!

RasputinLives said:
Didn't Force India say they'd be no decision on their drivers until December?

It's possible that Adrian decided to take the plunge and has already agreed terms with Williams, and Force India's decision is a response to that.

*EDITED* - I see that Rasputin has already made this suggestion in the other thread.

Contributor
I have read that Sutil's sponsors have stopped sponsoring the team since they got bought buy "Lenovo", don't know if that's true or not.

Valued Member
I'm going to declare myself a Hulk-believer.

Say, it is Monza 2008, Sunday morning, and the weather was dry. Here is the grid: 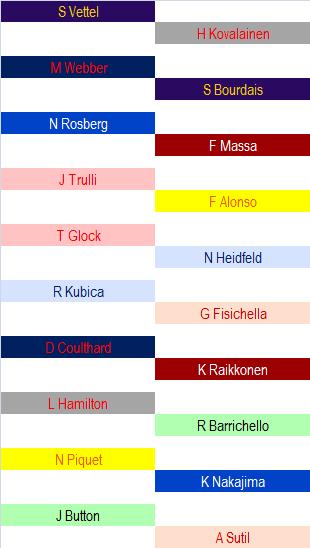 If it is dry, Mr Vettel is not going to hold on for long against Kovalainen. Raikkonen and Hamilton are going to come from the back of the field, and the BMWs might do something similar. Massa, meanwhile, is an almost cert to clear Vettel.

Now, that race has been declared a moment of genius, quite rightly, on the tally of Sebastian Vettel, and I will state here and now that the two situations are not directly comparable. Vettel had the beating of Sebastian Bourdais, and he had a very decent end to that season.

However, the Toro Rosso car that took pole at Italy in 2008 was a Newey Red Bull with a Ferrari engine. At the previous race it had been 1.6s off pole in Bourdais hands, a similar deficit to the 2010 Williams in the race before Brazil.

So, OK, Hulkenburg didn't have the beating of his team-mate that rookie season. Well, his team-mate was the uniquely experienced Rubens Barrichello, fresh from 18 years in the business. In Toro Rosso in 2008, Vettel was the only one of the two who had started an F1 race at the start of the season.

Also, at qualification at Monza, it is worthy of note that the first (eventual) Championship Top Six driver in the field was Felipe Massa. Basically, Hamilton, who should have been on pole, stuffed up his own strategy by taking an unnecessary risk.

Meanwhile, for Nico the whole lot of them lined up. Second was Vettel, third Webber, fourth Hamilton and fifth Alonso.

I'm not saying he'll be a great driver, but I think his pole lap in Brazil in 2010 was from the drawer marked "special" and have sought to prove this with a comparison.

I don't think di Resta or Sutil have anything in their careers which bares comparison, though.