2014 was always supposed to be the year Marcus Ericsson came into F1 but it was all suppose to be done so differently. In the pre 2013 season it was announced, in a big blaze of glory, that Ericsson had signed for DAMS for the 2013 GP2 series and would be their lead driver. DAMS had secured the last two GP2 drivers championships and the already rated Ericsson would drive in the number 1 car in what was sure to be a dazzling championship season before his all out assault on F1 in 2014. Unfourtunatly it didn't happen like that as his car started the season by falling apart and he continued it by managing to find accidents and,while he scored a couple of impressive results, 6th in the GP2 championship must have been gutting. It wasn't that the speed wasn't there as he continued to score poles and fastest laps, it was just for some reason the results would not come.

Ericsson was born on September 2nd 1990 in Kumla, Sweden. Like most drivers he started his career in karts and this is where he came to the attention of 1999 indy 500 winner Kenny Brack who has been Financing his career ever since. Ericsson won Formula BMW, Won the Japanese F3 series, and got rookie of the year racing for Raikonens team in British F3. He even tested the Brawn F1 car at the young drivers test in 2009.

Ericsson came into GP2 in 2010 scoring a victory (and not much else) in his first year. In 2011 he drove for Isport and was outclassed by Sam Bird but in 2012 he strung together a brilliant second half of the season which meant he went in to 2013 as the favourite for the title.

So Ericsson's banner year didn't happen but he's still found his way into F1 but lets not underestimate the guy, he's quick and he loves a scrap. I can't wait to see him wheel banging with Kobi! However I just get the feeling that Ericsson is the sort of driver who will be half a lap away from a great result before a pigeon some how flies into his visor causing him to spin off rather than a future champion.

I have no doubt that Ericsson's Kimi like attitude and pace on Saturdays will win him some fans on Apex (I know Slyboogy has a soft spot for him already) but I have to warn you this driver just might break your heart.
Click to expand

Valued Member
Sorry RasputinLives, your post had a rendering error on my system... 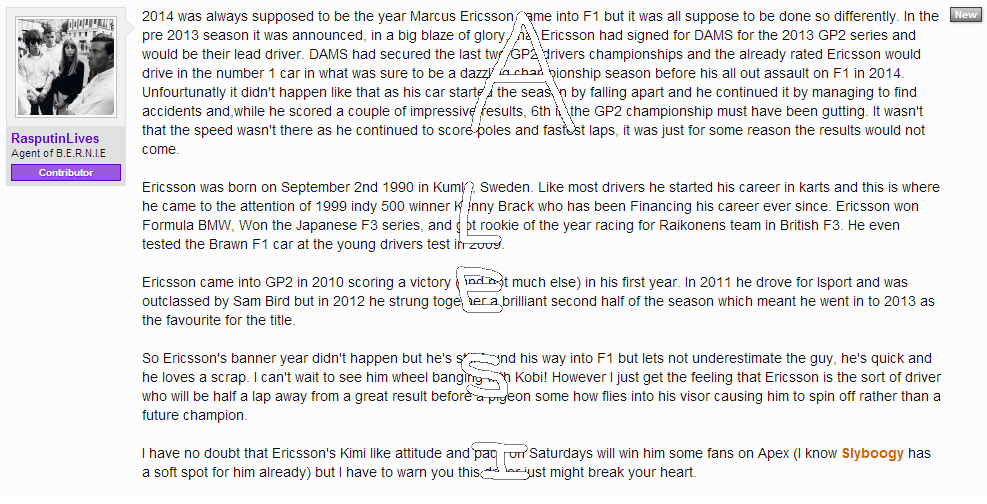 Not sure he's quite that good! Maybe more of a Massa?

Contributor
I'm no expert on up and coming drivers and I missed this guy altogether. So, I guess my first question therefore is "where is his cash coming from?" and the second "how much is he/his sponsor paying Caterham to trump van der Garde?" I read that vdG had at least £5m on offer and he drove well enough last year.

More money? Not more talent? Or have I got him wrong...?
M

Contributor
Do you reckon he could do a deal with his name and get Ericsson phones on board? It's an opportunity missed if he doesn't I'm tellin ya

Contributor
Ericsson is managed by former rally driver/Indy car driver Kenny Brack who happens to be on the board of a business called Mekonomen who are Scandinavia's biggest spare car parts company.

I imagine they have some cash.

However don't be fooled by that as he is highly rated and like I said was the hot favourite to win GP2 last year and whilst it didn't work out we did see glimpses of him on form where he was head and shoulders faster than the rest of the field. Like I mentioned before he tends to have Alesi style luck when it comes to getting a result (or he did last year).

I'd say with Fernandez threaterning to pulling the plug on Caterham if he doesn't see improvment that they have plumped for him as someone who brings a bit of money but also has a bit of speed. I'd say when he gets up and running he SHOULD bring more than the likes of Pic, Van Der Garde and Chilton to the team. However, like I said, last year was suppose to be his banner year but it didn't happen which means there is no telling whether he'll adapt or not.

I guess most people won't know him or have expected to see him in F1 so the pressure is off which might suite him.
Last edited: 21 January 2014
M

Contributor
Kenny Brack isn't he the guy that does all that stunt driving on you tube?

He did survive this however!

Contributor
It sounded like Fernandes really wanted to put Frijns in the car but eventually decided it was too early for him. He barely seemed to mention Ericsson when he was talking to Ted Kravitz. I'm not going to pretend that I think Fernandes knows anything about driving but it sounds to me like Ericsson is going to have to have an impressive 2014 to keep a race seat, and getting noticed more than Kobayashi will be difficult.

Mephistopheles said:
Kenny Brack isn't he the guy that does all that stunt driving on you tube?
Click to expand

Contributor
sushifiesta from about 6 or 7 races in I'd expect Ericsson to start to beat Kobinin quali. Not sure he'll be able to translate that into race day but it might get him a few headlines.

As for Frinjs 'not being ready'. As a 3.5 champion I'm not sure how he can bevmore ready.
M

Contributor
I got it wrong again didn't I dad...

Frijns is 'not ready' because he doesn't have enough money, RasputinLives

Contributor
I think that is very much the case as he has a much better record than Ericsson and about as much experience.

Having said that Ericsson was the faster in GP2 last year and Frijns got bossed by his team mate Jon Lancaster(another under rated and under funded driver). I'm hoping Fernadez gives Frijns a full season for Caterham in GP2 so we can see him show the form he did in 2012. If he does then I agree that Ericsson will find it very hard to hang on to the seat.

Having said that I do think Marcus will give Kobi a bit more trouble then people are anticipating.

*edit* - just had a quick scan of the GP2 website I see Caterham have confirmed their line up as Rossi and Hayanto so Fernadez can't rate Frijns that much then!
Last edited: 22 January 2014
S

Well if D'ambrosio made it back then, anybody can so why not Ericsson... Not consistent enough but loaded so he will get one year before realising he needs to pay another 25M to do another year... Ask Chilton if you are sure!

Contributor
You could be right Sergio but I would put him a little above D'ambrosio skill wise.

Has anyone seen anything on how much Ericsson is bringing to the team cash wise?
S

Agreed Rasputin! I had 25M usd but someone told me 27 in Daytona... I know that it is the biggest they ever saw at Caterham and Garde had "only" 15 on offer... Nonsense if you ask me...

Contributor
If he is bringing 25m to the team that will be about half their budget for the year. I'd expect significant sponsorship on the car to coincide with the move. Are Caterham showing new sponsors or are airbus and GE still their main ones?

Contributor
Ericsson becomes the 10th Swede in F1 and heres a great article about the other 9.