Contributor
Had a brief conversation in chat with Galahad on race day regarding Ericsson. He's actually starting to show signs of becoming quite a decent midfield driver with a couple of really good performances in a row.

Valued Member
It's always dangerous to judge drivers on their performances at real backmarker/cannon fodder teams. While Alonso drove beautifully in his debut season with Minardi in 2001, I've never forgotten that he looked a lot better than he would have done, relative to his team mate, because said team mate (5pts to anyone who said Tarso Marques) had to use steel brakes all year; team boss Paul Stoddart couldn't/wouldn't pay for two sets of carbon ones.

So maybe he was in the "Marques car" last season. Either that or Nasr isn't as good as I thought he was.

Valued Member
Galahad - I suspect that if either of the Caterham drivers were in the "Marques car", it was Kobayashi. Especially considering that they had him start 'n' park in Russia.

Ericsson had picked up form significantly in Suzuka, then the team collapsed!

I picked up one of Ericssons's under race suit tops in the Caterham auctions; I might ebay it while he's on a run of good form

Valued Member
A genuine first then today: Ericsson crashing whilst overtaking the Safety Car as a lapped runner. I think he did a spin at Suzuka in 2014 under Safety Car too.

“It has been a very tough weekend from the start to the end. With the pace we have had this weekend, the race was decent from my side. Unfortunately, I then had some issues with the brakes overheating behind the safety car. I tried to bring the brake temperature down, but at the same time I had to keep the tyres in the right working window. The combination of overheating brakes and cold tyres made me struggle a lot to stop the car, so I could not avoid sliding into the barriers.”
Click to expand...

He knew about the issue and yet he pushed, he should question himself.

Valued Member
At half speed, Marcus.

Valued Member
Ben Edwards and David Coulthard discussed this at length; how the cars lose temperature as the Safety Car isn't going fast enough (fast enough for whom? The marshals on the track?)

It's a thorny problem for sure. Then again, the car does have two pedals for this eventuality...

tip of the hat to Ericsson's drive in Bahrain. 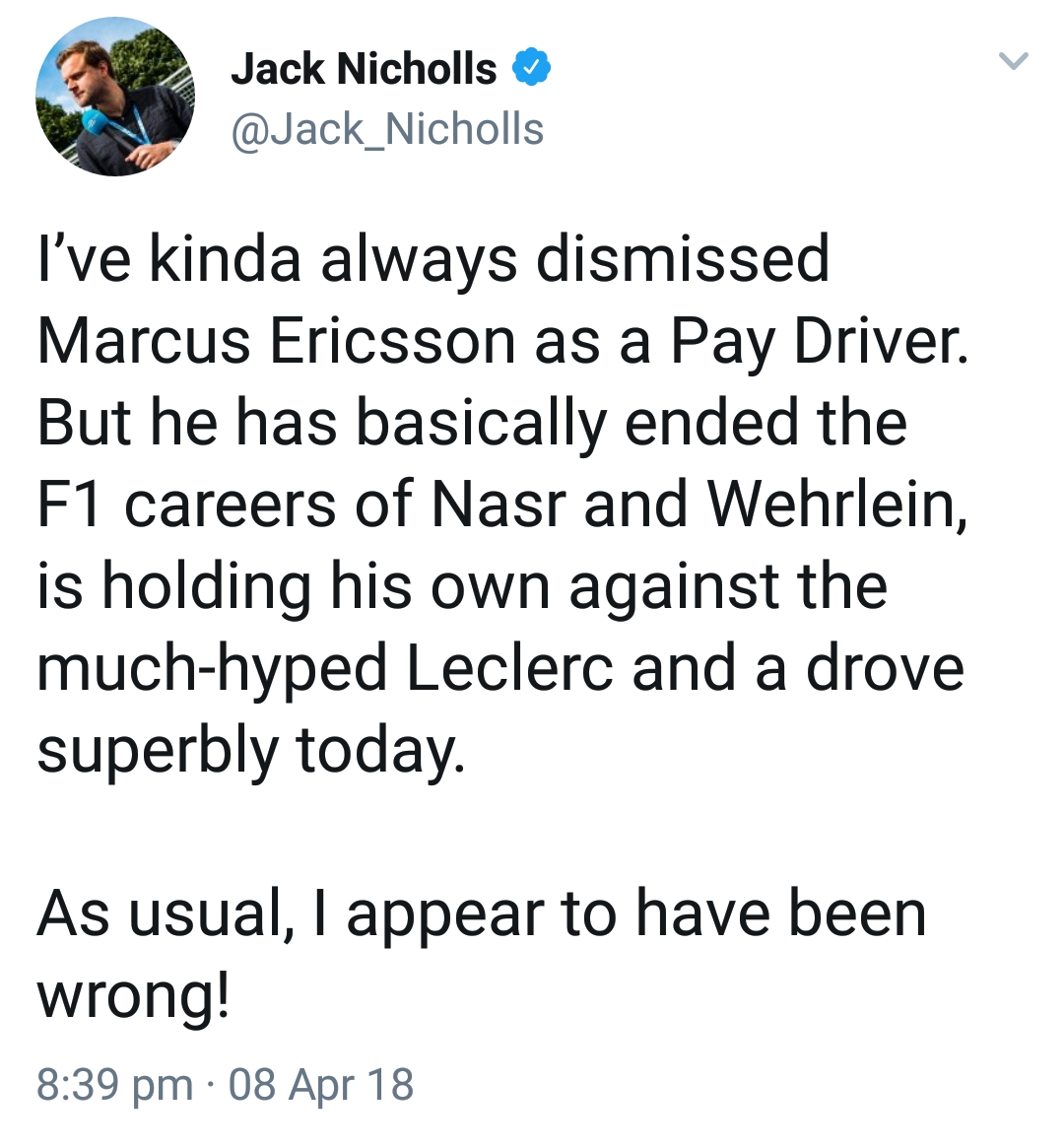 Hes may have a point. I still dont rate ericsson but i might be underestimating him

Personal sponsors also acting as shareholders of the team and getting upgrades way ahead of your teammates makes life easier. Despite that, both Nasr and Wehrlein beat him, not by much as there wasn't much room for improvement in the disaster of a car the Sauber has been in the last few years but they beat him.

Contributor
Wherein's quali record against him at the back of last year was not good.

Valued Member
Let’s not get carried away; he’d not scored a point in his previous 48 Grands Prix. Badoer’s entire pointless career was only 51.

RasputinLives said:
Wherein's quali record against him at the back of last year was not good.
Click to expand...

Rutherford said:
Personal sponsors also acting as shareholders of the team and getting upgrades way ahead of your teammates makes life easier.
Click to expand...

Contributor
I was shocked (well not shocked) to see Sky give Marcus Ericsson a 5.5 out of ten and one of the lowest ratings for the Spanish Grand Prix. I thought he was fairly solid and put up some good defence against Sainz! He was marked even lower than Grosjean!