Today he's a joke figure who wears ridiculous shirts. But once Eddie Jordan was a team principal, possibly still a joke figure, admittedly, but his team did not do too badly.

Their first season was in 1991, with a green and blue 191 which goes down as one of the very best debut cars ever, and they finished 5th in the WCC. The other debutant that year was Lamborghini/Modena, who did not impress. The next year saw Andrea Moda enter the fray. Entering F1 was not easy, but Jordan did it with flying colours.

They picked up their first pole position at Spa in 1994, and their first win (and one-two) at the same venue 4 years later. They then went on to their year of years, where Heinz-Harald Frentzen led Jordan to 3rd in both Championships.

OK, so it fell apart somewhat. Despite a victory for Giancarlo Fisichella at Interlagos in 2003, 2003-05 would be the swansong, fighting with Minardi at the rear. But EJ and his team had built a team with no heritage, at a time when F1 entrants proliferated, and made it successful.
Click to expand

Valued Member
I know some people liked it but I thought the dragons teeth on the front of the B&H cars was a bit silly. Loved the 191 though, what a stunning car even Andrea de Cesaris managed to finish a few race.

Contributor
I quite liked the Jordan livery from '98-01!

Valued Member
It was a triumph of optimism over reality to some extent. The '91 car was brilliant, but the sprinkling of sponsors wasn't enough to pay Cosworth for the engines. I think Eddie himself said, the green car was pretty, but it didn't pay the bills! Taking the inferior, but free, Yamaha for '92 allowed Eddie to pay the debts incurred the year before.

Ultimately it comes down to the chassis. If the car shows promise, you can persuade (if you've got the gift) sponsors and engine manufacturers to support your team and move forwards. The team was still operating hand-to-mouth until the B&H deal in '96, but the performance of Gary Anderson's cars provided the base upon which that rested.

Staff Member
Premium Contributor
After Lotus folded, I was aJordan Fan through and through.

It was ironic that Heinz Harold Frentzen ended Damon Hill's racing career twice. Firstly by taking his seat at Willliams and leaving Hill only able to get an Arrows drive for 1997 and then after coming to Jordan, putting the team in a position to win the WDC / WCC for a while in 1999. Imagine how much better off Jordan would have been if Hill had have come to the party as well.

For a while they seemed to be the least corperate of teams and yet still managed to out score some of the more established teams. I always wanted to attend one of Jordans post Silverstone GP parties.

Contributor
I went to the Jordan 10th birthday bash at Donington in 2000, where Wattie took the beautiful 191 round the circuit, and Frentzen unofficially broke the lap record in the EJ10. I got loads of photos (sadly on film, not digital), and got to see Thin Lizzy (sort of) at the musical party afterwards. A top day out - sadly they seemed to go into terminal decline thereafter...

Contributor
Such a beautiful car 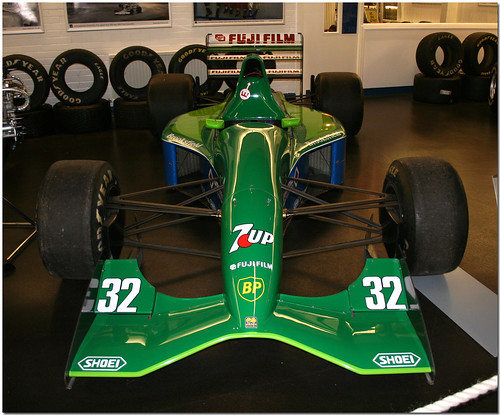 and I think the sponsors work because right now I fancy a 7UP - that could be the weather though.

Loved the Jordan team from their first race and in my eyes are the only 'brand new' team other than Sauber to make an impact in F1 for the last 20 years. Lets not forget that Force India traces their roots back to Jordan and they are on the up again.

Have to say the yellow car was not as beautiful and much prefered the Rubens era Jordan to the Ralph era Jordan.

Where influence is concerned does anyone think that Red Bull uses Eddie Jordan's 'fun not corporate' style as a model for their own team when they took over Jaguar? The "hey we're new and funky and we don't take things too seriously" thing had been done by Eddie before but a bit more naturally I think.