Today marks the 45th anniversary of that most tragic day at Hockenheim when Jim Clark, the greatest driver I ever had the pleasure of seeing in action, was killed when his Lotus crashed.

Clark amassed some incredible statistics: 33 F1 poles in 73 races, 25 wins in 72 starts. What always amazed me was how effortless he made it all appear. The one race of his that I will never forget was Monza in 1967. Clark was leading, but had to pit with tyre issues, thereby losing a lap. Upon rejoining, his brilliance was such that he not only recovered the lap he lost, but he regained the lead. Ultimately he ran out of fuel on the last lap, handing the win to Surtees in the Honda, but EVERYONE knew who was the "real" winner. And it's not like the field was weak, with the likes of Graham Hill, John Surtees, Jack Brabham,Jackie Stewart,Chris Amon,Denny Hulme, Dan Gurney, Bruce McLaren, Pedro Rodriguez, Jo Siffert and Jochen Rindt taking part!

I had the privilege of meeting Jimmy on several occasions (drivers were infinitely more accessible in those days), twice at the late and much-lamented Tasman series, and found him to be an extremely nice and modest man.

Formula 1 has never been the same for me since Clark's death.
Click to expand

Too old to watch the Asian races live. · From United States
Australian by birth. Have been living in the U.S. for nearly 40 years. I have been working on spacecraft (primarily interplanetary probes)integration for decades.
Contributor

Contributor
A world away. RIP Jim.

Valued Member
I'll never forget the quote on the BBC programme about him when asked about driving faster "I concentrate, and the more I concentrate the faster I go", or words to that effect.

Supporter
FB 'When I want to go faster I don't drive any faster, I just concentrate harder'.

Valued Member
That's the one!

Supporter
I am far too young to have seen him race but from that BBC documentary the one thing that stuck in my mind was the story of the Lotus 49 in 1967. Clark was living in Paris as a tax exile and as such was unable to enter the UK to test the new car. Graham Hill therefore tested the car and put the car on pole for it's first race at Zandvoort (I think this was the 3rd GP of the season?). Clark turned up having only driven the car for the first time that weekend and promptly won the race.
M

Contributor
Was Jim Clark at fault for the death of Wolfgang von Trips?

Supporter
He was certainly involved in the incident but I don't think i've ever seen anyone blame Clark.

Contributor
I'm to young to of seen him race. But I went and had a look at his statue in Kilmany in Fife a few years ago. Its only half life size (maybe even a third), rather disappointing they couldn't even give him a proper statue. 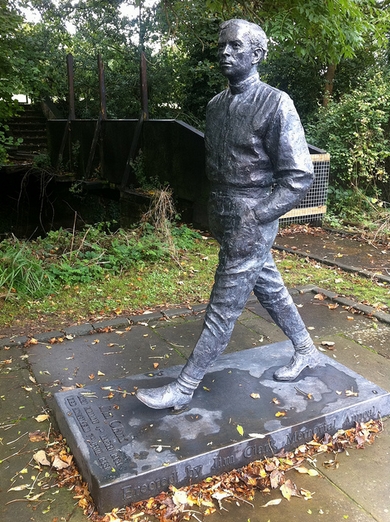 
That, of course, doesn't take into account the sheer number of races he failed to win because the Lotus of the 1960s is just about the most fragile front-runner in the history of the sport. He retired from 28 Grands Prix, therefore he achieved 25 wins in just 44 Grand Prix finishes.

I don't think you need me to tell you that that is sodding ridiculous!

I'm old enough to remember JC and although I never saw him race there was an aura about him.
To me, he couldn't have been a 'modern day' driver.

Valued Member
Irishgreen - But it would never have occurred. In the days before team orders, every Lotus win from 1962 right up to his death was his.
M

Contributor
Maybe that was his true height Greenlantern101

teabagyokel said:
Irishgreen - But it would never have occurred. In the days before team orders, every Lotus win from 1962 right up to his death was his.
Click to expand


This is true TB That's why I don't think he would have liked todays F1. Just my opinion.
M

Contributor
And there's me thinking that team orders went much further back then than they do now what with a number 2 driver having to go as far as giving up his car so that the lead driver could rejoin the race if necessary....

Or was that before that era? Even so I'm fairly sure that team orders did exist back then and I'm also sure that Jim would be the number 1 driver in any team even amongst all of today's drivers.

Valued Member
Mephistopheles - The giving up your car thing ended some time in the 1950s, before Clark's time.

teabagyokel said:
Mephistopheles - The giving up your car thing ended some time in the 1950s, before Clark's time.
Click to expand


No it didn't TB. I just think Clarke was one of the great drivers that would have told the team FO. Maybe I'm living in dreamland.
M