Mephistopheles said:
swim for a least a mile at a steady pace..
Click to expand...

I can swim but I have the buoyancy of a brick so I use as much energy staying afloat as I do moving forwards so it's not something I enjoy.
M

Contributor
Brogan when I was a kid one of the things that we always did at least once a week ever since I can remember was swimming my dad insisted that we all learnt to swim his technique was when he thought you were old enough and he could see you were on the verge of doing it was to pick you up and simply throw you in the deep end and so you swam he did make sure you swam and would jump in and grab you if you didn't I saw hin do this to my older brother and he swam like a bloody fish and so I was prepared for it when it was my turn, actually come to think of it that is one of my earlies memories, and it is the one thing I still do on a regular basis....

Oddly enough my mother did not learn to swim until I was about 12 years old.

Oh and my dads reason for insisting we all could swim was he was heavily into sailing and wanted us to be as well and so he though it was essential...

Staff Member
Couldn't agree more chap - everyone should know how to swim at least enough to save themselves if they fall in.
We did the same with our 20 month old daughter earlier this year - chucked her in the pool and let her go under and then supported her. She absolutely loved it

Most people don't believe me when I tell them I literally don't float; it's only when I show them what happens when I stop treading water and I sink to the bottom of the pool that they believe me

Of course it's also a great way to get and stay fit and has lots of benefits over impact sports such as running, etc.
M

Contributor
You don't float because of your lack of body fat but if you packed your lungs you would probably float for a bit anyway...

I am glad to know you see swimming as an essential and very pleased to know you are teaching your young un to swim it must be great for you going to the pool with her and seeing all those yummy mummy's with their kids, I'm sooo jealous...

Staff Member
Yes, if I fill my lungs I can just get the top of my head above water.
Not much good though as I'm still wet below the eyebrows

I don't think it's just a lack of bodyfat, I suspect it's also bone density - although I haven't had any tests done.

As for the yummy mummies, I couldn't possibly comment

Contributor
I gather that a lack of floating ability is very bad if you want to go scuba diving. Normally it's a matter of how many weights they put on you.

Staff Member
A friend of mine from way back was a member of the Army parachute display team.
He was only around 1.73 metres (5 feet 8 inches) but he was a body builder and he was huge.
The other guys had to put so much weight in their suits (in special pockets) so that they all fell at the same rate, they could barely walk to the plane

Sadly he had to quit eventually as he just became too heavy for the other guys.

Contributor
Well I used to be mega fit and skinny when I was young.

That was until I got some medicine for eczema, and the side effects was slowing my metabolism down. Put on weight, but couldn't shake it off, despite being active a lot.

It was a disadvantage when it came to karting, I was like Montoya

but then once I got a bike for my birthday, I was cycling constantly around my house, to my friends house, it was fun.

Kept that going while doing sports such as cricket (used to play for a club), football and badminton in school and with friends.

Then I broke my leg in a racing accident. Back to square one, put on a stone and a half in the space of a year, had no job, friends were busy with uni so only played football once a week if we could. I never really considered the gym, and my friends and I were just messing around about how I got a bit chubby, and I realised I must do something before it gets worse.

One of them convinced me to join up, but it was to do weightlifting. He said that was the best way to burn fat, but I couldn't be bothered as it was too much hassle, after a week I was thinking about packing it in. Only to realise £18 was taken out of my account that month.

So I thought, **** it, I'll give it a shot. I dedicated myself, started eating more healthily, went to the gym at least 5 times a week, doing running, cycling and few weights. It's the best I felt in a long time! I had free time so I could do it constantly apart from the two days that I did for work. I was loving it, taking it seriously, and even got my friend who was obsessed with weights into cardio. From March-June I was constantly doing 30 minutes of cycling at 85-100 rpm, and running at 11-12kph for half an hour, with the odd weights.

But then problems hit, I couldn't run anymore as I started to get some sort of pain in my left leg, I tried to push on, but then I thought rest it and comeback. The doctor said it would take 2 weeks to recover, I went to the gym 3 weeks after, fine for the first 3 days, only for the pain to come back. Rested it, same happened again, this time I took 6 weeks off. Back to normal woohoo!!!

Then I just got lazy, and lost my rythm, plus when that was going on, I started doing overtime to save up for my car, so didn't really have the time, and now unversity's started.

I've started back up again, but I'm nowhere near the level that I was. I only do 20 minutes of cycling, and 15 minutes of running at 9-9.5kph. Hoping to finally shift this last half stone maybe a bit more, but I think coursework and then exams will get in the way. Even a 40min workout should be fine for at least 3-4 days a week.

Bit of a life story, but what the hell

Staff Member
Just done my Devil run.
Basically just run as fast as you can for 6.66 kilometres.
Only managed 28 minutes today due to various ailments.

There's also the 606 run.
It's similar to the Devil run but it's only 6.06 kilometres and in addition you talk nonsense based on your own bias and prejudice, randomly insult people and shout FACT a lot.

Contributor
I've got the same buoyancy problem with swimming and so do my three brothers. We are all very lean but are fairly thickset with heavy frames and high bone-density.

This is the state of the treadmill and me after a fairly standard 5K (21 mins). 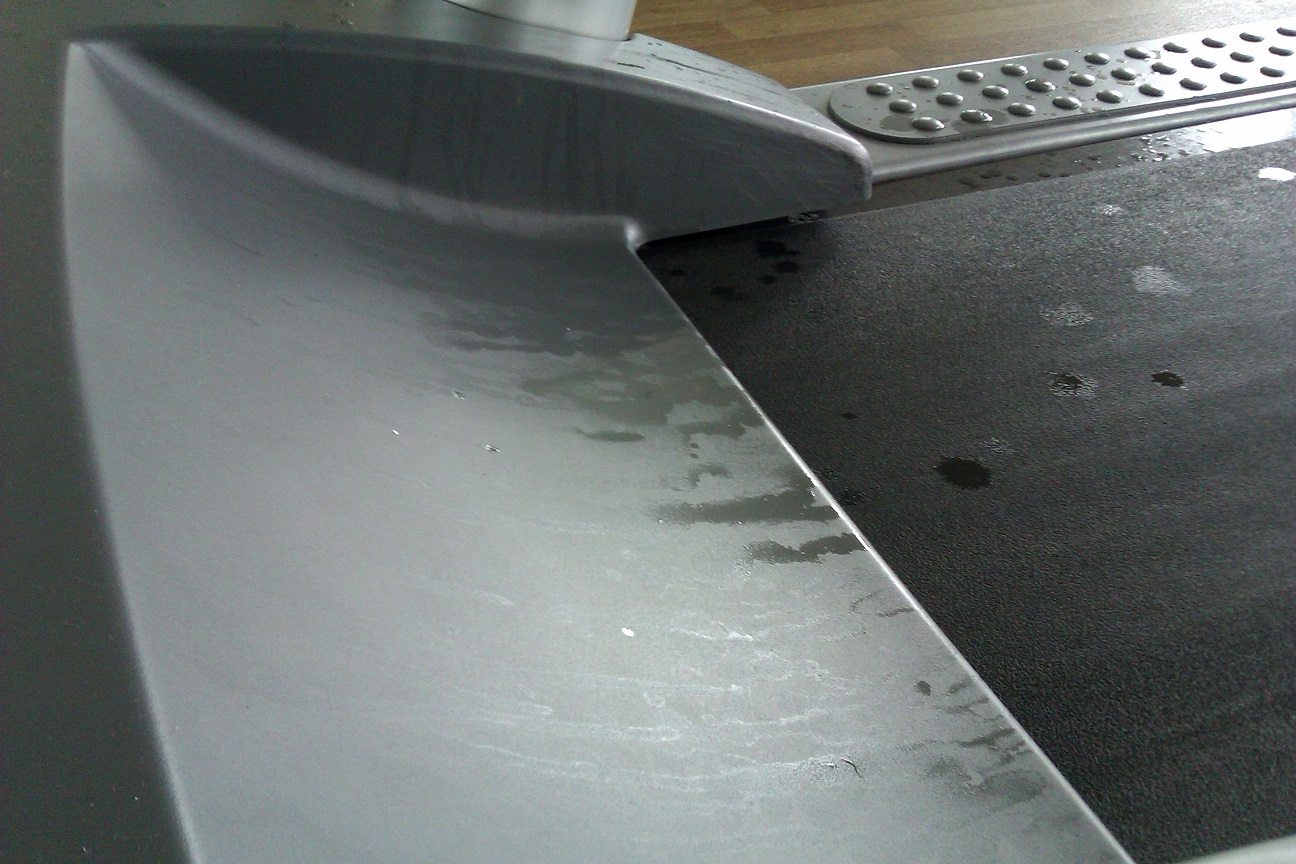 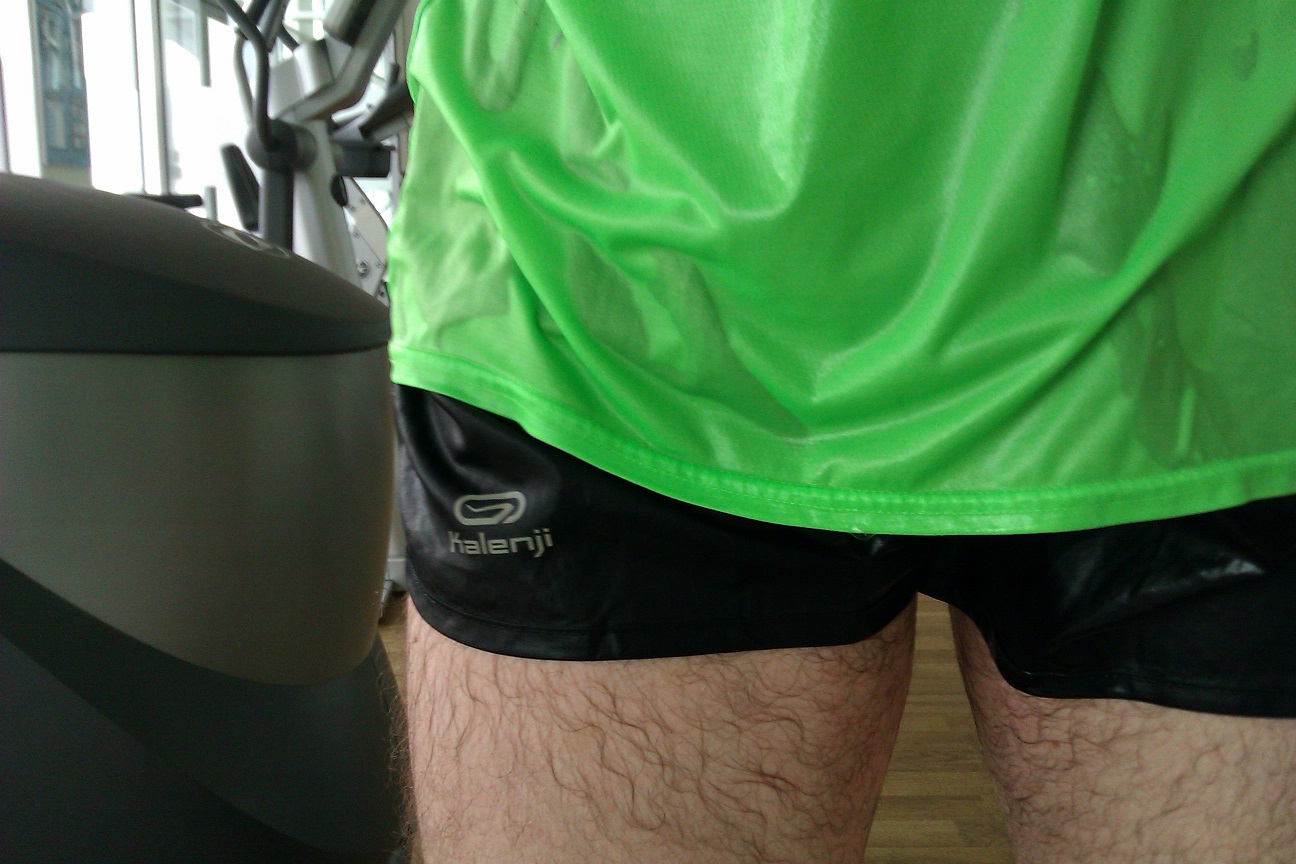 What you can't see is the pool of sweat on the floor or the puddles in my trainers...

I have to take a spare pair of trainers and two changes of clothes with me as everything is completely sodden after just 10-15 minutes, and that's with the air conditioning on full at 18C.

I had my first session on Tuesday which included a complimentary free hour with a PT (which was weird, as it was a guy I went to high school with. Thankfully he's not the tosser he was back then), and I just started feeling the muscle aches yesterday afternoon. Today, I feel like all the muscles in the the lower half of my body are as tight as a fully stretch rubber band... Despite many years of claiming not to be interested in gyms, I actually quite enjoyed it!

Back to it tonight - hour in the gym, 20 mins in the pool, and a quick soak in the jacuzzi to relax

Contributor
I was conned. Despite being promised that the chorus would not be doing any dancing in our upcoming show we are now learning "movements"; they seem remarkably like dancing to me. However, I must say that they give my legs a pleasant, warm glow.

Contributor
Ankle still shafted. Looks like I'm taking my crutches on holiday with me. Anyone got advice for getting on a plane with a couple of large sticks?

AFAIK you'll need a doctors sign-off for the airline to allow you on a plane with them. They need to ensure you're safe to fly and able to jump in an emergency landing or something along those lines.

Contributor
Already checked with easyjet and it seems i should get priority boarding and extra leg room so they can stick me out of the way. Ideally want to go without them but will depend on if I can walk or not tomorrow.

Staff Member
I still run like a bastard everywhere.

Probably going have to slow down soon as I'm over half way now.

I'm not sure I will achieve it as my age is a big factor now - it gets harder every session to maintain what I was doing a month previously.

I am currently about 2 minutes off, which doesn't sound a lot, but it means I will have to increase my pace by 5% and when you're already at your limit, that's a big ask.

Still, one can but try.

I am currently running 10K every day to get my legs used to the distance and then I will start to increase the pace once I can comfortably run 10K every day without a day off.
M

And exactly how does a bastard run?