Staff Member
This one?

It's almost 20 years out of date now but highlights just how complex it was. 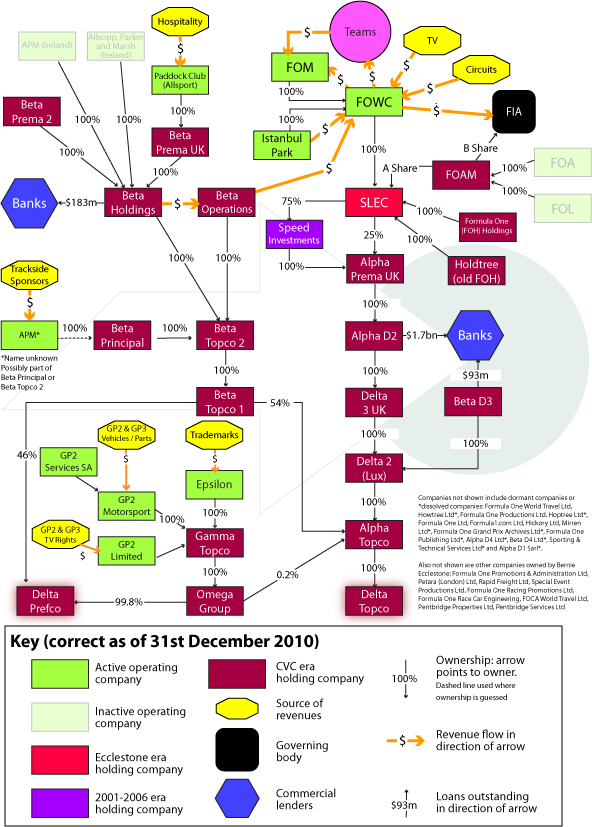 the problem is that Bernie used to get deals done, Rich Energy so far has never achieved anything whatsoever. With all due respect to publicans and fitness instructors, Bernie would never use a shell company managed by a publican and a fitness instructor and besides why would he want to sponsor Haas? And as per the chart shown above in deals involving Bernie there was always a lot of money moving around, with Rich Energy so far there is only a lot of words.

Besides if Bernie really wanted to put some dodgy money (and I don't think that he's got much to launder, I think that in purely legal terms he's totally legit) back into circulation he wouldn't use a company registered in England and headquartered on a residential street in East Putney (you can check it out by yourselves, the registered address is 5 Manfred Road, London, England, SW15 2RS).

Contributor
With the financial turnover that occurs in F1 I would have thought that a rather poor salary.

very poor salary and not very safe job I'd say

besides, is Rich Energy's role as title sponsor for Haas confirmed?

Having occasionally seen Pietro race I don't think he is as good as Emerson or even the very much under-rated Christian but he has shown some one lap speed.

Is there any reason that Haas are giving Fittipaldi a run ? Does the team have Brazilian or South American sponsors to please because there was talk about it when they first started that they don't necessarily need a US driver

What happened to that Indian development driver they had - the one who Ferruci bullied and racially abused?
I

I have feeling that Grosjean could be the one left in cold. His temper is notch above mine own. Calling boss on mobile and giving him s*****t talk full of expletives is not a good career move, unless you have death wish.

Il_leone said:
Is there any reason that Haas are giving Fittipaldi a run ? Does the team have Brazilian or South American sponsors to please because there was talk about it when they first started that they don't necessarily need a US driver

What happened to that Indian development driver they had - the one who Ferruci bullied and racially abused?
Click to expand

Copersucar? Just speculating. Pietro was born in Miami and I think he lives there. The name Fittipaldi should bring some Brazilian sponsors, specially now that there isn’t a Brazilian driver on the grid

Well Mclaren have Brazilian sponsors although they've got themselves in a mess with Petrobras about the fuel spec. I would like to see Alexander Rossi giving a go

someone does a review of the f1 Netflix series episode 1 & Gunther Steiner is vicious,

even if I do agree with grosjean stop whinging. 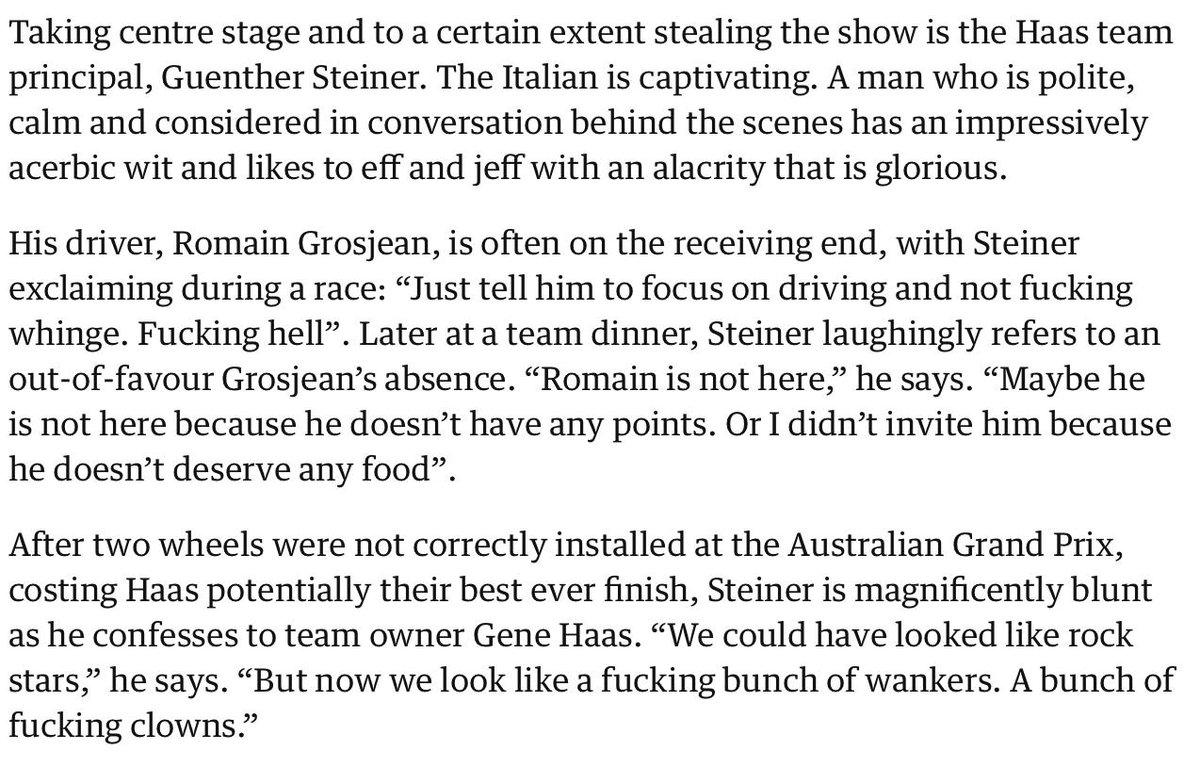 Contributor
The Haas/Renault bitch fest has been gradually brewing over the last year or so and Gunther Steiner has basically told them they wouldn't be complaining if they weren't so crap.

Got to love Steiner.

what has happened for Haas, did Melbourne suit car & flatter them considering the real pace of the car, is it the tyre issues because they have gone from the 4th fastest car & finishing 6th to in baku finishing 13th (grosjean 16th pre DNF) in 8th fastest car having scored no points since melbourne

Apparently the Haas car can't seem to make the tyres last . Are we now saying the dangers of being closely affiliated to Ferrari ? It appears the tyres only work for the top 3 cars

haas very weird currently. because qualifying best of the rest consistently. in the race to paraphrase Lewis in 2013 Spanish gp "ive just been overtaken by a Williams" according to crofty in commentary, the tyre issues are like cooking fish fingers burnt on outside & frozen in middle 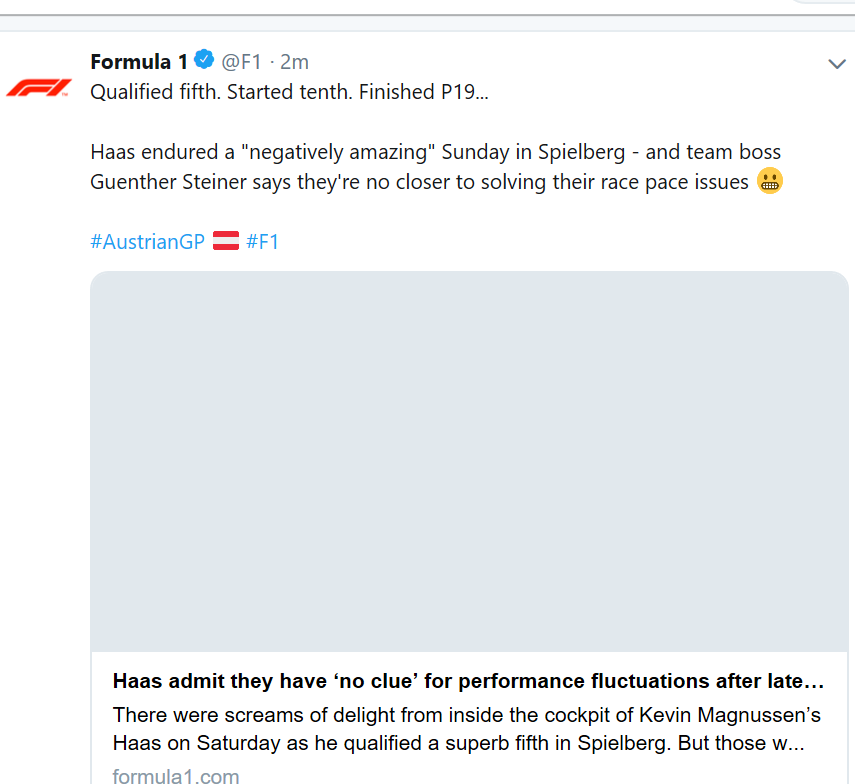 well shows what happens if you simply copy what Ferrari did and have no brains behind designing the car. The tracks they got points at

is this correct. because its so beyond parody which that account has been for months that sounds like someone hacked them. as ive said for while Williams finally got lucky dodging a bullet with them in Mexico 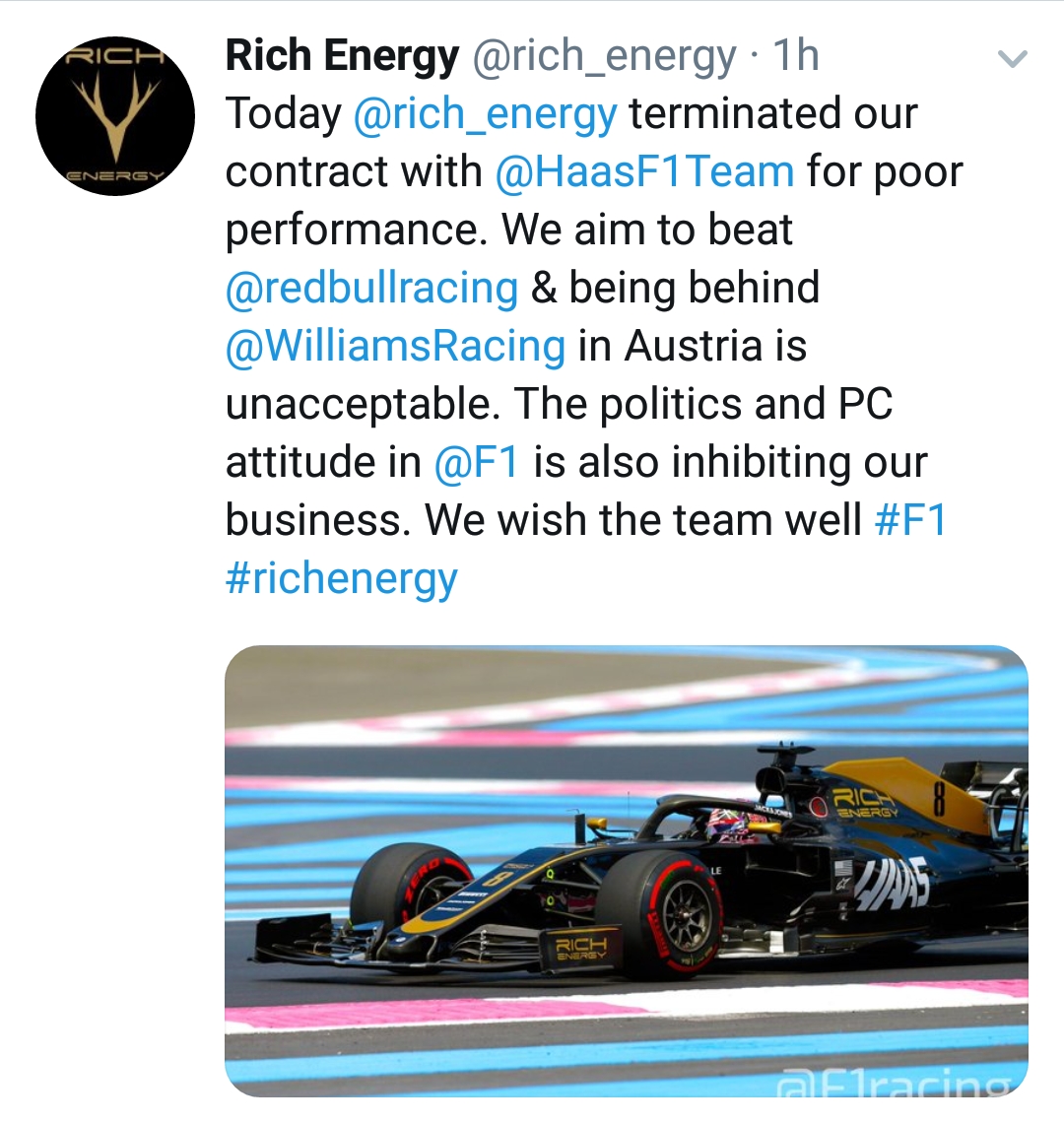