Just been on twitter on come across this GPDA open letter. thanks to will Buxton bringing my attention to it, GPDA published an open letter making clear that all drivers were unhappy. Addressing it to F1's stakeholders, followers and fans, the GPDA chief figures, directors Jenson Button, Vettel and chairman Alexander Wurz said that the time had come for action to be taken and a new governance structure put in place."The drivers have come to the conclusion that the decision-making process in the sport is obsolete and ill-structured and prevents progress being made,"

Which I know at the end they say that this open letter is intended in the best interests of all and should not be seen as blind and disrespectful attack. I think it could be a threat & is a definite shot across the bowes considering 3 people named are 2 of experienced drivers 16yr veteran Jenson Button, 4x champ + ferrari driver Sebastian Vettel & GPDA chairman Alexander Wurz but im not expert on this because nearly 2 decades before I started watching f1 but could this turn into the fisa/foca war or am I way off 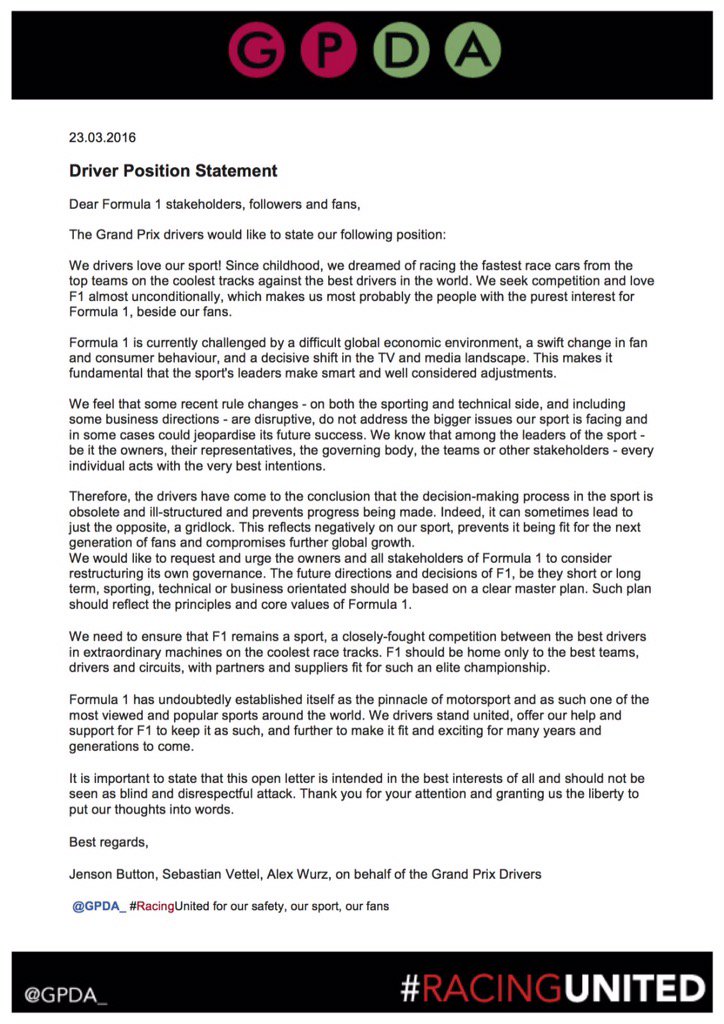 Should be an interesting response from the F1 power brokers, about time someone within F1 stated the bleeding obvious.

Valued Member
The public response will be interesting, but I am wondering about the behind the scenes response. This is the equivalent of every one of us writing an open letter to our boss, all of the customers and the people who own the company and pay our wages saying "The company is run by a bunch of idiots who have no clue what todays world is really like. Get out the way and let someone who is not a fossilised relic do the job". Doesn't go down well at the best of times, personally doesn't go down well at all anyone who is in a pay bracket of tens of millions of dollars a year saying they know what the real world is like...

My problem is that even though they may not have done it in the right way, it is the truth and may actually get the fossilised relics to sit up and pay attention for a change.
Last edited: 23 March 2016

The art of a good knifing of your boss is to make sure you have a master plan that they can buy into.
It's easy to say it's broke; but without stating what you believe will fix it you'll (at best) be ignored.
... and always say you'd like the opportunity to discuss your ideas, in detail, on how to improve for the future.

To me that just says you've ****ed it up; its broke; now do something to fix it.
You don't win any brownie points that way...

That's like saying the life expectancy of your average Dodo is an 'issue'.

It seems the drivers have fallen into the trap of wanting to speak, but not having the right words to do it.
When that happens it is usually best not to open mouth in public until brain is engaged.

The final sentence is, also, almost an apology - 'Thank you for your attention and granting us the liberty to put our thoughts into words'
Standard reply might be - 'Thank you for wasting my time, now **** off to back to your pampered lifestyles and get on with doing as you're ****ing told'
Last edited: 24 March 2016

Ah yes of course. Drivers should put up and shut up about about their opinions on how how the sport should be run. What do they know? They're only drivers.

They should leave it to us on here who are far more sensible and knowledgeable about how to fix F1.

Oh no, I would expect any of us on here to get the same standard reply from those on high.

We waste our time on a much more frequent basis, just with a more limited audience.

Valued Member
Bearing in mind I do not know whether the letter was a first attempt by the drivers to get their point across, or simply the latest in a long line of efforts, I applaud it.

AS they have a vested interest in the success of the sport, they should have a voice, and be able to express their views. That they are pointing out that there is a problem which needs addressing, without specifically identifying a solution is no problem for me, as once an issue has been correctly identified and acknowledged, it can be addressed.

The fact that an official body has now publicly pointed this out, rather than just the media/fans throwing rocks from the outside, it stands possibly more chance of getting something changed.

I don't hold out much hope to be fair, as there is a history of greed before speed, and vested interests and political wrangling seems to be the weapons of choice, but at least a group from inside the sport has pointed out the cluster****.

Hopefully they can sort something out before I stop watching in 2019.

You bet the drivers have a vested interest, Jim Clark was on £1500/annum retainer plus a prize money percentage, even after he won the WDC first time,Jackie Stewart was the first driver to realise their "worth" and also the first to make £1m/annum. Bernie and a few team principles may enjoy a return to that era of pay, whether Max Verstaffen and his new up and coming mates would is a different matter. Jenson and Fernando would retire laughing

Staff Member
Premium Contributor
It's often forgotten when we talk about today's drivers taking their cash and running off to Switzerland or Monaco that drivers in the 60's were doing much the same thing to protect their income. Jim Clark lived in Bermuda to avoid paying tax on a large percentage of his wage.

That said though, the drivers were a lot less restricted in their careers. Clark drove in pretty much every series on offer and won most of them. In fact, it wasn't really until the early 80's that this stopped. Until then, drivers would routinely compete in F2 alongside F1 or in some cases, drive on both sides of the Atlantic in the same season.

If the drivers want to make themselves the stars again then they need to look to other series to boost their reputations. Just look at what Le Mans did for Nico Hulkanburg last year for example. There is no denying that F1 is the biggest game in town when it comes to earning power and star attraction for drivers. Where an F1 driver goes then interest is sure to follow. They need to get clauses written into their contracts that allow for them to race in other championships. Think how many more tickets a one off race by Hamilton or Button at a BTCC even would sell. There is a risk to that of course, somehow I don't think a driver like Jason Plato would love to show an F1 star what being wheel to wheel in the BTCC is all about and for those with longer memories we can remember Mansell knocking another chunk out of his reputation. But, if these guys are real racers as they claim then why not get themselves out there an prove it. If memory serves, I think the last current F1 driver to attempt the Indy 500 in the same season was Teo Fabi in the mid 80's. There are opportunities all over the place.

cider_and_toast said:
Think how many more tickets a one off race by Hamilton or Button at a BTCC even would sell. .
Click to expand

I think the same thing gave our Nige a bit of a headache!!

Staff Member
Premium Contributor
As I put in the next line after the quote you mean?

Valued Member
My memory is ok, its my attention span that requires work!!

Premium Contributor
Help is at hand, we will all be able to see the British GP and bits of the rest.

Do the FIA and Ecclestone think that giving less action to fewer viewers will raise the popularity of F1?

Staff Member
Premium Contributor
I don't expect he does but the new TV deal will increase the revenue which is all he gives a monkey's about.

Well Done to Bernie, having now proven to the world that men, even as ancient as he is, are capable of multi-tasking.

In one fell swoop he:
a) pens a letter to the Drivers agreeing with their sentiments and offering his services to aid their cause.

b) pens an agreement with Sk... Sk.... (no, I can't even type it) to remove live F1 completely from terrestrial tv in the UK.

Multi-tasking, btw, is the ability to do more than one thing at the same time, but generally both very badly.

Yes, it is!
This is an undeniable truth that only women refuse to accept. Last bit typed while hiding behind sofa!
Last edited: 24 March 2016

As mentioned by ramilas1, this is Bernie's response according to the Beeb.

Well, I'm impressed with Bernie's ability to politely acknowledge their concerns and then belittle the drivers with faint praise:
"It is easy to analyse what is wrong so why not think and come back on this. At least it is better to think before you wish."
I particularly liked the closing shot pulling them up on their grammar... genius put-down.