We arrive after a 7 hour trip at Silverstone at 2pm to be directed into a car park, which looks suspiciously like a muddy field with minimal temorary roads. Turns out our campsite is 1.25 miles away and we have to carry all our kit by hand and by sack barra through the soft muddy fields and lanes. The only plus is the sun is out and its a fine Summer day.
At 5.30pm we have already done two trips there and back totaling 5 miles, ladden down like a pack horse. I am no olympic athlete, my pal is over weight and my dad is almost 70. We are totally shattered and we still have one more 2.5 mile round trip to do. And just to make me feel better my tent fiber glass pole cracked on assembly. My tent is now staying up with the aid of a few tent peg splints and some duck tape.
We decide to build the BBQ and have some food and beer before the last trip.
At 10.20pm we are finaly set up. Its dark. We have walked 7.5miles each. A total of 22.5miles between us. And the good news is we have the same to do again on Monday.
Much Beer and G&T was consumed on that Thusday evening.

It started raining around 5am waking me up, when we emerged for our customary breakfast 'the Silverstone special' (a roll with bacon, fried egg and black pudding on it) the ground was very squelchy. Little did we know the rain would not stop untill 10pm that evening.

The noise of the F1 cars in P1 brings everything into focus. That is why we are here. Despite the rain and cold you can't help but smile and cheer when Jenson and Lewis scream past you for the first time.

Fridays are generally practice and qually sessions, we normally would take the oppertuninty to walk around the circuit on Friday. But given the persistant heavy rain and the massive effort yesterday we stay put in the Stowe grandstand all day.

Back in the campsite, the ground is now much worse. Water is just sitting on the surface. The water very quickly turns to liquid mud.

BBQ fired up under the gazebo, much red meat was consumed and beer and G&T drank. Then a miricle, the rain stopped. Its already dark so time to launch some Chinease Sky Lanterns haha. Great Fun. Got to bed around 2am. Oops.

Woke up with a much deserved hang over.

V drunk last night. As such we are a little late getting in the circuit just after 10am. When you here F1 cars in P3 without being in a grandstand you feel a sense of urgency come over you.

The rain is showering heavy of and on all morning. We all know what happened during qually with the delay. I have to say the fans spirits despite the weather was very high. We were all doing mexican waves and stamping our feet. When the marshalls came out to sweep the track dry the crowd were all chating sweep sweep sweep sweep. Very funny. They got a huge round of applause as they went off.

Qually again was brilliant so hard to predict as it has been all year. Off course most were disapointed with the Mclaren poor showing. Particuarly as Lewis had looked quick in P2.

The support races were fun again disrupted by rain, but I think everyone is getting used to it by now.

Back in the campsite the rain has made the mud much worse.

Bit of an earlier night as the GP3 race is 8am tomorrow.

Again more showers in the morning, but the GP3 GP2 and Porsche super cup races are brilliant. The F1 then has a 2 hour build up with driver parades Red Arrows Grid girls flag walk etc.

Then the moment the whole weekend is about, the race. Lewis and Jenson failed to deliver much from 8th and 16th and Diresta never even made it to corner 5. Even though the brits let us down it was great fun watching Webber case down Alonso at the end, brilliant move around the outside of the corner. A very popular win he got a massive cheer from the crowd.

The race finished and the track invasion they had warned everyone on the big screens was an offence kicked off and was quickly rebranded a 'track walk' and the gates were opened for all. Haha.

I scurried off to the kerbs on Stowe corner and managed to find myself some F1 marbles. Result. I am going to mount them in a glass case labeled 'Jensons Grip' haha.

The sun came out and for a while it was actually hot. The Murray tennis final was put up on the big screens and life was good.

Back in the camp site we go about trying to eat all the food and drink all the drink we have left whilst watching tractors pull cars and campers out of Woodlands campsite. The field is now pure mud where the grass 'road' used to be. Its almost impossible to walk in.

The rest of the sky lanterns are launched and we make the most of the evening.

We decide to get to the car with a lightish load each and then try and get the car as close as possible once we are out the car park. In the car park I see a 4x4 with all 4 wheels spinning in deep mud going nowhere this could be bad. I need not of worried we had parked just 4 feet from plywood boarding used as a temporary road. We push the car onto the road and we are away.

At the exit of the car park a 17 year old kid tells us we cant go to where we are camped and we must carry everything by hand. As soon as he moves from the front of our car we rip past him and head down the muddy lane to within about 300 yards of our camp site.

Even so after getting up at 6.30am we didn't hit tarmac roads untill 10am. 7 hours later we are home. Shattered.

In summary the racing was brilliant. The weather was terrible. The campsite was a joke. The emergency plan of making people park 1.25 miles from the camp site was criminal. I love F1 but I won't be going back to Silverstone anytime soon. I fancy somewhere dryer for my next race visit Abu Dahbi perhaps.

A mixed weekend with good bits and bad bits.

Some photos from the weekend. 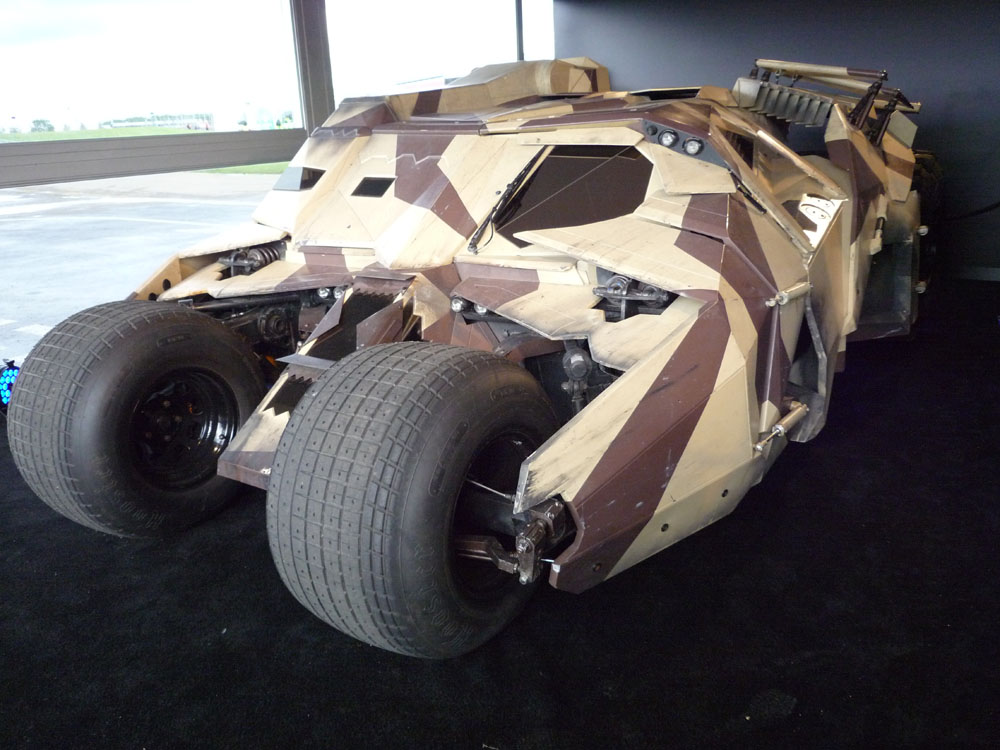 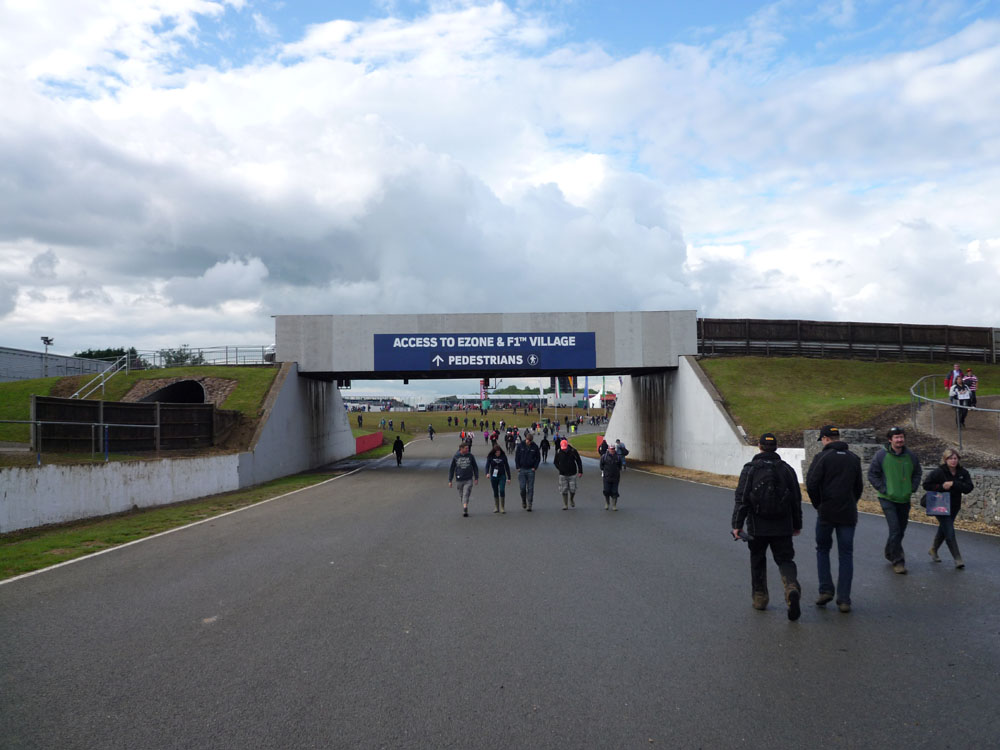 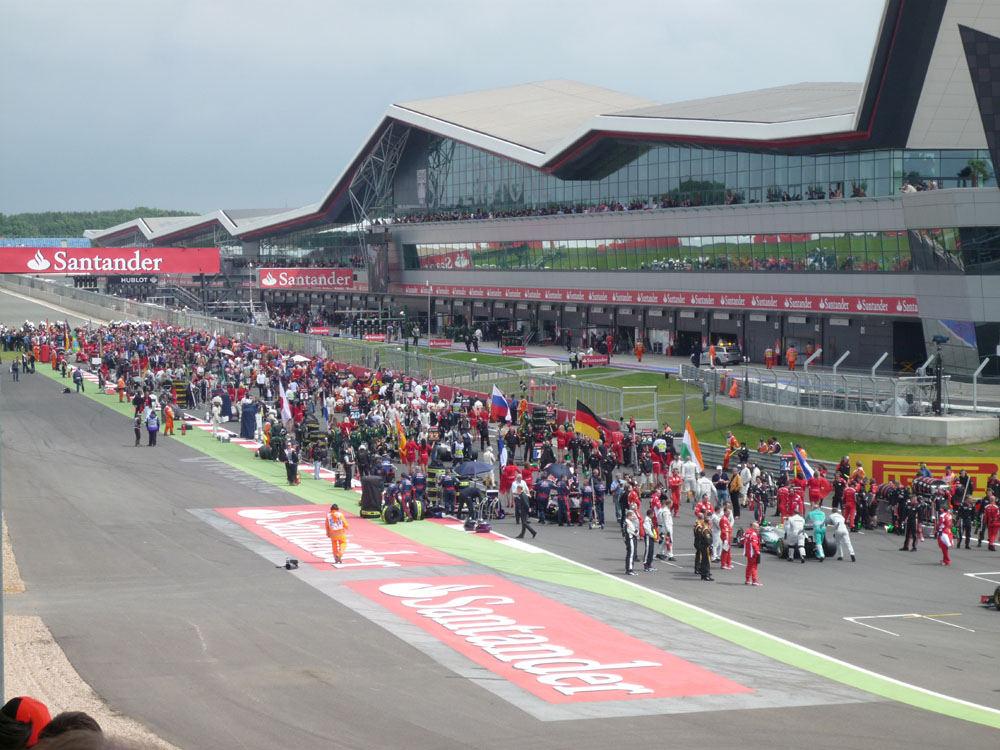 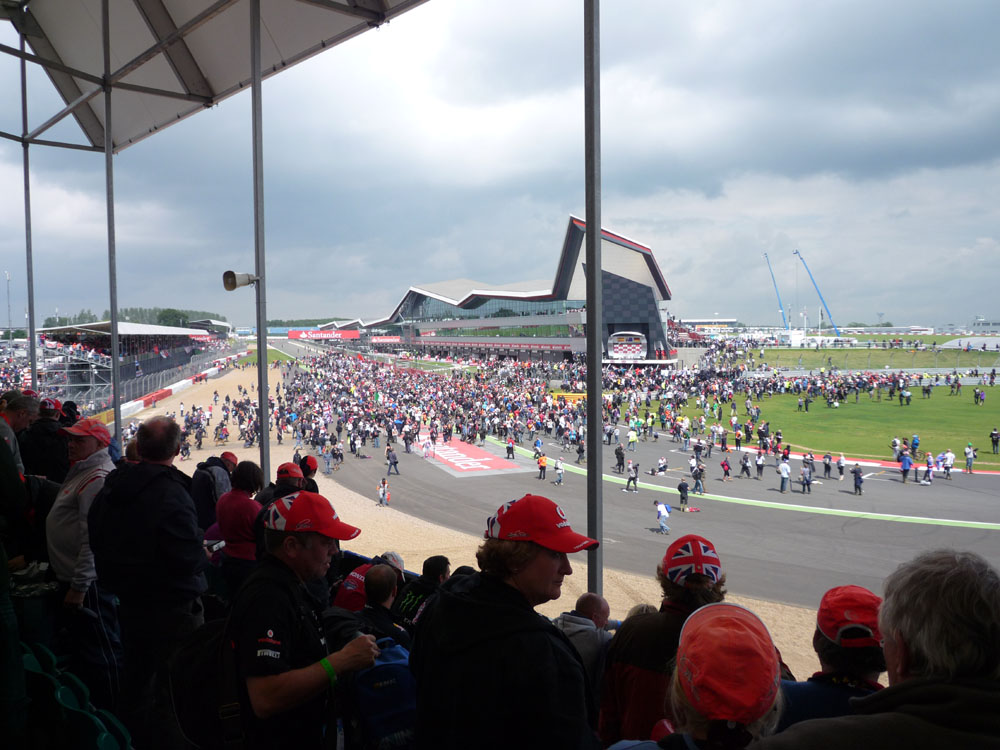 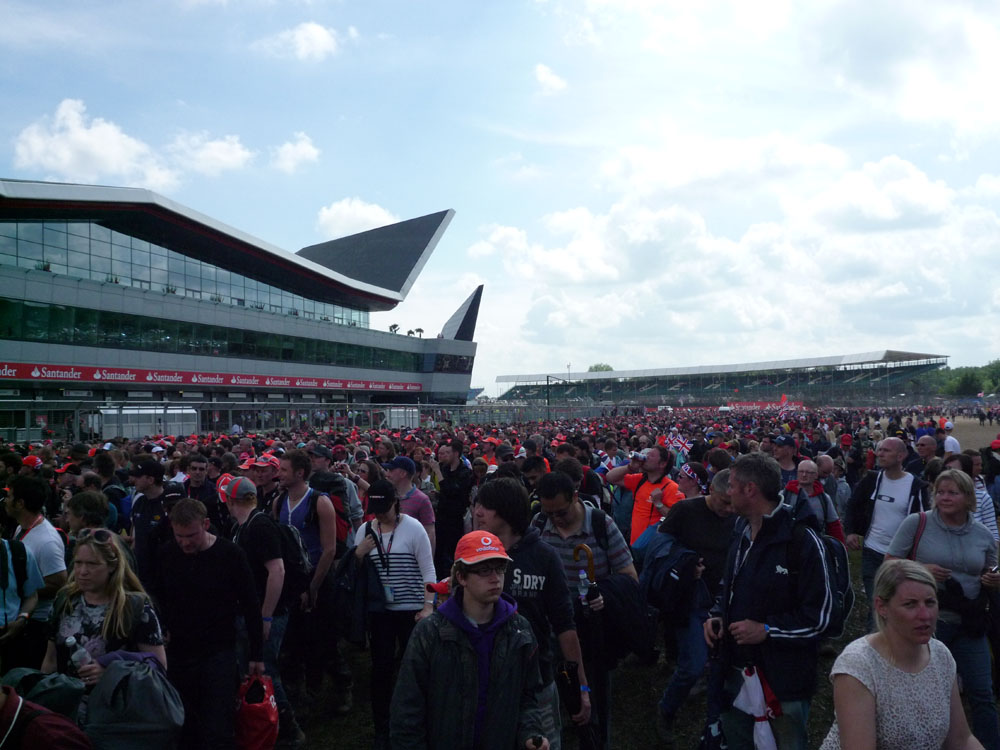 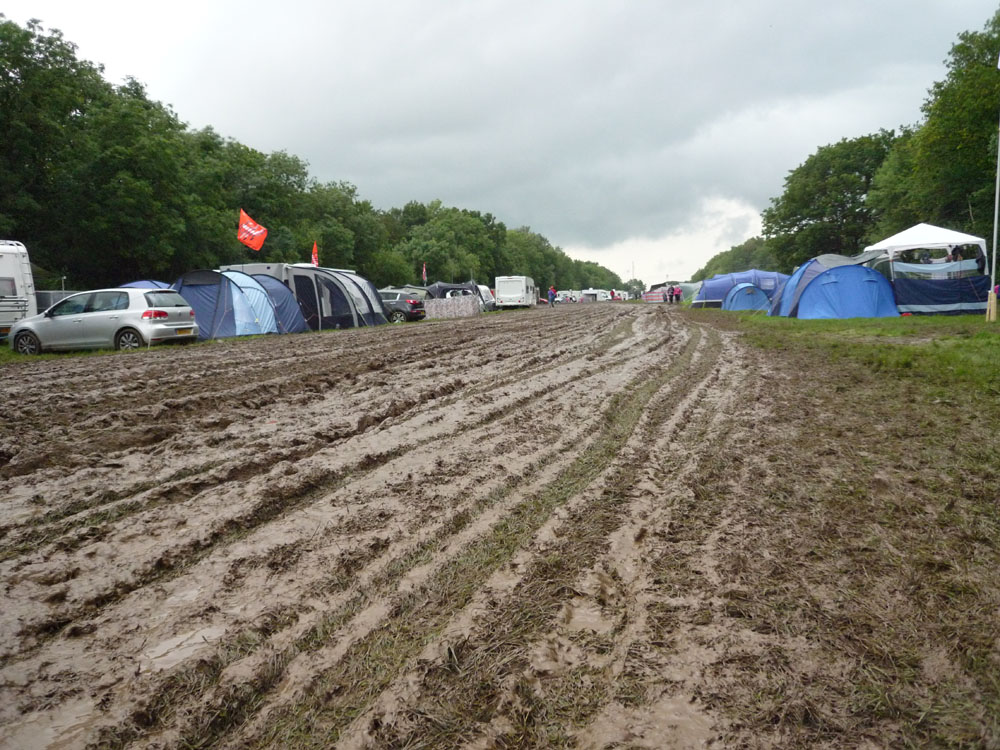 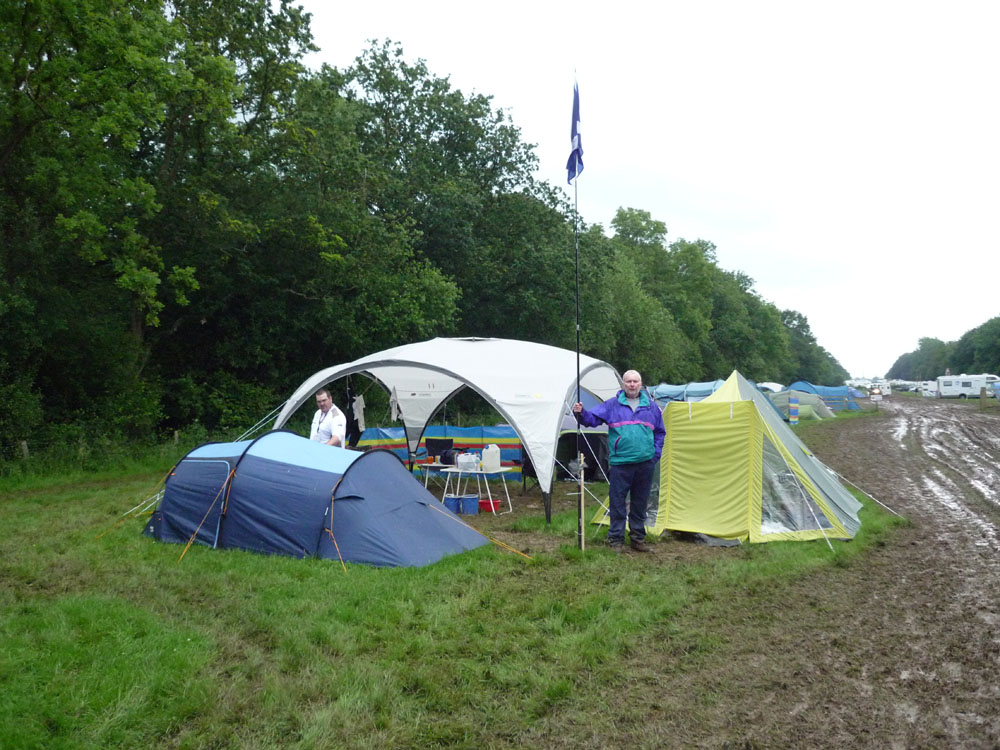 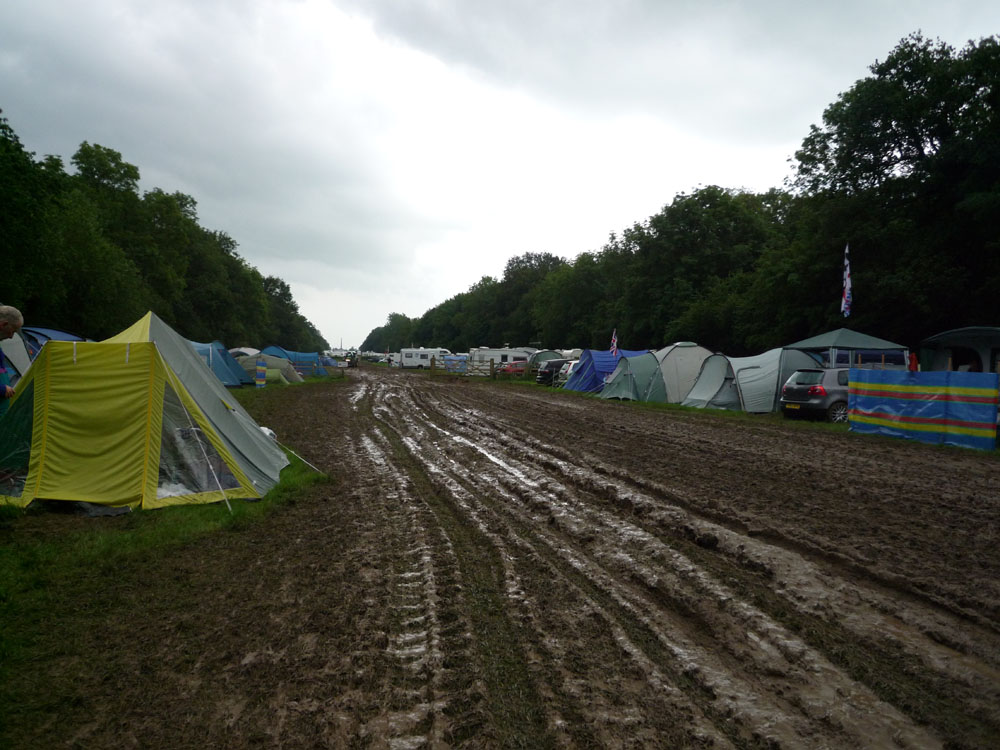 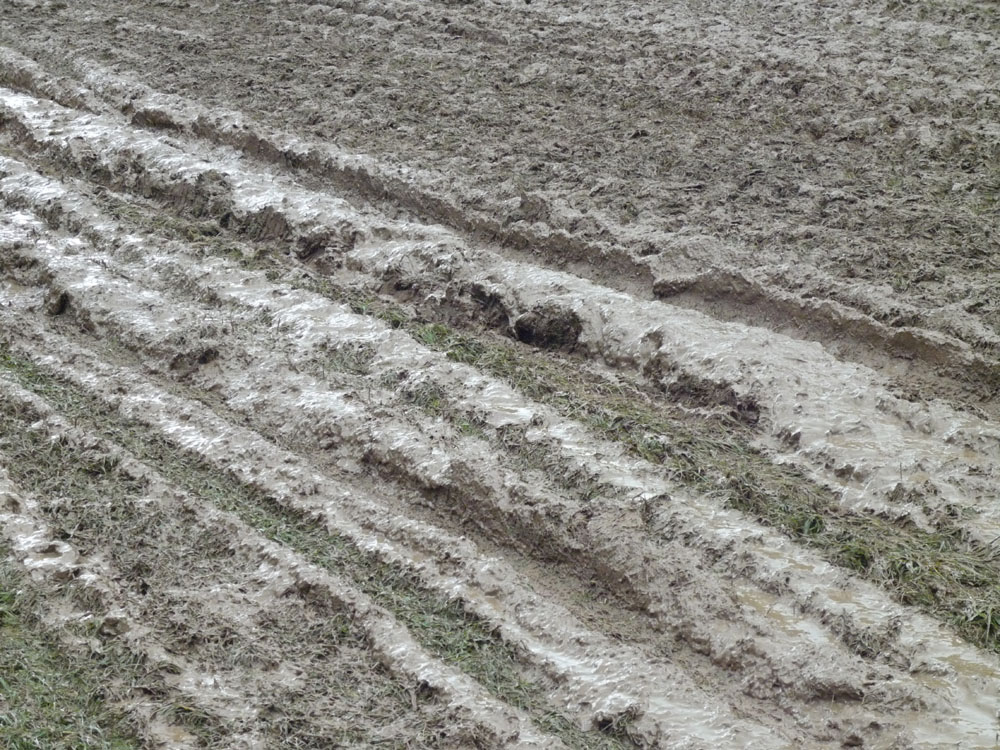 Contributor
That pretty much sums up my weekend too apart from being told to not bother showing up on Saturday (as a general parking permit holder). We reluctantly capitulated.

Nice write up and some good photos of the quagmire! The good old British weather managed to wreck most of the weekend which is most unfortunate for anyone going for the first time. Usually all the good stuff you've written about far outweighs the bad but the rain rain RAIN really made a mess of well, everything this year.

Contributor
I can't help myself, I still think I'd prefer to go to this GP and camp than not....

Amazing what a warm bed and envy will do for you... Fortunately I have a BMW GS, so I may be able to bike it in

Thanks for the write up, that's definitely a lifetime memory.

Even though the weather was crap, it still sounds as if you've had a great time

. Makes me want to save up and go to a race myself soon!

Greenlantern101 said:
I scurried off to the kerbs on Stowe corner and managed to find myself some F1 marbles. Result. I am going to mount them in a glass case labeled 'Jensons Grip' haha.

Sounds like you had a great time.
The photos alone had me longing for a shower - I don't think my OCD would have handled that weekend!

Some great photos! Brings it all back...well except the blue skies.
You have some very good descriptive passages. Love the marbles comment

Where would you say is the best grandstand to observe things from? (assuming I will go again one day!)

Dizzi said:
Where would you say is the best grandstand to observe things from? (assuming I will go again one day!)
Click to expand


Club Corner is where we were. In my opinion the best seats in the track. You need to be carefull which seat as to far to the right and you can't see the pits or the end of the straight. We were around Row F seats 285. Perfect. You don't want too near the front as you will get wet if it rains Row E-K would be my recommendation. And Seats 320-220 will give you the best view of the pits, straight, vale, stowe, club and podium.

Becketts you can certainly see more track, but in my opinion you see to much. Its almost to hard to follow and knowing where to look next. Also the stand is very high and a fierce wind blows straight through it. Brrrr. If Club was sold out though Becketts would be my second choice, but you will need your long johns on.

Stowe is cheaper than club but has no roofs. Almost as good as club but with no pits view. Pretty miserable when it rains. This is where we were in 2011.

The stands on the international pit straight are a waste of money, you can't see much other than the pits opposite and guess what half of them are so low you can't actually see into them. Idiot design.

Luffield is to slow.

Farm, Village and The Loop you can see easily from Becketts. So why not sit at becketts.

Premium Contributor
I was sat on the grass near Club. The views were excellent for only a £160 general admission ticket. Although we got up at 4am on Sunday morning we were still behind a mahoosive que of people. Next time I think I may fork out for a grandstand ticket or perhaps I'll go to Spa.

Friday in the main grandstand 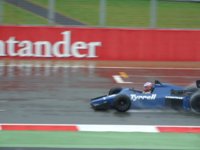 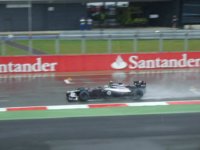 Our camping spot (it was covered by a Gazeebo as well!) 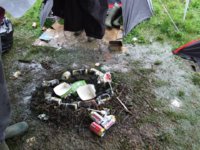 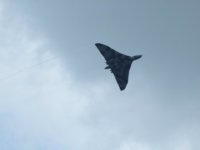 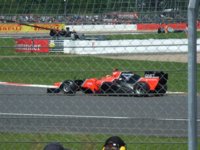 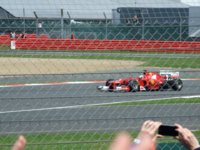