FB said:
Can we get an "over ripe" prefix for drivers that hang on just that bit too long?
Click to expand

Only if we can also have a 'soggy bottom' tag for drivers who are under-baked?

Valued Member
Did this for Rosberg: Massa's team-mates in F1 (7 of them) have had 400 podiums! 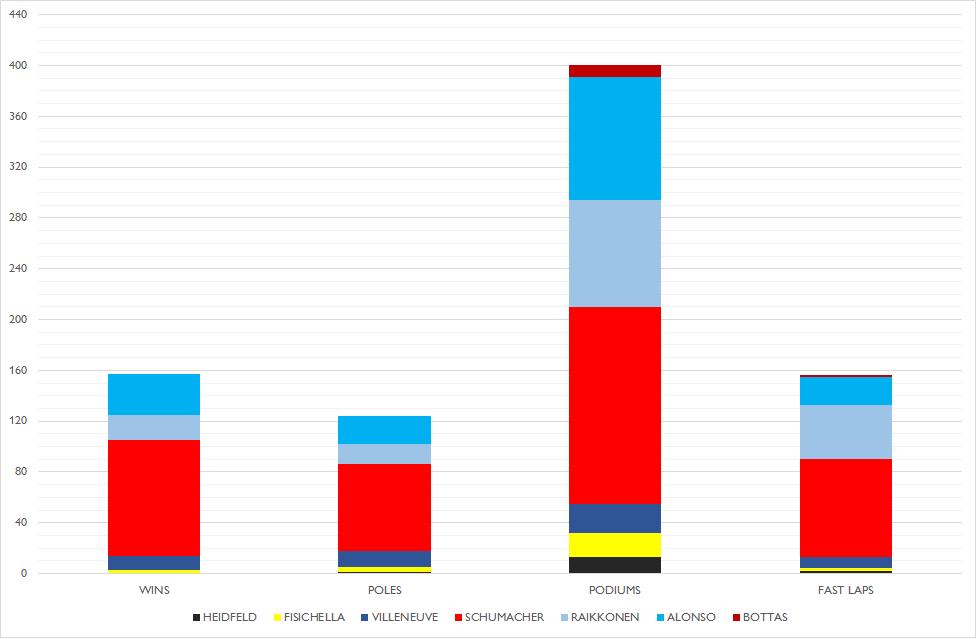 Massa is being supportive of Stroll. Probably it is part of his contract but laudable anyway

Premium Contributor
Another year of Massa being uncontroversial, predictable and basically nice. God help us all.

He should have retired in 2001, when he hit his peak.
He has been beaten by nearly every teammate he has had with the exception of Villeneuve (2005) and Raikkonen (2008) and now he's struggling to hold his own against a rookie.

Yes, 2001. 2008 proves that Hamilton is a highly skilled driver that McLaren wasn't on the level of the Ferrari and had Alonso, who was fast and consistent, been in that Ferrari Hamilton probably wouldn't have won the championship.

Contributor
What? His peak was before he started in F1?
I'm missing something.

gethinceri That’s the point. I don’t know how he got into F1 and how he managed to remain in the sport after being bulldozed by Alonso. He’s always been very inconsistent and crash prone. In addition to that he has become even slower than in previous seasons. Stroll is making leaps and bounds against a driver with 16 seasons under his belt.
Williams and Massa seem to be in a natural synchronicity when it comes to decline of form.
God bless them that Stroll is heading in the opposite direction.

Contributor
Rutherford I can understand your view on not wanting Massa in F1 anymore but I afraid the bit about him 'not deserving to ever be in F1 in the first place' is one of the biggest load of nonsense I've ever read on this forum.....and cookinflatsix used to post on here.

You're saying he's had two good races in a career spanning more than two-hundred? I'd up it to three which improves the ratio; Turkey 2006 was good too.

Yesterday, I was really annoyed with Massa and thus, very harsh. He isn't pulling his weight anymore and earlier in the week he came out saying Williams have to prove to him how much they want him. I wonder, if he has had a look at his performances of the past few years. He should prove that he is good and motivated enough to drive for Williams in the future.

It's disappointing to see the Williams team generally struggle for points in recent races and then even see one of their drivers putting in lacklustre performances. I'd rather see Palmer at Williams than Massa, because he at least puts in some effort.

Does Massa think he's entitled to a seat in F1? What a muppet...

Contributor
Massa's form between 2006 and 2009 was outstanding. World class. Then he got hit on the head by a large spring and came back to a team where he was completely sidelined and demotivated by another driver who knew how to play the game politically. He has never been the same since.

Alonso is still the only team mate who has 'demolished' him though. Given that he has had 4 world champion team mates I Don't think that's bad going.

Yes he needs to retire but a little bit of respect has been earned thank you.

Contributor
Neither am I!

Valued Member
I really hope he sees that his time in F1 is up but there are many drivers who just keep going. I think I posted a thread many moons ago about drivers who kept going too long.

RasputinLives said:
Rutherford I can understand your view on not wanting Massa in F1 anymore but I afraid the bit about him 'not deserving to ever be in F1 in the first place' is one of the biggest load of nonsense I've ever read on this forum.....and cookinflatsix used to post on here.

Agreed. When Massa first started he was really fast but erratic. In 2007, 2008 and 2009 he was pretty good. Even to this day, Massa is more "deserving" than some of the other drivers, if not by being fast, by giving Williams what they need to keep the team afloat.

RasputinLives said:
Massa's form between 2006 and 2009 was outstanding. World class.
Click to expand

I disagree and as I recently watched the 2008 season hightlights, I think he got extremely lucky that Hamilton always had to be on the limit in the McLaren. Kovalainen, as a reference, finished 7th, behind both Ferraris, both BMWs and a Renault.
Thus, I do believe that any driver with the qualities of Alonso, Hamilton or Vettel would have dominated that season in a Ferrari.
So, if Massa was world class at that time, the term 'world class' must have had been applied to a wide range of drivers at the time.

I actually rate Barrichello higher than Massa. When he drove for Stewart and Jordan, he was amazing.

Contributor
You are entitled to disagree. You're wrong but you're entitled