Valued Member
It would not be so good for Ferrari again for a number of years. The kilometers lead graph shows the fall of the prancing horse:
GRAPH: Kilometers led by Constructors 1980-86 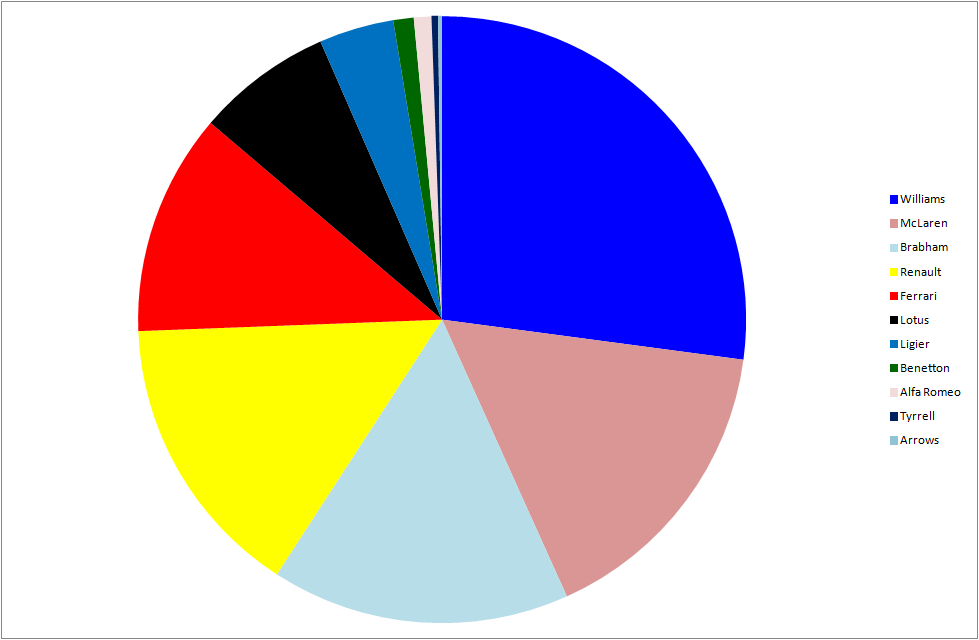 Instead, the period would be led by Williams, although McLaren's laps led tended to come at the end of races from 1984-86, and thus they're much closer to Williams when it comes to actually winning races. However, it is clearly still the time of the "garagiste".

What that garagiste increasingly didn't have, was a Ford Cosworth powerplant:
GRAPH: % races won by engines 1980-87 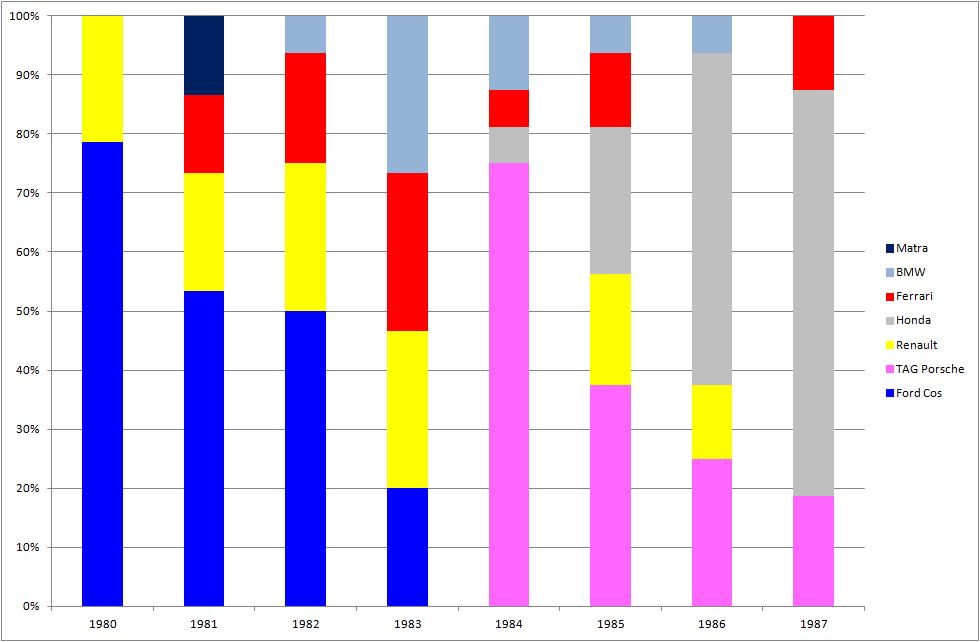 Ford Cosworth's 1980-82 performance is not too bad, but the DFV saw its last win at Detroit in 1983. The turbo era had arrived, with Williams-Honda taking on McLaren-TAG-Porsche, until 1987 at least! Renault's wins from those last three years came from Ayrton Senna and Elio de Angelis in their Lotus-Renaults. The winning drivers were these guys:
GRAPH: Wins by drivers 1980-87 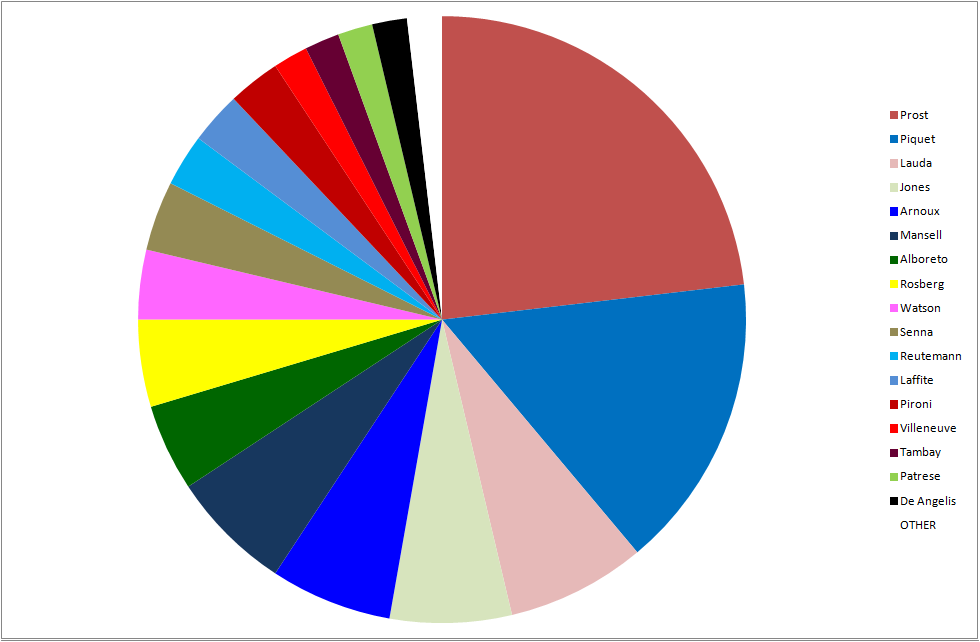 Senna's career was ready to go stratospheric when he joined McLaren in 1988. There were only two one-time winners (Jabouille and Berger) but plenty of drivers who only won a few times. All 11 of 1982's drivers won at least two Grands Prix in their careers. But the true stars of these years were Alain Prost and Nelson Piquet:
GRAPH: WDC positions of Prost vs Piquet 1980-87 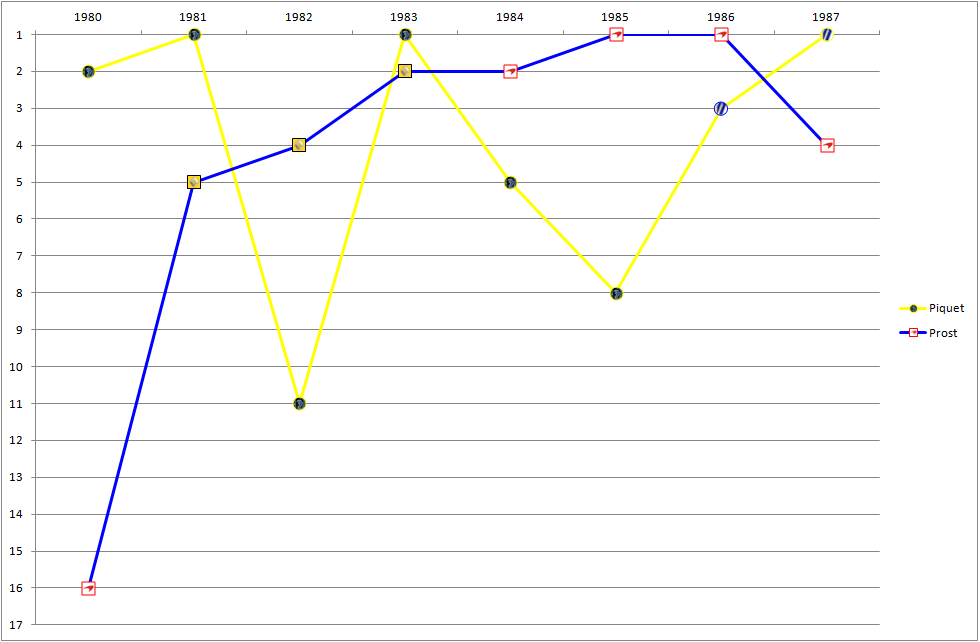 Piquet often suffered poor Brabhams, but won three titles from precious few opportunites. Prost, meanwhile, was Mr. Consistency both across and in between Championships. Surprisingly considering their lead in the wins category, they only finished 1 & 2 in the title once, in 1983, although the 1986 title was in part fought between the two; split by Nigel Mansell.

For 1988, they started to discourage turbos, which will bring us to our next era, dominated as it was, for good or for ill, by Ayrton Senna.

Contributor
Drivers who made a big impact in this period for me include Alan Jones, Didier Pironi, Keke Rosberg. No one who witnessed it can surely forget Mansell v Piquet at Silverstone in 85 (it wouldn't happen now, at least between team mates

Then, there was Villeneuve and the shattered Ferrari and the emergence of Senna and the untimely death of Bellof.

Prost and Piquet may have the numbers from this time, but they really are a small part of what I remember!

Valued Member
I think part of the reason they're not as fondly remembered as others is that they didn't stir the imagination, but quietly earned the sustained success that eluded the men on your list.

A good period in F1, beautiful cars, fat rear wheels, Prost vs Piquet, 1982 had 11 different winners & championship won with 44 points, Keke vs Elio for that 1 race, oh have a mentioned the JPS livery Lotus