Contributor
That's pretty awesome. My older brother has been signed up to the NSW RFS for the last few years (he emigrated around 10 years ago). They are pretty tough on their training before putting anyone in direct path of the fires. Are you signed on with them? What area were you working in?

Haas duo both over paid. They have not done crap to earn more than 1/2 mil

Premium Contributor
Do they get full pay for not racing ?

Really depends on their contracts, that's why there is considerable negotiation at renewal time, generally the income quoted includes all bonuses and a full race series, most drivers will lose their performance bonus, though marketing appearances over and above contract will help boost basic income. I wonder if the FIA will allow a bit of testing to keep the interest going for F1

Contributor
Does Latefi get a refund?

RasputinLives said:
Does Latefi get a refund?
Click to expand

Claire Williams is checking the small print as we speak.

cider_and_toast said:
Claire Williams is shitting herself as we speak.
Click to expand

Contributor
Does anyone know what they are offering Vettel to cover his overpaid situation? I wonder if the new contract is above, below or same as LeClerc's?

How much are F1 drivers earning in 2020 – and should their pay be capped? 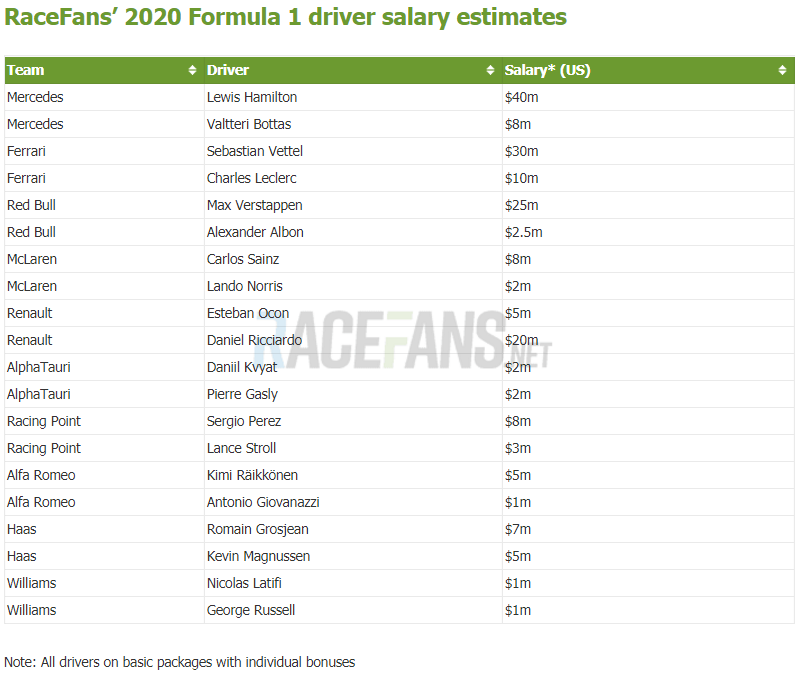 Contributor
IMO driver salaries should count under the team budget caps. That would help level the playing field for the lesser teams.

Contributor
That would see an increase in pay drivers as the 'lesser' teams would see it as a means to be able to invest more of the budget into the car. You'd effectively get a bunch of one car teams as their second seats were farmed out to anything who could pay for the ride or do it for free.

RasputinLives said:
That would see an increase in pay drivers as the 'lesser' teams would see it as a means to be able to invest more of the budget into the car. You'd effectively get a bunch of one car teams as their second seats were farmed out to anything who could pay for the ride or do it for free.
Click to expand

Agreed. It was best to move them and "principals" out of the budget cap.

Contributor
How is that different from what you have now? IMO Ferrari is the only team with 2 drivers of essentially equal talent that are allowed to race each other (at least until mid-season, when team orders can come into play). Mercedes says their drivers are allowed to race each other, but one is a top-tier talent and the other is mid-tier so there is no true competition. The same with Red Bull.

The number one number two thing is a completely different issue and exists because it's a team sport. Big teams would not take a pay driver on as their second driver because they wouldn't want to risk the teams championships, so they employ the best of the second tier. The smaller teams would take the gamble on one driver as they are not in the running anyways.

Contributor
I was talking about ALL of the teams and how counting driver salaries towards the budget cap could make the lesser (currently) teams more competitive.

the salary always have to outside of this. because 1 of the upsides of this budget cap is less pay drivers & more drivers in on merit like Formula E. but yes that way the best seats in B races will just go to the highest bidder

i know it was 175m reduced to 150m. i can see it going to 125m there was apparently already talks between the teams on this

Of course "pay drivers" get some money to themselves. Let's say Maldonado asks for $3M salary, but then PDVSA offers team 30M dollars only if Maldonado drives for them.

Or that's how I understand the concept. 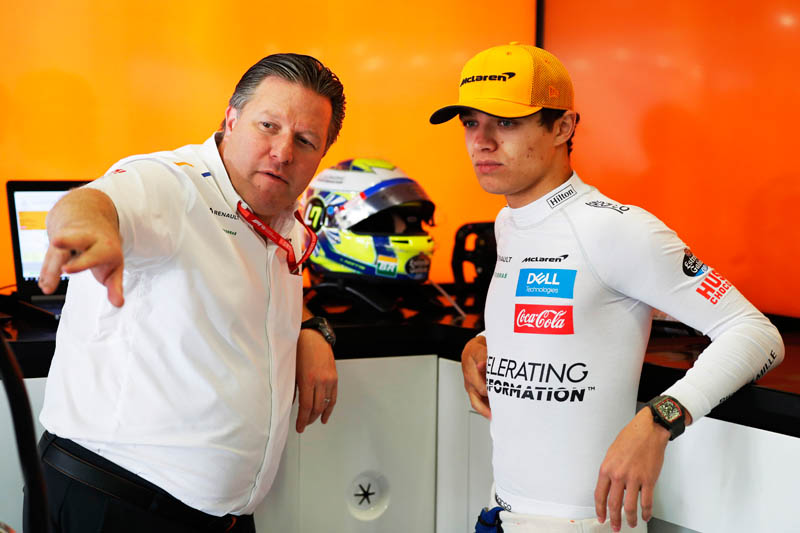 Brown: Engines and driver salaries should be included in budget

"He who is smartest, wins, whereas now it is he who spends the most wins," says Zak Brown as he calls for engine costs and driver salaries to be included in the budget cap.
www.pitpass.com

Contributor
What he says here just strengthens my view on why it shouldn't be included. They'll spend the money on the car and plump for less talent in the second car.