Does an F1 driver lose strength as they get into their thirties and fourties?

Contributor
The loss of strength and stamina is an unban myth; reflexes may slow a tad but not significantly.

jenov2003 said:
The loss of strength and stamina is an unban myth; reflexes may slow a tad but not significantly.
Click to expand


It seems that in sport, few venture into their fifth decade in sports with the exception of such sports as snooker, darts, lawn bowls etc.

Indeed, in football, I would say that the best players at that age are goalkeepers, suggesting that the reflexes are fine.

The only explanation is a decrease of stamina when the threshold into middle age is crossed.

jenov2003 said:
The loss of strength and stamina is an unban myth
Click to expand

Have to disagree with you there Jen.
Far from being an urban myth, it is a measurable reality.

I've been going to the gym since I was in my teens and once was running over 40km a week.

There is no way now I could ever lift as much weight, for as many repetitions, or run as fast as I could even 5 years ago.
Muscle size and firmness decreases significantly once over the age of 40.

Valued Member
Aren't most astronauts over 40?

teabagyokel said:
The only explanation is a decrease of stamina when the threshold into middle age is crossed.
Click to expand

At what age would you say middle age starts?


Brogan said:
Far from being an urban myth, it is a measurable reality.

I've been going to the gym since I was in my teens and once was running over 40km a week.

There is no way now I could ever lift as much weight, for as many repetitions, or run as fast as I could even 5 years ago.
Muscle size and firmness decreases significantly once over the age of 40.
Click to expand

Maybe for you Bro this true - but between the ages of 38 and 47 I was working as a jobbing gardener - I started off with ramps to get the machinery in the van, after a few months I could lift it all - 60 kilos was the heaviest - and that went on until I ceased being a gardener.

Since I have had a job that is very sedentary - have trouble lifting my coffee cup now.
C

You have to look at that ultimate test of strength and stamina, Boxing

Apart from a very few cases, males tend to peak physically before 40

Experience and mental agility may compensate a little though

Contributor
Going by Schumi's starts I'd say his reflexes still seem to be ok,don't know about his muscle firmness nor his boxing abilities,but I'm quite sure he's still a pretty strong gardener like you Jen

I don't think that F1 unlike other physical sports has that much of an impact physically, Handling G force is something the body trains to and everything else is ritual gyming to stay toned which a 40+ year old is well as capable of as a 20+ year old.

Maybe eye sight and the peripheral vision and that crud goes a bit......but seriously I think if we look at Michael, he is so fit and for the love of money hope he sticks around for a while yet.

FB said:
Aren't most astronauts over 40?
Click to expand

Webber is still in his thirties.
C

ecclestoned said:
Webber is still in his thirties.
Click to expand

Neither has any astronaut, technically.

Valued Member
The last man over 40 years of age to win a Grand Prix was Nigel Mansell in Australia in 1994, when his younger team-mate had collided with Schumacher ahead.

Not counting the 1950s (there were an exceptional set of circumstances there), these are the oldest Grand Prix winners: 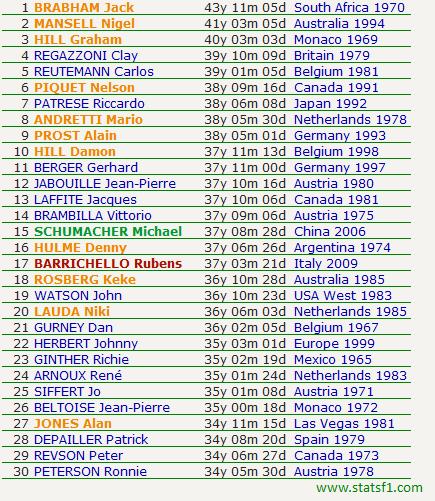 It has an effect, there is a reason why sportsmen retire, in most sports, at that age!

Contributor
This applies to the entire human race.As you get older your whole body effectively slows down and becomes slighly less effecient.Apart from racing my other hobby was weightlifting.
Even at 55 I could still lift the same weight as could at 25.But I was unable to do it consistently in competition over the course of a day.The problem was stamina levels as my body took longer and longer to recover from each individual lift.
Added to which the continued strain and pressures on my back and knees became unsustainable and then I needed a few days to recover fro my efforts.

Contributor
There was a lot of talk about Jack Brabham when he reached the age of 40. From reading the mags you would have thought that he had become a centenarian.

As a result at the next race there was a stooped man with dark glasses and a white walking stick who made his way with great difficulty onto the grid.

I heard that once you become 30 your testosterone level drops 1% every year.
So that means a drop of 12% with Schumacher, which could be the reason why he lost some speed thru time.

I'm not sure physical or mental strength is really the issue. can a driver maintain the strength and ability to keep driving fast in a modern F1 car? Actually, I think they could. The main problem I have found with getting old is all the mental baggage I have accumulated. Whether that is coming to terms with one's own mortality and how that affects one's relationships with family and friends (particularly one's own children) or with all the other things that interest us in life. F1 requires the utmost concentration and I think the baggage takes the edge off of that more than anything.

I would think that with F1 being as safe as it is then someone like Schumacher or Barrichello could carry on quite successfully into their 50's. After all, unlike boxers they're not getting punched in the head at every round. Having said that, there is one other factor to consider.

Every generation has the opportunity to benefit from studying those who have gone before and their accumulated knowledge. It stands to reason that if a young gun learns from a master and then innovates with their own intuition and learning then they will outshine their predecessors. Their elders will naturally become uncompetitive as the rising stars build further on the experience and knowledge that is passed down to them.

Valued Member
As a complete aside - Sir Steve Redgrave won his last Olympic gold medal in rowing (pretty full on muscle wise I reckon) at the age of 38 and then he said "Never again!!"

Valued Member
Not to get too Axle Tramp (sorry Axle

) but every time I look at the title of this thread I hear this song: