Staff Member
Unfortunately many people are still routinely quoting every time they post and in a lot of cases it's the post directly above theirs.

Sadly that has left us with little choice other than to selectively remove the function for those individuals.

So if the Quote link is no longer available to you, you know why.
T

Unlikely I know but to inject a bit of reasonableness to brogan's previous point, it often happens that one can reply to the latest post that one can see, but in the time one is typing the damn thing up, someone else inserts another post.​
The problem then for anyone else then reading through is that (if one obeys the "don't quote the post above" rule) one's post APPEARS to be referring to the one above, but it actually isn't, it's referring to a post some way up the thread.​
The only way one can avoid this in busy threads (like hot threads for the current race, quali or FP) is to quote the one immediately above, as you see it, so that one's post makes sense if or when someone sneaks a post in between.​
It may turn out that nobody else has posted in between, but at least it still makes sense to everyone (if one has quoted the post to which one is referring).​
​
Couldn't agree more though about the point concerning replying to one specific part of an "article" post - if you want to do that then delete the rest of the quoted post except the specific bit you're replying to. Simples !​
​
Incidentally this is not a hot topic so just on the very unlikely off chance that someone else has posted in between, I'm referring to brogan's post of "yesterday at 14:54"​

Staff Member
I agree that on very busy threads posts can sometimes be out of place by the time they are posted.

There's no reason why someone can't edit the post immediately after to reference the post with a small quote though.
Or even use the new tagging feature.

The main problem at the moment is this:

And so on down the page.
It just becomes a chore trying to read it and really is completely unnecessary.

The other main problem is people doing this:

All we're trying to do is reduce this behaviour to make the threads easier to read by cutting down on duplicate content.
M

Contributor
It ain't rocket science bro I think the problem is the people who are still doing it haven't read this thread, maybe a notice that has to be acknowledged is in order..

Staff Member
I agree it's not rocket science so why are some of those who have actually posted in this thread or read it still doing it?

Contributor
...but there would be no way to select which 500 characters. I think Bro is right in that common sense is the preferred option but for those with none, enforcement and education is the only way.

Staff Member
I'm not going to bastardise the quote function for the sake of a few.

I understand this thread may have pissed off a few members (or more than a few) but my job is to keep the site running smoothly so if I ruffle a few feathers in doing that then that's something I can accept.

Contributor
I think the tagging feature will help, as I suspect a lot of block-quoting goes on when poster A wish to address a specific point raised by poster B. I think the selective quote option withdrawal may encourage the worst offenders to tag instead...

That would require a serious change to the entire user-interface for the quoting feature as well as validation for the form input. It sounds easy, but to do that properly is a fairly weighty piece of UX and development work. I think you're flogging a dead horse on that.

Staff Member
As we have maintained all along Road of Bones selective quoting of posts isn't a problem and in fact it's an important part of how a forum functions.

But as we've seen, some just quote the whole post to respond to just a small comment within that post and that's what causes the problems.

Hopefully over time the tagging functionality will replace some of the alert quoting which was going on, and which frankly was becoming a problem.
When there is more quoted content than actual content on a page then something is clearly not working properly.

Quoting selected comments or even posts further up the page won't then be an issue as threads won't be littered with quite so many quotes.

Contributor
I think R_o_B meant the selective withdrawal of the quote function for persistent offenders will eventually work.

Staff Member
Yes, I believe that's what he meant, I was just trying to clarify the situation

We're not trying to stop people quoting and I hope everyone realises that; if that was the case we would just remove it for everyone.

Staff Member
It seems some people are still confused as to what is and isn't acceptable.

This is acceptable: http://cliptheapex.com/threads/2012-testing-mugello.4923/page-2#post-126112
It's a small quote and the post isn't immediately above. 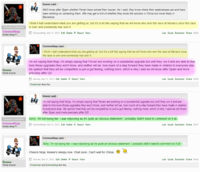 Why not just use the "@" (followed by member's name) every time anyway? That would be clear enough what one's response is about.

Staff Member
The tagging function has only recently been installed but the problem with that is it isn't obvious which post or particular comment is being referred to.