So the contenders appear to be

Valued Member
Here it is: 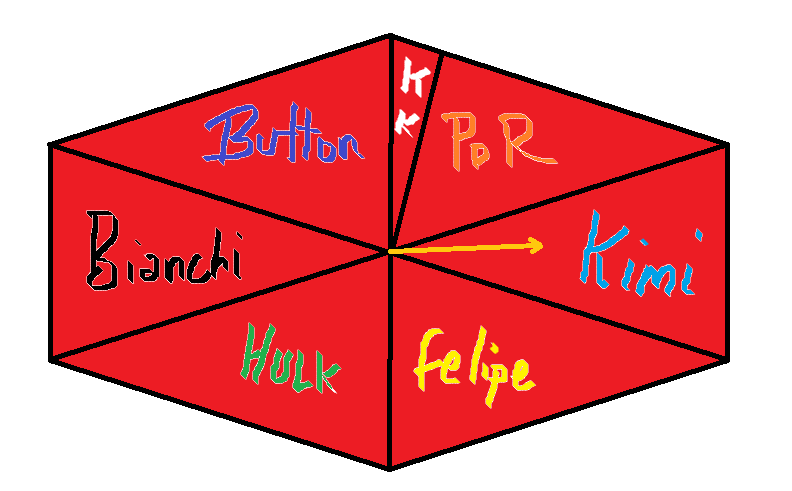 Contributor
teabagyokel I think Felipe is favourite with the Hulk running him a close second, Button is an outsider, just like your excellent chart shows Kimi as being, hence the arrow..

Staff Member
Valued Member
I think it will be one more year for Felipe because Ferrari will leave it too late to do anything else. I would imagine that every agent in town is banging on the Scuderia's door and offering their man to drive for the team. The big advantage that the Hulk will have over Kimi is that the Hulkster would go there for a bucket of fish and a beach ball while Kimi will have the audacity to actually want paying.

While all this wrangling, fish throwing and general agent related banter trickles on, everyone would have quietly forgotten that the new car will have been completed and Felipe baby would have tested it and be sitting in it waiting to go out and set a time in FP1 at the first race of the season next year.

Cue loud and resounding "Bugger" in an Italian accent followed by a "What'a mistake'a to make'a" at the realization they have to spend another year listening to Rob Smedley's dulcet tones coaching a crying Massa around the track while telling him he's not the slowest driver that Ferrari have ever had and if he's a good boy and finishes the race within half a lap of Alonso he can stay up late and maybe have a lolly pop.
Last edited: 3 September 2013

Valued Member
Mephistopheles - The arrow is pictured in one particular moment, it just keeps spinning...
M

Yes I see that now, not much chance of it stopping on KK though....
Last edited: 3 September 2013

Contributor
Il_leone I knew I should of patented 'speculationometer'

Contributor
cider_and_toast I heard from a bloke who knows another bloke who's wife's cousins friend read something, that Massa has this weekend to 'shine' or its curtains.

Contributor
I'm sorry Greenlantern101 I will not take that as gospel unless sources are named...

Is it just me, or will a sudden jump in Massa's speed occur this weekend as if by magic? *

**also known as the Irvine-Barrichello device***

***corrected after reading the post below
Last edited: 3 September 2013

Valued Member
cider_and_toast - It's now only known as the Barrichello device after they turned Irvine's up to full at the 1999 Italian Grand Prix and he still did shit all.
M

Contributor
If I owned a team and one of my drivers only delivered when his contract was on the line then I'd sack him anyway, if you don't give your all for the whole season then you can **** off...

Contributor
I think if Ferrari wanted a Alonso/Hulkenberg line up they'd have signed him last year as a) he was doing better and b) Massa was doing worse so whilst I would be pleased I'd be confused.

Kimi would be amussing but why would Ferrari want two drivers moaning that they don't have Adrian Newy instead of one?

Di Resta might be interesting but would they really put up with a driver who has such a rep for blaming the team for everything? Hey Massa is off the pace but he never blames the team!

Bianchi is one of their own and even sounds Italian but I can't see them putting him in after just one year.

Massa it is then.........unless they offer Button the right amount of cash.

Massa to Sauber and Hulk to Ferrari. Bianchi to Sauber and Gutierrez to Marusia with his millions. Sauber needs the cash but Ferrari will give them the engines almost free so that they allow all the moves above.

Contributor
I'd love to see Hulkenberg get the nod over Massa, but somehow I suspect Ferrari will do their usual dithering until the music stops, and Felipe won't have got out of his seat, because Rob Smedley put superglue on it before the music began...

...oh, and di Resta could never be described as "interesting"!

Why do I keep reading PdR as Pedro de la Rosa? It's confusing me!

Contributor
My top seven contenders in order of likelihood:


Hulkenberg - Probably the most talented younger driver on the grid, or at least has the best reputation. Seems like the obvious choice to me.

Massa - The safe bet in terms of not troubling Alonso. However, he's only really good for 5 decent performances per year. He's hanging on rather than driving the team forward. I think it's about time the Ferrari management decided to shake things up, although I'm not completely convinced they will.

Di Resta - Was quite badly beaten by Hulkenberg in the second half of last year so shouldn't really be getting a top seat ahead of him. Might fit the bill as someone who has some talent but is unlikely to upset the status quo.

Button - Will only leave McLaren if McLaren push him out I think, which is very unlikely. Maybe possible if McLaren decide to go for Kimi.

Bianchi - Promising and has the Ferrari link, but too early for Ferrari to take a punt on him I think.

Raikkonen - It seems to me that neither Ferrari nor Kimi would be overly enthusiastic about working together again. Maybe I'm wrong.

Perez - Very unlikely, but if Button is a candidate I think he has to be too considering his Ferrari link. As for Button, only Kimi moving to McLaren would make this possible.

Contributor
One other thing about next year intrigues me: The car is being designed by Rory Byrne, whose designs, in the hand of Schumacher, routinely drubbed Newey cars. That should render the Alonso crying about Newey irrelevant and make it a "put up or shut up" year for FA.