Irishgreen OK here it is. You sent me a link to Holme's record, but trust me I'm well aware of it. Here's why Ali has the better record than Holmes, and also the best record of any heavyweight in history by a distance.

Ali's career is in two halves, pre and post exile. I don't think Ali immediately pre exile can be beaten by any heavyweight in history and it's a shame we never got to see him at his true peak which would most likely have occurred somewhere between '67 and '70. As it is he was exiled aged 25 due to his stance on Vietnam and was never again quite as spectacularly agile and quick as he was in this here clip from '66
This remains one of the most flawless performances by any boxer in history.

Ali only ever even looked mortal when he was knocked down by Cooper early in his career, however much Henry always made of that one punch, Ali got back up and stopped him in the very next round. Then comes Sonny Liston. Liston remains the most underrated heavyweight champion in history in my view and was seen as indestructible at the time. This was an immensely strong, heavy handed boxer puncher who wrote the book on intimidation. A nasty character for a young guy to have his first title fight against. Clay, as he was known at the time, dominated the fight despite being blinded part way through by a substance on Liston's glove. This is like a rookie F1 driver beating a reigning double world champion over the course of a full season! Returning as Ali he takes Liston out in the first round under dubious circumstances.

He ended the first half of his career with flawless performances over former two time heavyweight champion Floyd Patterson, the freakishly tough George Chuvalo, another cuts stoppage of Cooper, a nasty demolition of Brian London, stoppage of the crafty and technical German Mildenberger, then that beautifully brutal display against Williams. Two fights in '67, one infamously known as the "WHAT'S MY NAME!?" fight, in which he punished Terrel for repeatedly calling him Clay pre fight. Then a KO over the much avoided and dangerous counter puncher Zora Folley. This was the end of his flawless first career, but it's in the second career where things get really impressive...

Having been out of the ring for three and half years and having only two fights since coming back, he faces Smokin' Joe Frazier, the man who became heavyweight champion in his absence. The results of the fight is Frazier wins on points, but that just doesn't do the war justice. This was the most brilliant and determined fight of Frazier's violent career. He fought better on that night than he ever would again and by some distance too. The result was still up in the air until the final five rounds, where Frazier's engine proved greater. Ali was floored by a contender for most powerful left hook of all time in the fifteenth brutal round but got up in a couple of seconds to see out the fight. Frazier won the battle, but at a cost: He spent weeks in hospital recovering and was never quite as good a fighter after.

Although the likes of Ellis, Patterson, Chuvalo, Quarry, Bugner and even light heavyweight Bob Foster may have been competitive in any era, they weren't truly great heavyweights and were all dispatched before Ali was upset by under dog Ken Norton on split decision. Norton had in his corner the great trainer Eddie Futch, who also trained Frazier. Futch was Ali's out of the ring nemesis. Ali looked flat, slow and tired in comparison to the pre exile Ali and it looked like the beginning of the end, especially as an even bigger monster had flattened Joe Frazier by this time. Big George Foreman.

Even after Ali went on a revenge run and picked up wins against Norton and Frazier, it was still seen as a fantasy that he could put a dent in Big George, who'd taken out Norton and Frazier in two rounds each. So, in Zaire, Africa, 10 years after he "shook up the world" against Sonny Liston, Ali knocks out George Foreman in 8 rounds via countering off the ropes and using Foreman's aggression against him. Make no mistake, the Foreman that Ali knocked out would've crushed almost any other heavyweight in history, I'd include Holmes in that.

After Foreman there were more wars: Lyle, Shavers, Norton III (all of these guys could've been champions in any another era) but it was obvious after the bloody savagery that was Ali v Frazier III that he had nothing left. A loss then win to Leon Spinks confirmed Ali as the first ever triple heavyweight champion then retirement. He came out of retirement twice, once against Holmes when he was put on diuretics which totally dehydrated him to make him appear slim and athletic, when in fact he was already suffering from the onset of parkinsons. Holmes was at his excellent, brilliant best and was basically begging the ref to stop the fight before the corner pulled Ali out after 9. Then against Berbick, who would've been unfit to carry the prime Ali's jockstrap, but who beat this version of Ali by decision.

So Ali's record has three top ten all time greats of his division in Liston, Frazier and Foreman. I struggle to think of any other era where any of those three wouldn't have dominated. Plus extremely dangerous contenders and champions such as Patterson, Williams, Folley, Chuvalo, Shavers, Lyle. Most of the best fighters he faced, he faced when noticeably past his best and still won.

Holmes is an all time great on longevity and consistency, but his record is no match for Ali's. Nobody's is. His standout wins are Norton, Shavers and Cooney. Shavers was dangerous, but not what you'd call a great, and even he almost decapitated Holmes. The ref was seconds from stopping it. All credit to Holmes for surviving, but he did have a habit of being put on queer street by guys who shouldn't have been laying a glove on him. The Norton he beat was older than the Norton who gave Ali hell three times, and the win Holmes got was questionable, a split decision in an all out war that couldn't gone either way. Norton had two more fights against meaningful opponents before retiring, both ending in one round KO losses, just to give an indication of how much he had left in the tank.

Cooney was the "great white hope" and appeared to be dangerous, with his size and power but was really a limited puncher who'd forged his reputation against washed up former contenders like Norton and Lyle. After being beaten by Holmes, Cooney would also be knocked out in quicker fashion by blown up light heavyweight Michael Spinks and a 40 year old George Foreman.

Witherspoon had 15 fights when he faced Holmes, he was a novice, and Holmes was extremely lucky to get the decision.

As everything Ali did after Frazier III is tainted by being so far past his best, I don't think it's fair to hold any of Holme's losses post Spinks against him.

So yeah, I'm not trying to disrespect Holmes has he remains quite underrated by history, but if Ali is classed as a modern heavyweight then Holmes doesn't have the best record of any modern heavyweight. Not by a long shot! 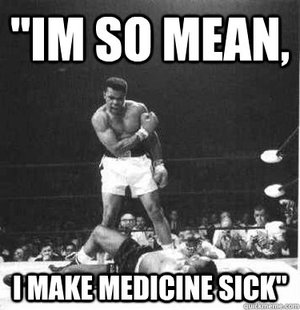 You should consider entering that for the competition.

Contributor
Actually, I thought Ali was never the same after the fights with Frasier. They were all classics, but even the victor in each fight took a terrible pounding. Of course, even when victorious, Smokin' Joe looked the loser, as he always led with his face!

One of the best lines I ever saw from a sportswriter came after Ali's last fight, when he wrote that, in that fight, Ali showed he was now reduced to "sting like a butterfly, float like a B-52"

I freely admit that I don't think any heavyweight since then can compare to Ali.

Excellent piece Evil Whippet.....Ali may have won The Rumble In The Jungle against Foreman, but that pounding that he took with that rope a dope idea, may have hurt him in the end.............He really is the Greatest!

siffert_fan said:
Actually, I thought Ali was never the same after the fights with Frasier. They were all classics, but even the victor in each fight took a terrible pounding. Of course, even when victorious, Smokin' Joe looked the loser, as he always led with his face!

One of the best lines I ever saw from a sportswriter came after Ali's last fight, when he wrote that, in that fight, Ali showed he was now reduced to "sting like a butterfly, float like a B-52"

I freely admit that I don't think any heavyweight since then can compare to Ali.
Click to expand

I think his deterioration had several levels. Post Manila Ali was a parody of himself. That is a great line!

lewy, he certainly did risk a lot with that strategy and took a lot of punishment, but he used a unique blend of toughness and subtle defensive tactics to make it work. Even the iron headed George Chuvalo couldn't stay conscious when Foreman had him on the ropes.

Contributor
I have to admit that Foreman scared the hell out of me! He remains the only heavyweight I have ever seen that lifted his opponent (I forget who) off the canvas with an uppercut. I honestly expected that the blow would have broken the man's neck!

I think that was Joe Fraiser.

The final knockdown of Frazier seems to lift Joe off the canvas, he also sent Norton flying into the ropes. Nasty, chilling power. Makes a lovely grill though.

Contributor
Great article EvilWhippet. As someone who drifts in and out of boxing but has always admired Ali for his out of ring persona I've always thought my DVD copy of "The Rumble in the Jungle" was enough to educate me on how great a boxer the man was. Having read your article I tealise I need to look a bit further.

Check out the "When We Were Kings" documentary. Probably the best sports documentary I've ever seen, narrowly ahead of Senna.

Contributor
I shall add it to my xmas list.

I did watch the Tyson doc recently. He's a scary bloke!

Contributor
Everyone with a tat on their face is scary, he was a pussy before he got that done.

gethinceri said:
Everyone with a tat on their face is scary, he was a pussy before he got that done.


Tyson a pussy before he got that tat....hell....gethinceri before the tat on his face, is when Tyson tried to bite Holyfield

Seriously now Mike Tyson wouldn't stand a chance against me without his tattoo.

Funny thing about the draft: Being dyslexic, Ali failed the IQ test to get into the army, saying after "I said I was the greatest of all time, not the smartest of all time!" So they promptly lowered the pass mark!

Aye, our 'enry managed to nail him once but it was still death by a thousand cuts in the end

God damn they were warriors back then!

RasputinLives said:
I'd put money on you beating him now days as well EvilWhippet
Click to expand 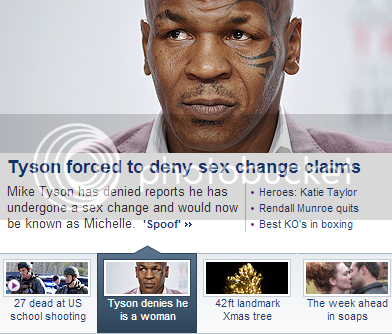 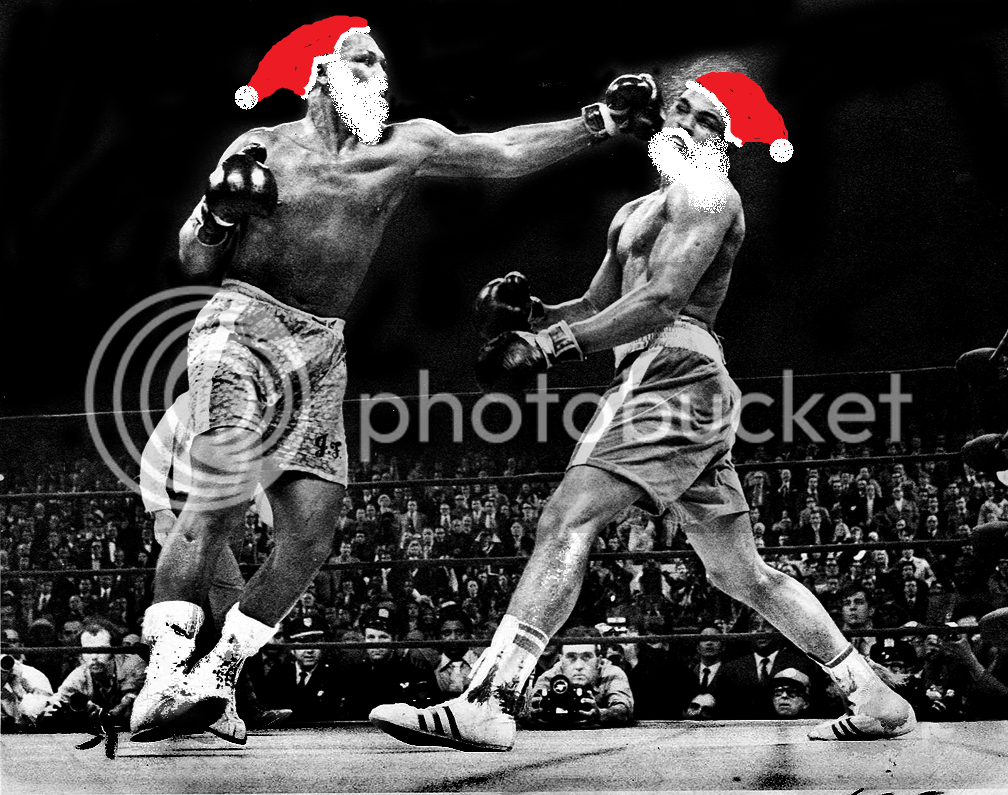